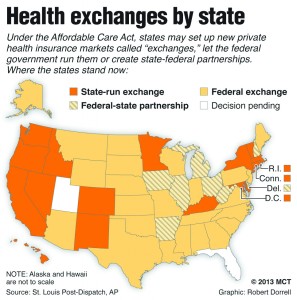 President Barack Obama’s ambitious goal that all Americans have access to health care will take a huge step forward this fall with the opening of federal and state insurance exchanges.

But it is too soon to tell whether these bold creations of the Affordable Care Act will actually bring “affordable” care to consumers. Some observers say that escalating health-care costs will still find ways to tap and drain the bank accounts of small businesses, individuals and families.

With less than seven months until health insurance exchanges begin open enrollment in many states, regulators are scrambling to implement the new law’s most sweeping — and most expensive — changes.

Among the 2,500-page law’s myriad provisions, individuals with preexisting conditions who have been unable to purchase health insurance no longer will be excluded for chronic illness or a history of medical claims. Insurers won’t be able to drop coverage when someone gets sick. Plans will have to offer more generous benefits, such as capping out-of-pocket expenses and providing free preventive care. Premiums for older consumers cannot be more than three times the cost for younger consumers.

Federal and state exchanges were designed to create a robust, competitive market for private insurers to provide affordable coverage to individuals and small businesses. And the Obama administration is gambling that enough small employers and young, healthy Americans will purchase health insurance to ensure the affordability of health premiums for all.

Government subsidies in the form of tax credits will help lessen the impact of more costly premiums on low-income Americans, but the incomes of many households will be too high to qualify for subsidies. This will be even more of a problem in states such as Missouri that refuse to expand Medicaid, leaving many working poor unable to qualify for help.

New policy rates have not yet been made public, but there will surely be winners and losers as insurance companies redistribute the costs of these benefits and begin paying a new tax on health coverage. And pricing for many Americans could run even higher if many of the young and healthy decide to “opt out” of the law’s individual mandate, choosing to pay fines rather than buy costly insurance.

Federal officials are forecasting that an expanded, competitive individual and small-group health insurance market will help slow the growth of health-care spending in the long run. Yet fewer consumers will take advantage of the new market if insurance prices are high at the start.

“You need broad participation from the young and healthy as well as everyone else to make health insurance affordable and for the health exchanges to work,” said Robert Zirkelbach, a spokesman for America’s Health Insurance Plans, a Washington-based trade group whose members include major insurers.

Even given the best scenario, experts say, insurance premiums are likely to rise in 2014.

The U.S. Department of Health and Human Services has churned out thousands of pages of regulations to implement the Affordable Care Act.

A linchpin of the Obama administration’s health overhaul is the establishment of internet-based health insurance exchanges. These virtual marketplaces are slated to begin operating on Oct. 1, offering an “open enrollment” period before 2014.

In this restructured market, consumers will be able to make informed choices from clearly defined policies with no fine print, using the exchanges to compare certified health plans with four different levels of coverage (certified as Bronze, Silver, Gold and Platinum), based on price and quality.

Individuals and families buying health insurance will be guaranteed coverage for preexisting conditions, and the cost cannot vary based on a person’s gender and medical history. But smokers can be charged more for individual insurance policies because of their heightened risk of cancer and other chronic diseases.

The plans also must include “essential benefits” such as hospital, emergency and maternity care, prescription drugs and mental health coverage, as well as certain preventive services such as mammograms and colonoscopies, without cost-sharing. There are prohibitions on lifetime and annual limits on coverage.

This article appeared in print on page 3 of the March 11th, 2013 edition of Hamodia.