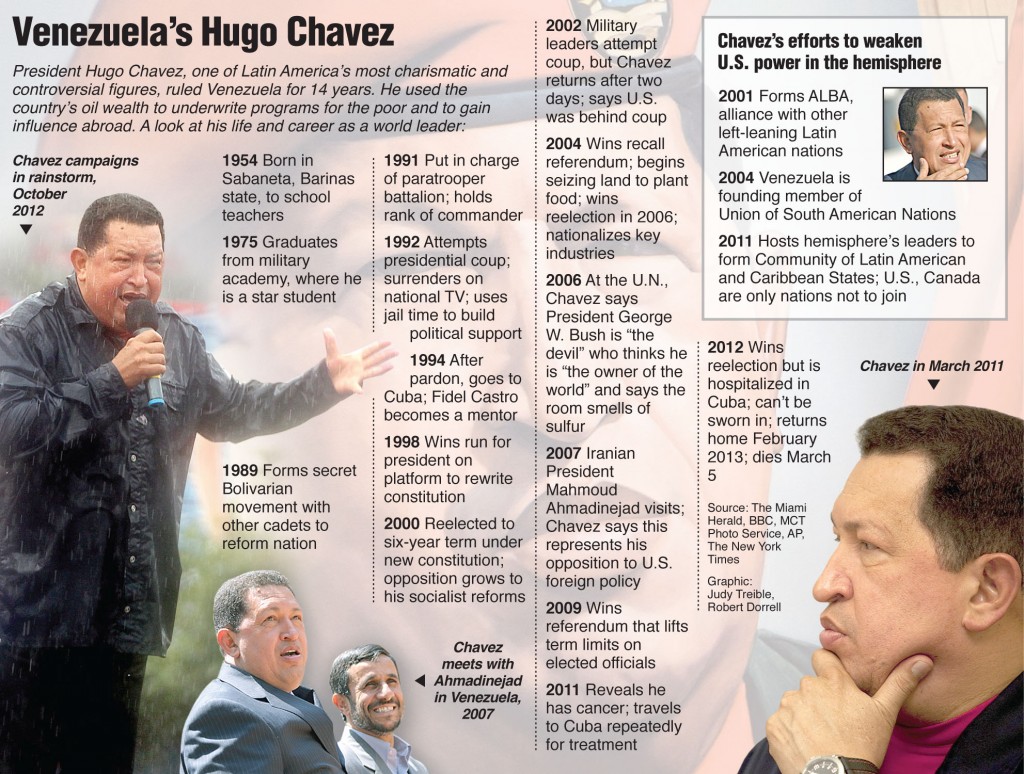 Venezuelans mourned the death of Hugo Chavez and prepared on Wednesday for his body to lie in state as attention turns to a new election to succeed the socialist leader after 14 years of tumultuous and divisive rule.

The 58-year-old president died on Tuesday after a two-year battle with cancer that was first detected in his pelvis. He had suffered multiple complications following his latest operation on Dec. 11 and had not been seen in public since then.

The future of Chavez’s self-styled leftist revolution, which won him passionate support from some but alienated others who called him a dictator, now rests on the shoulders of his preferred successor, Vice President Nicolas Maduro.

“In the immense pain of this historic tragedy that has affected our fatherland, we call on all the compatriots to be vigilant for peace, love, respect and tranquility,” Maduro said.

“We ask our people to channel this pain into peace.”

Maduro, a 50-year-old former bus driver and union leader, will be the government’s candidate at a new presidential election that is likely to pit him against opposition leader and state governor Henrique Capriles.

Much of Caracas was quiet overnight, with streets deserted especially in richer parts of the capital. Most shops locked their doors as the news spread, fearing looting.

Despite having weeks to come to terms with their leader’s likely demise, Chavez supporters were wrought with grief.

“He was our father,” said Nancy Jotiya, 56, sobbing in Caracas’ central Plaza Bolivar. “He taught us to defend ourselves. Chavismo is not over! We are the people; we will fight!”

Messages of condolences for Chavez’s death came from around the world, ranging from U.N. Secretary General Ban Ki-moon and U.S. President Barack Obama.

Obama said his administration was interested in “developing a constructive relationship with the Venezuelan government.”

Chavez easily won a new six-year term at an election in October and his death shocked millions of supporters who loved his folksy charisma, anti-U.S. diatribes and oil-financed projects to improve life for residents of long-neglected slums.

Critics, however, saw his one-man style, gleeful nationalizations and often-harsh treatment of rivals as evidence he was a dictator whose misguided statist economics squandered a historic bonanza of oil revenues.

Just hours before Chavez’s death, however, Maduro alleged that “imperialist” conspirators had infected the president with cancer among a plethora of conspiracies with domestic opponents.