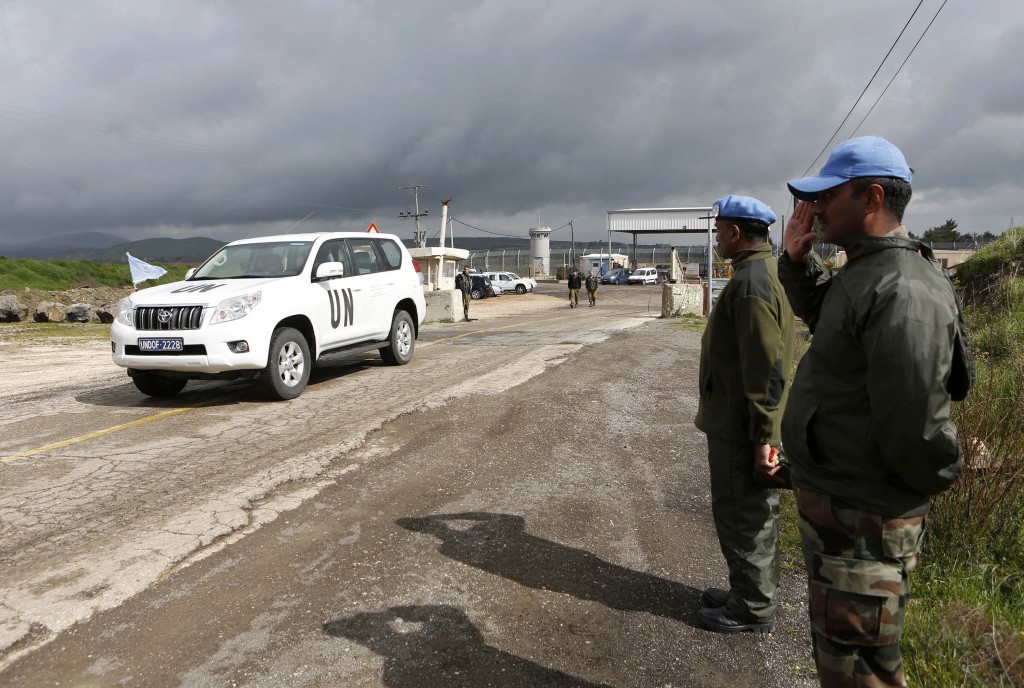 Armed fighters linked to the Syrian opposition detained more than 20 U.N. peacekeepers Wednesday in the increasingly volatile zone separating Israeli and Syrian troops on the Golan Heights, a new escalation in the spillover of Syria’s civil war.

The U.N. Security Council demanded their immediate and unconditional release.

The capture comes a week after the announcement that a member of the peacekeeping force, known as UNDOF, is missing.

Russia’s United Nations Ambassador Vitaly Churkin, the current Security Council president, said talks are under way between U.N. officials from the peacekeeping force and the captors.

U.N. peacekeeping chief Herve Ladsous, who briefed the council behind closed doors, identified the captors as being from a group associated with the Syrian armed opposition, Churkin said.

“There was no fighting, according to his briefing to us,” Churkin said. “My understanding is that they took over the trucks in which the UNDOF personnel was moving around.”

Del Buey said about 20 U.N. observers were on a regular supply mission when they were stopped by approximately 30 armed fighters near an observation post that was damaged in heavy combat last weekend and had been evacuated.

A video posted online by activists showed a group of armed rebels standing around at least three white U.N. vehicles with the words UNDOF on them, allegedly in the village of Jamlah bordering Israel in Daraa province.

The video, circulated by the Syrian Observatory for Human Rights, said the peacekeepers being held by the rebels are 20 Filipinos.

It accuses the peacekeepers of assisting the Syrian regime to redeploy in an area near the Golan that the fighters had seized a few days ago in battles that left 11 fighters and 19 regime forces dead.

Churkin said the capture of the peacekeepers “is particularly unacceptable and bizarre [because] UNDOF are unarmed and they have nothing to do with the situation in Syria.”

“They are there on a completely different mission so there is no reason at all under any circumstances, any kind of sick imagination to try to harm those people,” he said.

Churkin urged countries with influence on the Syrian opposition to use it to help free the peacekeepers. He did not name any countries but Qatar, Saudi Arabia and Turkey are known to have been providing military aid to some Syrian rebel groups.

Israeli officials have grown increasingly jittery as the Syrian war moves closer to Israel. There have been several instances in which stray fire has landed in the Israeli-controlled Golan Heights, and Israel is concerned that Syrian weapons could fall into the hands of hostile groups and be used against Israel.

Human Right Watch, meanwhile, is investigating whether the same rebels linked to seizing the peacekeepers were involved in the executions of captured regime soldiers in another incident around Jamlah several days ago.

The U.N. force was established in 1974 following the 1973 Yom Kippur war to monitor the disengagement of Israeli and Syrian forces and maintain the cease-fire. Israel captured the Golan Heights from Syria in 1967 and Syria wants the land returned.

U.N. Secretary-General Ban Ki-moon has warned of escalating military activity along the Israeli-Syrian border as a result of the intensifying Syrian conflict, which began in 2011 and has cost more than 70,000 lives.