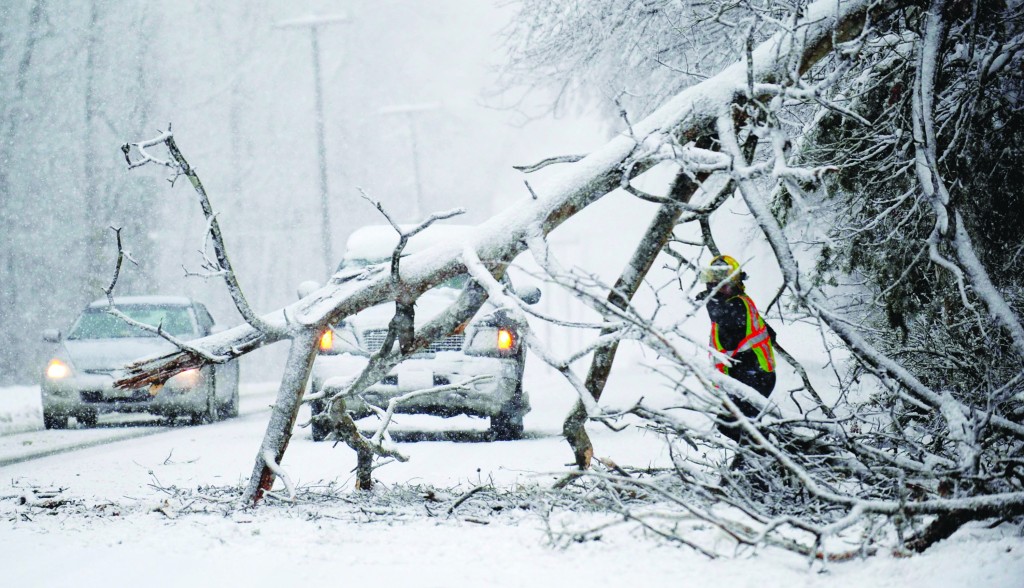 A winter storm marched into the Mid-Atlantic region Wednesday, dumping more than a foot of snow in some places and knocking out power to nearly 200,000 homes and businesses. The severe weather largely spared the nation’s capital, yet the typically bustling city had all but shut down because officials didn’t want a repeat of 2011, when a rush-hour snowstorm stranded commuters for hours.

The storm pummeled the nation’s midsection on Tuesday, killing at least three people in weather-related traffic accidents. It was forecast to turn to the northeast on Thursday, bringing strong winds, more snow and the possibility of coastal flooding to New England.

In Washington, the storm dubbed the “snowquester” — after the wonky “sequester” term for $85 billion in federal budget cuts — did little harm as falling snowflakes rapidly melted amid warmer-than-expected temperatures.

There were worse problems elsewhere in the region, though.

Lashing winds blew off part of the roof of a Stone Harbor, N.J., condominium complex and Ocean City officials advised residents to move their cars to higher ground in preparation of possible flooding. Maryland’s Bay Bridge, which connects Maryland’s Eastern shore with the Baltimore-Washington region closed in both directions, because of high winds. A tractor-trailer overturned on the bridge.

In Virginia, Gov. Bob McDonnell declared a state of emergency and directed state agencies to let employees work from home, while about 50 National Guard soldiers were sent out to help clear roads. Utilities scrambled to restore power after fierce wind and heavy, wet snow snapped tree limbs and knocked out electricity to 170,000 customers in that state alone. Hundreds of car wrecks were reported.

In Richmond, most commuters appeared to be headed home by midday with the exception of Clint Davis, an attorney who was needed in in U.S. Bankruptcy Court.

“Unless they canceled court, I had to be here,” said Davis, who was wearing a hooded slicker over his suit to shield himself from gobs of snow blown from trees. “I’ll be here for two or three hours and come out to a snow-covered car.”

The closure of many schools and offices helped ease traffic in the District of Columbia. Some Metro transit system bus routes were suspended or detoured, though trains were running on a normal schedule — albeit with an “anemic” passenger load, said spokesman Dan Stessel.

The Baltimore-Washington area’s last major snowstorm struck Jan. 26, 2011. It hit Washington during the evening rush hour, causing some motorists to be stuck in traffic nearly overnight. It dropped 5 inches on Washington and 7.8 inches on Baltimore, knocked out power to about 320,000 homes and contributed to six deaths. The federal government later changed its policies to allow workers to leave their offices sooner or to work from home if major storms are expected.

Still recovering from Superstorm Sandy, the Jersey Shore, along with other parts of the Northeast, prepared for another possible hit. The storm should bring rain and snow, but one of the biggest problems could be flooding in areas where dunes were washed away and many damaged homes still sit open and exposed. Those areas could get 2 to 4 inches of snow.