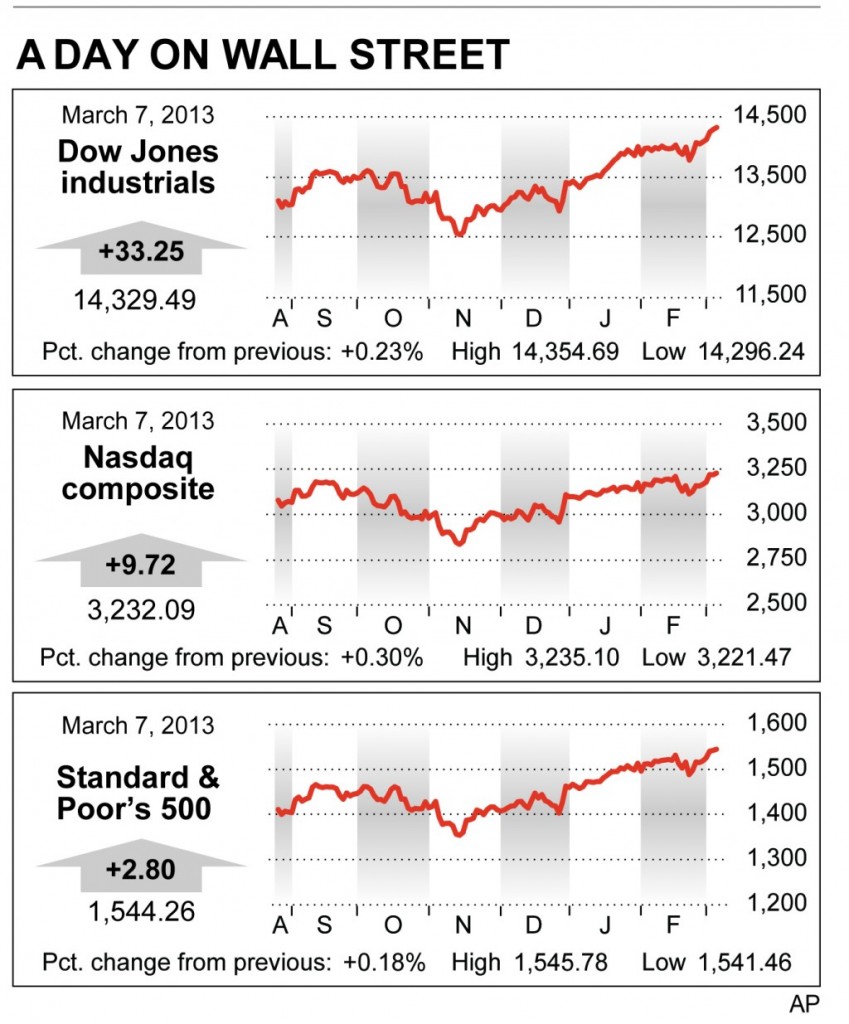 The Dow pushed further into record territory Thursday, having surpassed its previous all-time high two days ago. The catalyst was the latest evidence that hiring is picking up.

Stocks started higher after the Labor Department reported that the number of Americans seeking unemployment aid fell by 7,000 last week, driving the four-week average to its lowest in five years. The drop is a positive sign ahead of Friday’s employment report.

The Dow barreled through a record high Tuesday and has added to its gains since then. The S&P 500 is also closing in on its own record high of 1,565, which was also reached on Oct. 9, 2007, the same day of the Dow’s previous peak. The S&P would need to rise 21 points, or 1.3 percent, to set a record.

Investors have been buying stocks on optimism that employers are slowly starting to hire again and that the housing market is recovering. Growing company earnings are also encouraging investors to get into the market. The Dow is 9.4 percent higher this year, and the broader S&P 500 is up 8.3 percent.

Boeing gained Thursday, advancing $1.97, or 2.5 percent, to $81.05 following reports that U.S. regulators were poised to approve a plan within days to allow the plane maker to begin test flights of its 787 Dreamliner. The 787 fleet has been grounded since Jan. 16 because of safety concerns about its batteries. Twenty stocks in the 30-member index advanced.

The Federal Reserve will release the results of its annual stress test for banks after the market closes Thursday. Financial stocks advanced amid speculation that banks will have amassed enough capital to be able to return more cash to shareholders. Bank of America had the largest percentage gain in the Dow, rising 34 cents, or 2.9 percent, to $12.26, with JPMorgan Chase in the third spot, gaining 60 cents, or 1.2 percent, to $50.63.

The stock market’s rally this year has been helped in no small measure by continuing economic stimulus from the Federal Reserve. The U.S. central bank began buying bonds in January 2009 and is still purchasing $85 billion each month in Treasury bonds and mortgage-backed securities.

That has kept interest rates near historic lows, reducing borrowing costs and encouraging investors to move money out of conservative investments like bonds and into stocks.

The yield on the 10-year Treasury note, which moves inversely to its price, rose to 2 percent from 1.94 percent.