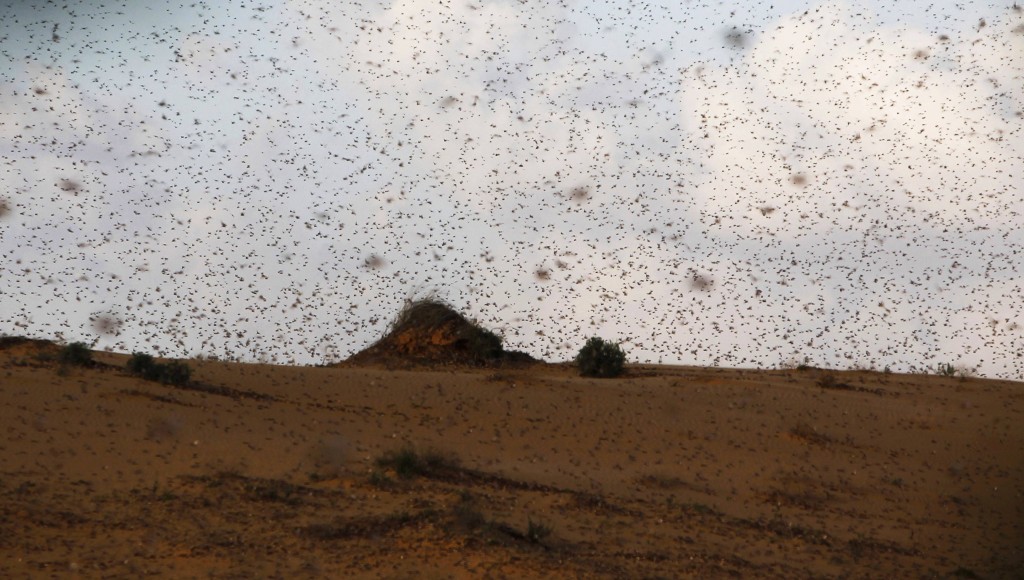 What began as a minor border crossing of thousands of locusts on Monday had grown into sky-darkening swarms numbering in the millions by late Tuesday.

Teams of Agriculture Ministry workers were sent out with pesticides at Kadesh Barnea in the Negev at first light Wednesday, distributing both aerial and ground sprays in the area where masses of the destructive insects had descended upon southern Israel from Egypt’s Sinai Peninsula.

The invasion promises to be short-lived, however. The
U.N. Food and Agriculture Organization (FAO), which is keeping a close watch on the situation, said that a small number of locusts would continue up to the Negev and might reach the adjacent Arava Valley areas in Jordan, but from Wednesday the possibility of additional swarms hitting Israel and Jordan would decline greatly, as winds would likely shift.

A few of the bugs were sighted in Shuk Hacarmel in Tel Aviv as they had the Cairo market, nothing of plague-like proportions.

Ramat Gan resident, Ofir Auslander, told The Jerusalem Post that he and his wife had discovered a locust on Monday night on their apartment terrace.

“I discovered it after I stepped on it, when I went to move my tulip plants from the living room window into the kitchen,” he said. “[I was] following an ‘inner voice’ that told me to protect them in case the locusts arrived at Ramat Gan at night when I was sleeping or when I was at work the next day. I did not want to abandon the tulips.”

Auslander and his wife had already sprayed insecticide that morning inside the apartment, so the locusts had not ended up flying all over their home.

Prof. Amir Ayali, a locust expert at Tel Aviv University’s Zoology Department, said he had heard reports of people seeing single or small groups of locusts as far north as the Carmel region.

Ayali admitted to a miscalculation of the infestation. Based on weather and wind forecasts, he thought that the locusts would not enter Israel, heading eastward to Saudi Arabia instead.

“Even though this swarm did enter Israel, it is still a mini-swarm in a way,” he said. “We need to wait and see what happens.”

Ayali predicted that the locusts would mostly die after being “sprayed like crazy” on Wednesday morning, and those that did not die would fly away. But not one to waste an entomological opportunity, he announced a locust observation expedition at 4 a.m. on Wednesday.

Meanwhile, the Ramat Hanegev Regional Council reported residents encountering thousands of the bugs throughout the day on Tuesday, from Nitzana to Sde Boker, and sealing their homes against the creatures.

Thus far, no widespread crop damage has been reported.

However, potato farmer Pavel Rosenfeld, who lives about 2 miles from the Egyptian border, said 30 to 40 percent of his land had already been damaged.

“Everything depends on the wind … and we are praying that the wind doesn’t bring us more,” he said on Army Radio.