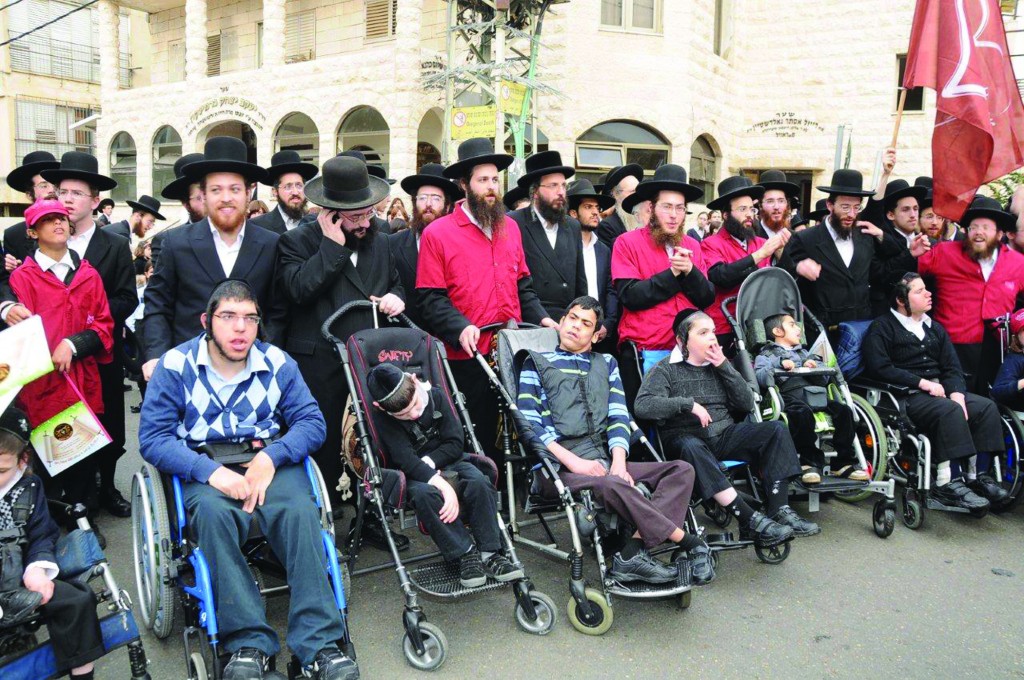 So Many Tears, So Much Joy

The thousands who joined the hachnasah, including the children from dozens of Talmud Torahs in Bnei  Brak, danced and sang to the beat of the drums and the music coming from the van that led the procession, yet all along the way one saw grown men wiping away tears, others going to a side and crying. Only after composing themselves did they return to the lively dancing.

What was it that so moved the varied crowd?

The Stars of the Event

At Refuah Viyeshuah the central figures are the special-needs children.

They were the baalei simchah at the hachnasas sefer Torah, and it was only natural for them to dance around the sefer Torah that will serve their beis medrash, in the malonit they stay at for Shabbos, Yom Tov or whenever their family is unable to care for them at home. The children had never before been the center of the town’s attention, and they made the most of it — clapping and dancing as well as they could.

Many of the special children were carried on the shoulders of “their” avreich, the young man who cares for the child at the chol hamoed camps and at the malonit. The wheelchair-bound children were also honored, leading the dancing and smiling.

When the procession came to the crossroads before the malonit, the special children formed a large circle, with their caretakers dancing and jumping to the cheerful music.

Outside the malonit was a sephardic man, clapping and dancing. When he saw one of the volunteers looking at him, trying to recall the name that belonged to the familiar face, the man said: “You’re a Refuah Viyeshuah volunteer? Tell me, what’s it like to look after one of these children for a few hours?”

The volunteer didn’t know what to answer. “It can be pretty frustrating, can’t it?” the man continued.

The volunteer smiled and nodded in agreement.

“Well, I am a father of one of those children, and you can imagine what our life is like. That is why I understand and appreciate your devotion and your work.”

His child loves music, the man continued, and when the tape recorder is blaring the family has some peace. “But Shabbos and Yom Tov are hard, and the two days of Rosh Hashanah — oy, Hashem yerachem! Now can you understand what the Refuah Viyeshua Rosh Hashanah program, which takes care of the children for the two days, means to us?”

And he burst into tears …

Witnessing this occasion, could a single eye stay dry?

Chaim Silberberg took part in all Refuah Viyeshuah activities, always looking after the same child. His commitment to the child went much further than Refuah Viyeshuah: he would often take the child to his home for Shabbos, and was in frequent contact with the parents.

This year’s Sukkos camp started out no different from any other: Chaim was there with the child he cared for so warmly. But on the morning of the second day, the other helpers noticed the child walking around in a neglected state. It was inconceivable that Chaim would neglect a child, and especially the child who was his responsibility, the child he was so attached to. What could it mean?

The yungeleit went to Chaim’s room — and found him lying on his side, lifeless, having died in his sleep of heart failure.

The sudden and untimely petirah shocked everybody.

Chaim was a rebbi in the Gerrer Talmud Torah, and five-year-old Efraim G. from the Talmud Torah told his father on the day of the hachnasas sefer Torah “I remember rebbi Chaim, I loved him!”

When the father questioned the child he insisted “Of course I remember him, everybody loved him! And he loved all the kids as well…”

For the Werdigers, the petirah that happened in their camp was a great shock. They were determined to perpetuate the name of the devoted volunteer who left this world without offspring.

A Natural Home for the Sefer

The malonit was established by the Werdigers to accommodate the special-needs child when the family needed respite, on Shabbos or Yom Yov, at the wedding of one of his siblings, or other occasions.

The service is open every day of the year. Even the Seder is conducted there, by volunteers who give up their private Seder to help others.

Tefillos also take place in the malonit, and up to now a sefer Torah was borrowed for the beis haknesses. Now, though, Refuah Viyeshuah has a sefer of its own.

When the last letters in the sefer Torah were written, Chazan Benzion Groweiss recited a moving Kel Malei Rachamim in memory of Reb Chaim, after which Reb Shlomo Werdiger made hagbahah and the Torah was dressed in its new mantel.

But before going out to dance the sefer to its new home, the Torah’s crown had to be placed on the new sefer, and who would be better for that than the child under Chaim’s care?

A hush fell on the gathering as the young boy, shaking, held the large crown and placed it on the new sefer Torah.

And as the crowd looked on, he bent down to the Torah and gave it a hug and a kiss — a last goodbye to his beloved caretaker, Chaim.

In honor of the hachnasas sefer Torah, a seudah was held the same evening in the Gerrer Beis Medrash on Rechov Ralbach in Yerushalayim.

Hundreds of Refuah Viyeshuah volunteers, including the many drivers and other helpers, were the main guests, with reserved seats and a lavish four-course meal served in the large beis medrash and the galleries. Special tables were set aside for the Werdigers’ family and friends.

The event was graced with the participation of Rabbanim and Rebbes, shlita, including the Toldos Avraham Yitzchak Rebbe, the Toldos Aharon Rebbe, the Pittsburgher Rebbe, the Sochatchover Rebbe and the Rachmastrivka Rebbe.

The proceedings commenced with a speech by Rabbi Moshe Aryeh Weinstein of Ichud Mosdos Gur (the umbrella organization to which Refuah Viyeshuah belongs), after which a special choir entertained. The music was played by Meir Adler, who performs with Ahron Samet (as volunteers of course) at every Chol Hamoed Refuah Viyeshuah event.

Silence reigned when the Gerrer Rebbe entered the beis medrash and took his place on the dais.

After the Rebbe distributed l’chaim, he told Reb Shlomo to address the crowd.

Reb Shlomo began his speech by noting that it was the yahrtzeit of the Chiddushei Harim. The Chiddushei Harim said that he had to work for 22 years on the trait of ayin tovah; the Beis Yisrael, said Reb Shlomo (in whose beis medrash the event was taking place) also gave away everything for others.

“The Beis Yisrael set this as a fundamental principle in Yiddishkeit: to help others — children, bachurim and people from all circles,” he said.

Reb Shlomo continued, again quoting from the Chiddushei Harim: the chasidah is listed as a non-kosher bird, yet Rashi says that the chasidah gets its name because it does chessed with its friends.

“If it does chessed, why is it non-kosher?” asked the Chidushei Harim. “Because it does chessed only with its own kind, and not for others. Our chinuch is to help everybody!”

Reb Shlomo heaped praise on the Refuah Viyeshuah volunteers, saying that they sacrifice their most precious personal times for others, a “korban la’Shem.”

“They could be at home with their families, learning in the shtiebel, and making Chol Hamoed an uplifting time; but they sacrifice all this to help others. We are now commemorating another sacrifice, that of the Refuah Viyeshuah soldier whose life ended in the middle of this avodas hakodesh.”

Reb Shlomo concluded by quoting the Chiddushei Harim once again:

“Right before Moshiach comes, the avodah demanded of us is chessed, as the Gemara says concerning Avraham Avinu, whose middah is chessed: becha chosmin, with your middah the galus will end. In the zchus of the myriad deeds of chessed performed by all those here in this hall may we arrive at the geulah sheleimah, bi’as Moshiach, u’malkeinu berosheinu.”

Rabbi Shmuel Gelkopf of Refuah Viyeshua delivered the organization’s blessings to the Werdigers. He read aloud a touching letter sent to Refuah Viyeshuah by “the mother of Moishy,” describing how their family life has changed for the better since Moishy started attending Refuah Viyeshuah activities.

In his grammen, Rabbi Moshe Weintraub, a Refuah Viyeshuah volunteer, sang of the Werdigers’ maasim tovim and of Reb Shlomo’s closeness to the Beis Yisrael and the subsequent Rebbes. The dinner ended with a spontaneous dance, which went on for a long time.

Before Birkas Hamazon, Reb Chaim’s father, Rabbi Avraham Binyamin Silberberg of Haifa, still mourning the loss of his only son, was called to the dais.

After delivering a few divrei Torah, he turned to Reb Shlomo and said: “As you mentioned, true chessed means doing chessed to those who are not close to you. So what could be a greater and truer chessed than what you have done, donating a sefer Torah in the name of my son whom you never knew personally?”

And wiping away a tear, he returned to his seat.