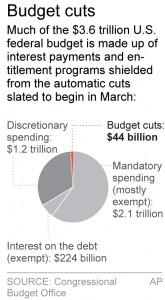 The spending cuts are here to stay if you believe the public posturing Sunday.

So after months of dire warnings, Washington didn’t implode, government didn’t shut down and the $85 billion budget trigger didn’t spell doom. And no one has a tangible proposal for rolling back those cuts.

“This modest reduction of 2.4 percent in spending over the next six months is a little more than the average American experienced just two months ago, when their own pay went down when the payroll tax holiday expired,” McConnell said.

“I don’t know whether it’s going to hurt the economy or not,” Boehner said. “I don’t think anyone quite understands how the sequester is really going to work.”

And Sperling, making the rounds on the Sunday news shows, added: “On Day One, it will not be as harmful as it will be over time.”

Both parties cast blame on the other for the automatic, across-the-board spending cuts but gave little guidance on what to expect in the coming weeks. Republicans and Democrats pledged to retroactively undo the cuts but signaled no hints as to how that process would start to take shape. Republicans insisted there would be no new taxes and Democrats refused to talk about any bargain without them.

“That’s not going to work,” said Sen. Kelly Ayotte (R-N.H.). “If we’re going to increase revenue again, it’s got to go to the debt with real entitlement reform and real tax reform when you actually lower rates. … I’m not going to agree to any more tax increases that are going to go to increase more government.”

All of this comes ahead of a new, March 27 deadline that could spell a government shutdown and a debt-ceiling clash coming in May.

Boehner said his chamber would move this week to pass a measure to keep government open through Sept. 30. McConnell said a government shutdown was unlikely to come from his side of Capitol Hill. The White House said it would dodge the shutdown and roll back the cuts, which hit domestic and defense spending in equal share.

Obama has phoned lawmakers but it isn’t clear to what end; the White House refused Sunday to release the names of lawmakers Obama phoned. Boehner and McConnell said they had a productive meeting with Obama on Friday, but it didn’t yield a deal.

This article appeared in print on page 1 of the March 4th, 2013 edition of Hamodia.

See It? Squish It! Fighting the Invasive Spotted Lanternfly