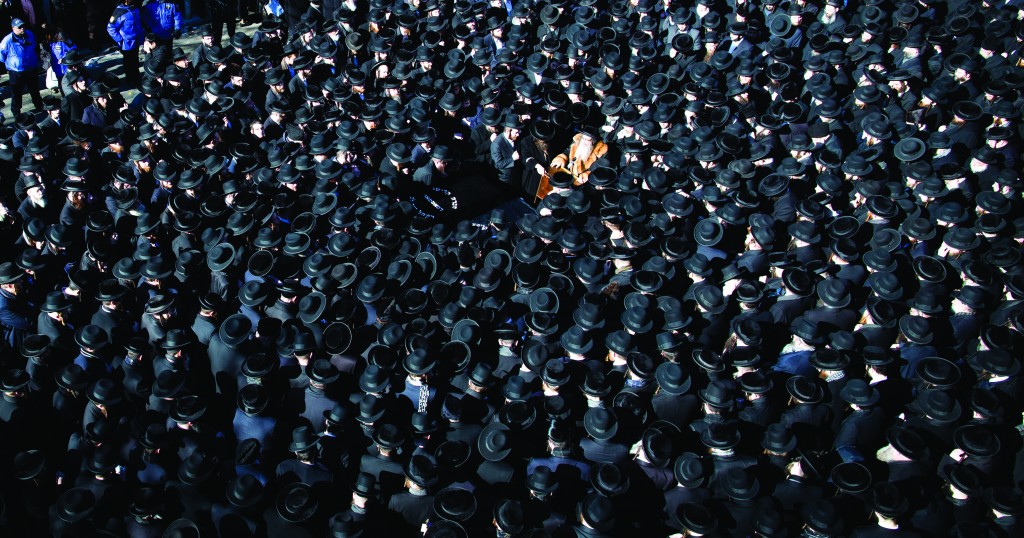 Shock and disbelief gave way to deep mourning throughout the Jewish community as news spread of a devastating tragedy on Motzoei Shabbos, when Reb Nachman and Mrs. Raizy Glauber, z”l, both 21 years old, died in a car crash. The couple were on their way to Long Island Jewish Hospital when the car service in which they were riding was hit by a speeding BMW; both passengers died in the collision.

Their baby boy was born prematurely and is in serious condition in Bellevue Hospital. The driver of the car service is reported to be in stable condition.

The news spread rapidly on Sunday morning, prompting an outpouring of grief well beyond the closely-knit Williamsburg community where the young couple resided. In Boro Park, a 20-minute drive away, strangers standing in shuls, homes and on street corners wiped away tears and uttered tefillos for the orphaned baby.

Massive crowds packed the streets to overflowing, and heartrending wails filled the air during the levayah, which began on Sunday afternoon in Williamsburg. The levayah then continued in Monsey, where Nachman was raised.

Conversations with acquaintances painted a portrait of an exceptional couple, whose life revolved around serving Hashem and helping others.

“He always had a good word to say to everyone,” a friend said. “When the bachurim organized a visit to kivrei tzaddikim or chipped in for any other purpose, Nachman would be the one to pay for those he knew couldn’t afford it.”

Every night before going to sleep he learned sefer Chovos Halevovos, and was often seen reviewing the words of Ani Maamin. He also excelled in the mitzvah of kibbud av va’eim.

Raizy, a student of Bnos Rochel of Satmar in Williamsburg, was remembered as an extraordinary individual who gave chizuk to others in their time of need.

Numb with grief, members of the Zilberstein family were too distraught to speak to Hamodia about Raizy on Sunday.

At the levayah in Williamsburg, her father, Reb Yitzchak  Zilberstein, shouted out the words of the first of the 13 declarations of Ani Maamin: “I believe with complete faith that the Creator, Blessed is His Name, creates and guides all creatures…”

Reb Nachman’s parents had celebrated the birth of a child only two weeks ago.

The collision of the speeding grey 2010 BMW sedan and the car carrying the Glaubers occurred at the intersection of Wilson Street and Kent Avenue in Williamsburg. The BMW’s driver and a passenger fled the scene and are being sought by police.

Several maspidim implored the public to daven for the newly-born infant boy.

Less than a week ago, Klal Yisrael read in the Megillah about another child born under similarly tragic circumstances. Esther, who lost her father before birth and her mother at birth went on to save the Jewish people from annihilation. The famed Amora’im Rabi Yochanan and Abaya, were also orphaned from both parents at birth.

Rabbi Yaakov Dovid Klar, director of Outreach, Chai Lifeline’s Project Chai, who spent the night at the family’s side, said that he was in awe of the community’s response.

“What I saw last night was unbelievable,” Rabbi Klar said. “The way the community has rallied around these families, was incredible, and was a true kiddush Hashem. The community made it clear that it will do all it possibly can to be there for the family members as they deal with this most terrible tragedy.”