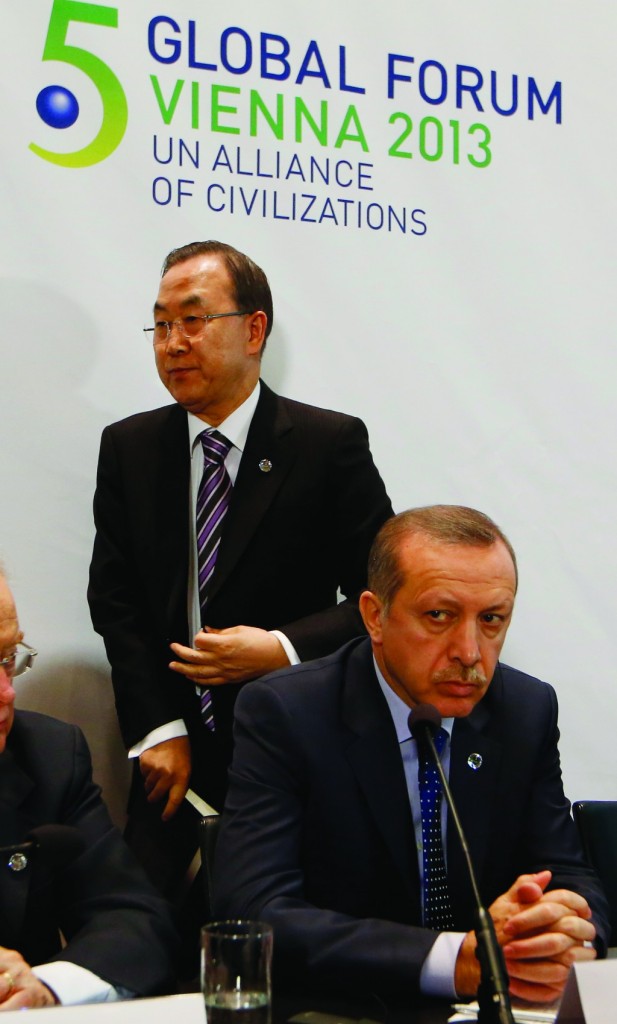 Turkish Prime Minister Recep Tayyip Erdogan on Thursday called Zionism “a crime against humanity,” a comment that drew a fierce response from Israeli Prime Minister Binyamin Netanyahu, who termed it “sinister and mendacious.”

In an outburst that suggested recent signs of reconciliation between his country and Israel should not be overstated, Erdogan dragged the subject of Zionism into a speech about Islamophobia in Europe at the opening session of the fifth U.N. “Alliance of Civilizations” in Vienna.

“Just like Zionism, anti-Semitism and facism, it becomes unavoidable that Islamophobia must be regarded as a crime against humanity,” the Turkish leader told the gathering.

Departing from his policy of restraint in the face of similar incitement by Erdogan in recent months, Netanyahu struck back this time, saying, “This is a dark and libelous statement, the likes of which we thought had disappeared from the world.”

The Alliance of Civilizations was founded in 2005 as a joint initiative of the governments of Turkey and Spain under the auspices of the U.N.

Erdogan’s comment came after a report earlier this week that quoted Israeli officials who said Israel has sent messages to Ankara during the past two weeks aimed at promoting a more “positive dynamic” in bilateral relations.

And just a few days ago, Erdogan had a meeting in Ankara with German Chancellor Angela Merkel, during which the two discussed the need for diplomatic reconciliation between Turkey and Israel, among other issues.

According to the government official, the diplomatic initiative reflected a recognition in Israel that restoring ties to the pre-Erdogan era a decade ago would be unrealistic but that there is a possibility for some improvement.

Erdogan’s remark about Vienna indicated that the Israeli diplomats had reason to be cautious.

The official, speaking with The Jerusalem Post, also refrained from saying whether a recent decision by the defense firm Elta to deliver to Turkey $100 million of equipment for four airborne warning and control systems (AWACS), or an Israeli offer earlier this month to lay a natural gas pipeline through Turkey to Europe, were part of a concerted effort to reach out to the Turks.

Turkey did not respond to the pipeline offer.

“There are many reasons why the current situation is unsatisfactory,” the official said. “Both sides would seem to have an interest in a better relationship, first and foremost with regard to Syria, where the growing fragmentation is leading to weapons in the hands of different extremist groups. There are other reasons why you would think that Turkey and Israel would find it advantageous to have a more positive relationship.”

Meanwhile, the Prime Minister’s Office refused comment on a media report that National Security Adviser Yaakov Amidror met three weeks ago in Rome with the director general of the Turkish Foreign Ministry.