General Dow Edges Near Record, Then Sputters; Stocks Down 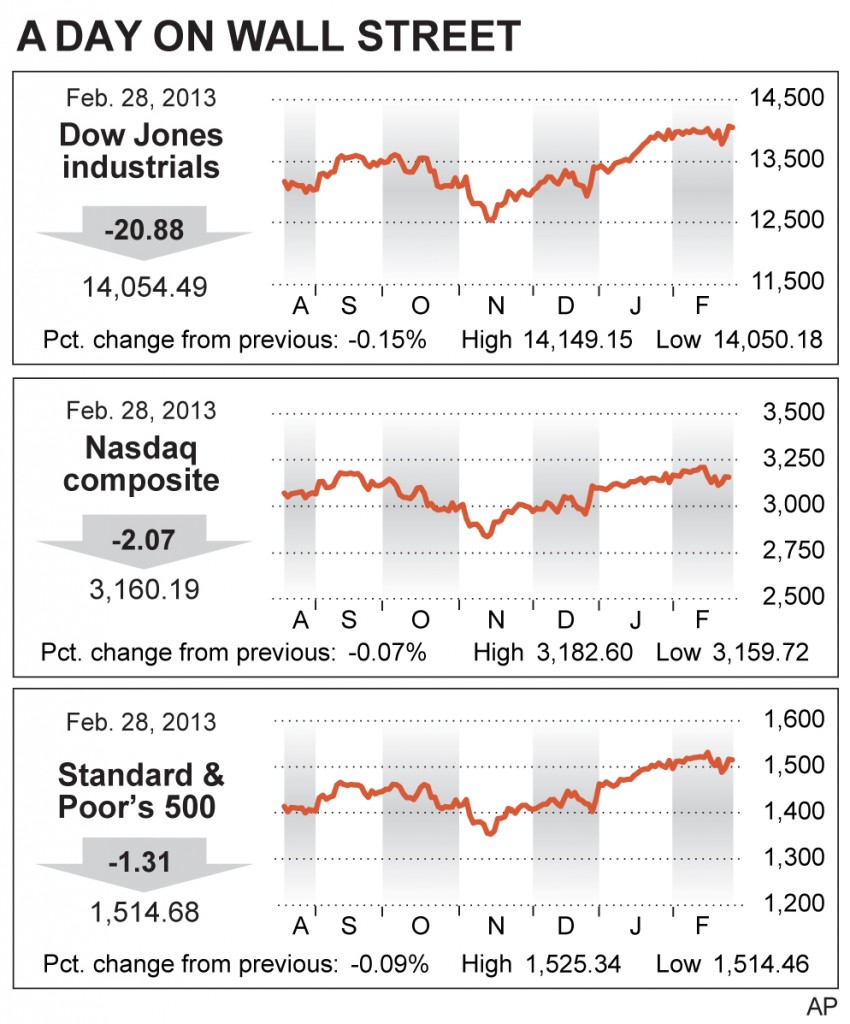 The Dow Jones industrial average came within 15 points of its all-time high Thursday afternoon. But the momentum petered out, and the Dow and other indexes broke a two-day winning streak and closed lower.

Economic data and company reports reflected an economy beating investors’ low expectations rather than one growing like gangbusters. Impending government budget cuts also cast a pall for some investors.

“There was no dramatic, great news,” said Leon LaBrecque, CEO of LJPR in Troy, Mich. “There’s no remarkable economic information. Earnings are pretty much mixed.”

The day started with the stock market plodding along before sending investors on a whipsaw journey. After gaining a combined 291 points on Tuesday and Wednesday, the Dow spent Thursday morning darting between small gains and losses.

Then the rally sputtered and stocks turned lower in the final few minutes of trading.

Some said the market’s fleeting gain Thursday was more about its general tendency to rise over time and not necessarily a reflection of a surge in strength for the U.S. economy.

“People have to separate the economy from the stock market,” said Ed Butowsky, managing partner of Chapwood-
Finance.com in Dallas.

Thursday’s data didn’t provide a clear picture on the economy.

Company earnings were mixed. J.C. Penney and Barnes & Noble posted losses. Wendy’s and Domino’s had higher profits. The U.S. economy grew at an annual rate of 0.1 percent in the last three months of 2012, better than the original estimate of a 0.1-percent decline, but hardly robust. The number of Americans seeking unemployment aid fell, and the government prepared for federal spending cuts to kick in Friday, a result of Democrats and Republicans not compromising on the budget debate.

“We still have work to do, still a lot of headwinds to face,” said Steve Sachs, head of capital markets at ProShares in Bethesda, Md. But, he added, “we’re in a better position now than we were three years ago.”

Thursday’s close means the Dow rose 1.4 percent in February — respectable, but a slowdown from its 5.8-percent gain in January.

The Dow milestone doesn’t mean much in practical terms. It’s an index of 30 big-name stocks, such as Disney and General Electric, that investors follow as a gauge of how the overall stock market is doing. But professional investors don’t change their strategy because of it.

Even so, a Dow record would be important for psychological reasons. It can make people feel like the economy is doing better. That can induce them to spend and invest more. And it reminds people of a time before the financial crisis, which peaked in 2008.

The yield on the 10-year Treasury note held steady at about 1.90 percent.