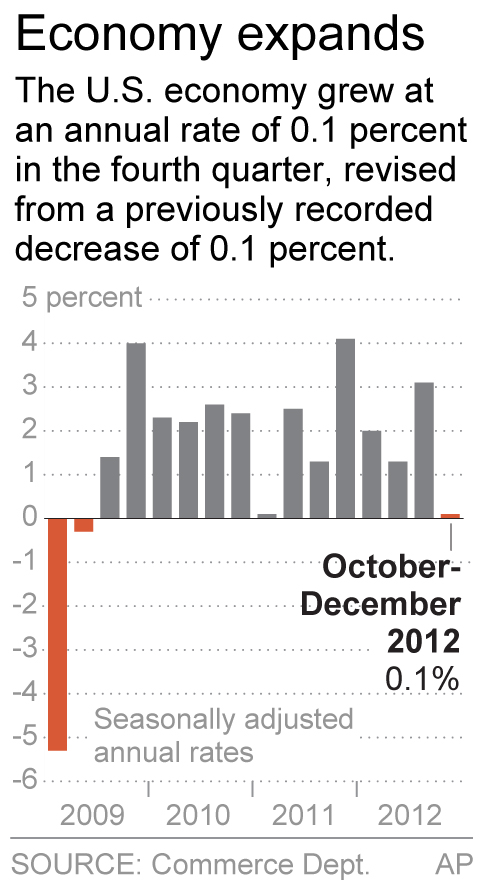 WASHINGTON (AP) – The weakest quarter for the U.S. economy in nearly two years may end up being a temporary lull. Economists think growth has begun to pick up on the strength of a sustained housing recovery and a better job market.

The economy grew at an annual rate of just 0.1 percent from October to December, a government report Thursday showed. That’s only slightly better than the Commerce Department’s previous estimate that the economy shrank at a rate of 0.1 percent. And it’s down from the 3.1-percent annual growth rate in the July-September quarter.

Shares of J.C. Penney Co. plunged 17 percent on Thursday, the biggest loser on the Standard & Poor’s 500 index for most of the day. The drop comes a day after the department-store chain reported its fourth consecutive larger-than-expected quarterly loss on another steep sales decline.

The drop means that Penney shares, which are now trading under $18, have lost nearly 60 percent of their value since January of last year, when CEO Ron Johnson announced his plan to ditch hundreds of sales in favor of “everyday low prices.”

NEW YORK (AP) – Sears narrowed its fiscal fourth-quarter loss as it reduced expenses and improved sales a little at its namesake stores. The results offer a glimmer of hope for a troubled department store chain that still has a long way to go to turn around its Sears and Kmart stores.

The report follows an announcement last month by Sears Holdings Corp. that its chairman and hedge-fund billionaire Edward Lampert would take over as CEO. Investors are concerned about whether Lampert will continue to invest in improving the shopping experience at stores.

In his annual letter to investors, Lampert sought to ease worries on Wall Street by promising that the company will continue to invest in technology, bolster its online operations, and make other changes to shore up its business.

Freddie says it paid a dividend of $1.8 billion to the U.S. Treasury and requested no additional federal aid.

The fourth-quarter results compared with net income of $619 million in the same quarter of 2011.

KOKOMO, Ind. (AP) – Chrysler is investing millions in the Kokomo, Ind., area as it shifts most of its vehicles to new transmissions that save fuel and better suit the driving habits of Americans.

The automaker will invest nearly $400 million at four plants, adding 1,250 jobs to what it says is the largest transmission factory complex in the world. The plants will make fuel-efficient eight- and nine-speed automatic transmissions.

Chrysler plans to use the new nine-speed transmission in key front-wheel-drive vehicles such as the Dodge Dart compact, which has lagged behind sales expectations. The transmission will also go into a new Chrysler 200 midsize sedan early next year and the Jeep Cherokee midsize SUV, which will replace the aging Jeep Liberty in the summer.