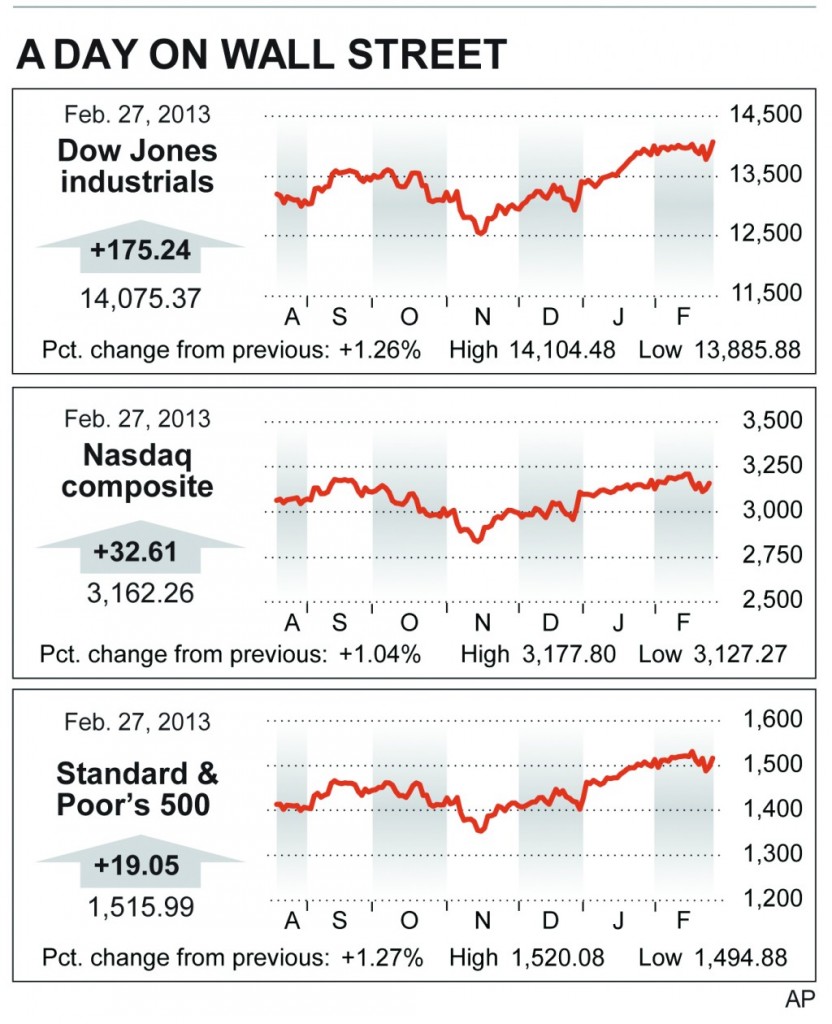 The Dow came within 100 points of its all-time high Wednesday after rising sharply for a second straight day.

The market surged following more evidence that the Fed will keep interest rates low, housing will keep recovering and shoppers aren’t pulling back on spending, even with a payroll tax hike.

The gains were broad: Twenty-nine of 30 stocks in the Dow Jones industrial average rose. All 10 industries in the Standard and Poor’s 500 index climbed.

The Dow has surged 290 points in the past two days, erasing its drop of 216 points Monday when inconclusive results from an election in Italy renewed worries that Europe’s fiscal crisis could flare up again.

Stocks have surged since the start of the year. The Dow is up 7.4 percent.

Earnings for S&P 500 companies will climb 7.8 percent in the fourth quarter, the third straight quarter of growth, according to data from S&P Capital IQ.

Investors were also encouraged Wednesday that Federal Reserve Chairman Ben Bernanke stood behind the central bank’s low-interest-rate policies as he faced lawmakers for a second day. His comments dissipated worries about the bank’s resolve to keep up the program. Those worries sprung up last week when minutes from the bank’s last policy meeting revealed disagreement among Fed officials.

Also, the number of Americans who signed contracts to buy homes rose in January from December to the highest level in almost three years. The report continued a string of positive housing news. Sales of new homes jumped 16 percent last month to the highest level since July 2008, the government reported Tuesday.

Home builder stocks rose for the second day in a row. PulteGroup climbed 25 cents, or 1.3 percent, to $19.30, after rising 5.7 percent the day before. The government reported Tuesday that sales of new homes jumped 16 percent last month.

The yield on the 10-year Treasury note rose two basis points to 1.90 percent.

– First Solar plunged $4.32, or 13.8 percent, to $27.04 after the company posted disappointing sales for the fourth quarter and gave a weak early outlook for the year.

– Target fell 93 cents, or 1.5 percent, to $63.12 after the No. 2 discount chain’s quarterly income fell 2 percent as it dealt with intense competition during the year-end  shopping season.