Community Reb Yosef Friedenson, z”l The Strongest Link to the World That Was
Community

As I pondered whether to hire one of the guides that were available to tourists, I was absolutely taken by surprise at seeing Mr. Yosef Friedenson and his wife. I could not believe my luck at this coincidence, for who could be a better guide than the legendary Mr. Friedenson and his wife, who had spent time at Auschwitz? As a historian, he could probably give me the best tour of the infamous camp. Reb Yossel was a part of my family history, having spent several years with my father in the concentration camps, and, after their liberation, at Bergen-Belsen and Feldafing. Thanks to Reb Yossel, I learned in detail about my father’s role as the Chief Rabbi of Hanover, and, even more fascinating, his spiritual heroism in the camps. Mr. Friedenson often repeated the story of how he and other Chassidic inmates would follow my father pushing the wheelbarrow as he learned entire masechtos b’al peh. He was only too happy to have me tag along.

But here were Reb Yossel and his wife pointing to every barrack, recalling who was where and recounting his experiences at Auschwitz. “You see here, Menachem, look on top of the wooden bunk beds and you will see messages and even art by the inmates and you can’t imagine how pressed together we were.” But remarkably, what seemed to fascinate Reb Yossel the most was the clear air. With my video camera rolling, Reb Yossel took a deep breath and said: “All I smelled was the burning bodies, so different from the clear air,” and then he stopped and with a great deal of emotion added: “And this green that covers the railroad tracks, how I dreamed about ever seeing green again.”

Frankly, I found it difficult to comprehend how the Friedensons could have returned, but I knew that in Reb Yossel’s case, he was bent on transmitting his experiences to future generations, as he often did in his appearances. Yet, I could detect their unease and even torment at somehow reliving that indescribable, painful chapter in their lives.

A close family friend of the Lubinskys and the Zweigenhafts (my uncle Reb Shlomo Zev, z”l, and my aunt Frieda, a”h), it was Reb Yossel who presented me with my first real experience in Agudas Yisrael. He gave me tickets to all the sessions of the Knessiah Gedolah in 1964. To this day, I recall how the sight of the mizrach of the greatest Gedolei Yisrael of that era affected me. Of course, I grew up with Dos Yiddishe Vort, which he so brilliantly edited for 430 issues. I would watch my father read the periodical from cover to cover; my father considered it his link to the past. While in Yerushalayim, I marveled at how Reb Yossel quickly transformed into a fervent chassid of the saintly Bais Yisrael. Perhaps it was these transformations of victim, father, husband, grandfather, historian, Agudas Yisrael spokesman, community leader, chassid, friend, eyewitness to history, speaker and simply mentch that was most fascinating about Mr. Friedenson, a title he preferred and proudly carried. It was his outward pashtus that was so deceiving for a man who was so talented and such a mushlam.

It was during my tenure of working in Agudas Yisrael that I got to see yet another astonishing side of Reb Yossel. As a writer, he was as articulate and eloquent as anyone, bringing to life the departed Gedolim he wrote about and the towns and cities of yesteryear that he so vividly described. His penchant for historical accuracy was second to none. He spared no efforts to pursue facts, often comparing sources to assure factual perfection.

He was, of course, in a class of his own in his knowledge of unadulterated Yiddish, often lamenting how some modern-day Yiddish writers had managed to completely distort the language that had survived the long galus. Reb Yossel was a true linguist. He would say in jest that his near perfect English was due to his three daughters, but he was equally as proficient in German, often reciting long diatribes that he had held with SS officers in the camps.

It was fascinating to watch Reb Yossel interact with what we on the staff of Agudas Yisrael in the ’70s and ’80s had come to view as the troika. Remarkably, the three included Rabbi Moshe Sherer, the American-born Agudist who had transformed the movement into a broad-based national grassroots organization of Torah Jews, Rabbi Boruch Borchardt, the “Yekkeh” who had totally absorbed the teachings of Rosenheim and had become the loyal American Agudah leader who was in many respects the engine that drove the organization, and then there was Reb Yossel from Lodz, the she’eiris hapleitah firebrand who simply had Agudas Yisrael in his veins as he did the rich past of Polish Jewry.

Reb Yossel was indeed the link to the she’eiris hapleitah and it was due to his efforts that these Jews became the backbone of the resurgence of Agudah in America. How could a she’eiris hapleitah Jew not go to an Agudah convention if Reb Yossel called? Rabbi Sherer fully appreciated him, often consulting with him on extremely sensitive matters and designating him as liaison to the Chassidic community. Rabbi Sherer’s monthly “Fun Chodesh tzu Chodesh” page opened every issue of Dos Yiddishe Vort. It is hard to imagine the success of post-War Agudah without Reb Yossel being such an integral part of the leadership.

As much as Agudah was his raison d’être, he was well respected in all Jewish circles, including by some of the more secular Jewish leaders. It was Friedenson who urged the Moetzes Gedolei HaTorah to allow Agudah to join a newly formed Jewish Community Relations Council of New York, despite its having Reform and Conservative representatives, because he saw an analogy to the kehillos of pre-War Europe that included representatives from other “streams.” But once the Moetzes Gedolei HaTorah agreed only to accept observer status, Reb Yossel was totally subservient to their wishes. It was his bitter experiences in the Churban that made him often seem liberal in his views, certainly in comparison to other Torah leaders, but in reality it was his way to go to great lengths to avoid machlokes at any cost. He certainly sought to avoid any Jewish bloodshed when it came to his views on Eretz Yisrael.

Perhaps few appreciated Reb Yossel’s multiple talents better than Reb Yechiel Ben Zion Fishoff, who wrote many articles for Dos Yiddishe Vort, including his remarkable experiences of wandering through Europe as an orphan. Mr. Fishoff lamented about Mr. Friedenson’s passing: “Who is going to be able to look back at our past the way Reb Yossel did?” He praised Dos Yiddishe Vort for so beautifully capturing “the period of Jewish life that so few could describe.”

Reb Yossel’s wealth of knowledge certainly came in handy as the Agudas Yisrael recently celebrated its 100th anniversary. He had already published an English book on the founding of Agudas Yisrael nearly 40 years ago. He was indeed the major resource for the celebrations that took place this year and attended the special celebration at the recent Agudas Yisrael convention. As chairman, I had the zechus to welcome him and to make note that his special edition on the 100th Anniversary of Agudas Yisrael was being distributed. This was to be his last appearance at a large Agudah gathering and the special issue of Dos Yiddishe Vort, the 430th, his last. What a fitting tribute to a legend! 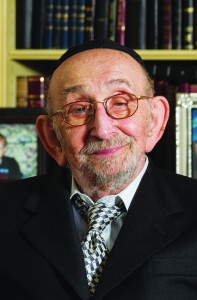