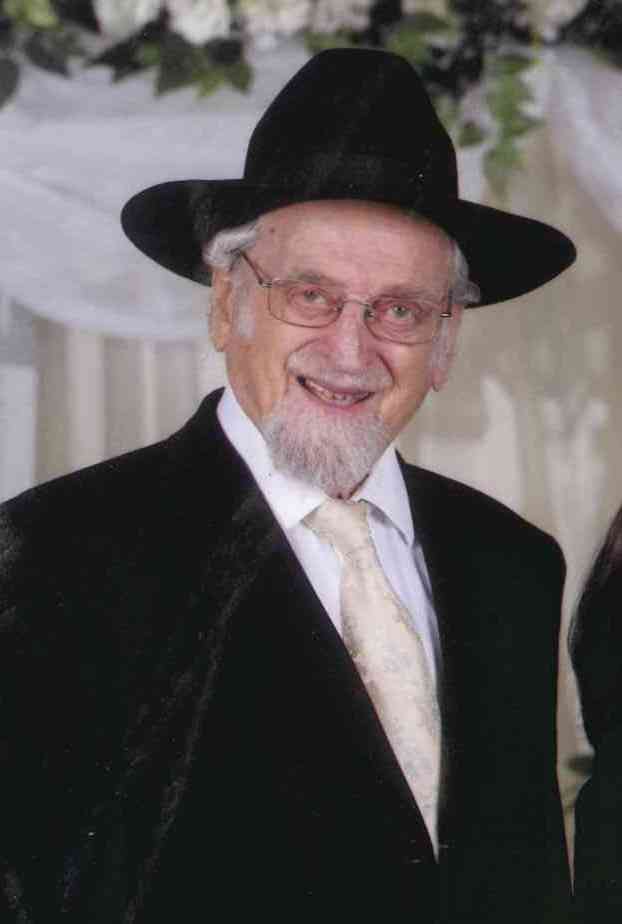 Rabbi Mayer Birnbaum, whose dramatic life story growing up as a Jewish kid in East New York, getting drafted into Patton’s army, liberating several concentration camps and helping the scattered survivors rebuild their lives was forever immortalized in his autobiography Lieutenant Birnbaum, was niftar early Friday morning. He was 94.

From the inspiration the American teenager received from legendary Agudah leader Mike Tress to his introduction to anti-Semitism upon his induction in the army; from the stirring two-hour Kol Nidrei drashah by the Klausenburger Rebbe in Feldafing DP camp to the living room of Harav Velvel Cheshin, a mekubal from Yerushalayim, and Harav Beinish Finkel, the Rosh Yeshivah of Mir — Lt. Birnbaum’s life enthused two generations of seminary students and readers of Yonasan Rosenblum’s book Lieutenant Birnbaum: A Soldier’s Story: Growing Up Jewish in America, Liberating the DP Camps, and a New Home in Jerusalem, published by ArtScroll/Mesorah Publications.

“He was a most pleasant person to be around; babies loved him,” the family member said. “Every person of any age loved him and felt loved by him.”

Reb Beinish in particular made an indelible impression on Reb Mayer, whose life in retirement was surrounded by the Rosh Yeshivah’s memory.

“Every time I speak — it’s probably already 100 to 150 times that I spoke at Bais Yaakovs, yeshivos and shuls … I always make a point to mention Reb Beinish, because he was such an inspiration to me,” Reb Mayer said in an interview with Hamodia three years ago.

“From where I was and where I am now, compared to 20 to 30 years ago, he changed my life around,” he added.

Reb Mayer’s life as a U.S. soldier combined with his fame as the driver of the “van to the Kosel” at his levayah.

“You’re going up to Shamayim,” Harav Yitzchak Ezrachi, a Rosh Yeshivah in the Mir and a neighbor of the Birnbaums, said in his hesped. “All the people that you welcomed into your car with a smile will meet you in Shamayim and welcome you. What we need now is a soldier like you to fight with your smile for rachamim.”

Born in 1919 in New Lots, an East New York neighborhood of hardscrabble African-American families living side by side with poor Jewish families such as the Birnbaums who couldn’t afford electricity or toilet paper, Mayer grew up with the Young Israel of New Lots as a second home. It hosted the Shabbos program which he attended each week and the group received frequent visits from Mike Tress.

Many years later, Reb Mayer was honored as the longest dues-paying member of any Young Israel shul.

Dec. 7, 1941 was a national day of infamy, but for the 22-year-old Mayer — then known as Mike — Birnbaum, it was a personal day of consequence as well. His first response upon hearing that Pearl Harbor had been attacked was, “I don’t know her.” But by the time he got his induction letter a few days later, he followed the advice of Harav Yitzchok Hutner, zt”l, his Rosh Yeshivah in Chaim Berlin, and enlisted.

Before he left for the army, Rabbi Shmuel Schechter, his rebbi, reviewed with him the halachos pertaining to the army, and then gave him his modus operandi.

“Millions of eyes are watching you; all their hopes are pinned on you,” Rabbi Schechter said. “You know that you can’t disappoint such a cheering squad; you’ve got to hit a home run.”

That cheerleading proved critical for Mayer, who on his very first day was confronted with a dinner of baked ham, and an early morning awakening that precluded putting on tefillin. As he recounts in the book, he survived on a diet of bread and vegetables, and his willingness to sustain ridicule for his beliefs and mitzvos convinced his commanding officer to allow him use of his office to daven.

Mayer’s induction into active service started with storming the Normandy beach on D-Day 1944, and ended with a near Allied defeat in the Battle of the Bulge. But the Allies regrouped and were soon pounding on Germany’s door with punishing airstrikes. Mayer, who by then had been promoted to lieutenant with a personal aide, wrote that these years convinced him more than anything else of hashgachah pratis.

“Never again would I have such a clear sense of my life resting in the Yad Hashem at every moment,” he wrote. “… After being released from the army, I frequently heard other ex-GI’s bemoaning the four years they ‘lost’ in the army. But I never felt that way.”

In April of 1945, Lt. Birnbaum received orders that changed his life. He was sent to the Ohrdorff concentration camp, a place he naively thought “to be giant work camps employing slave labor — three meals a day and a bed at night in exchange for unpaid labor.”

At Ohrdorff, Lt. Birnbaum saw firsthand the unspeakable crimes committed by the Nazis. Bodies were strewn about, still oozing blood, and Nazi war criminals were allowed to roam around their former prisoners with little worry of punishment.

In a concurrence marveled at by members of the Birnbaum family, Lt. Birnbaum was called to administer the last rites to a young Polish Jew from Lodz who was on the verge of death. Not knowing what to do, Mayer started saying Shema with the boy, who said his name was Yosef.

“Why are you saying Shema with me?” the young man asked, a smile playing on his lips.

Fortunately, this “Yosef,” later known as the legendary Reb Yossel Friedenson, survived — and was niftar this past Shabbos, a day after Lt. Birnbaum. Lt. Birnbaum frequently retold this story as a tale of Jewish survival and bitachon.

Eventually, Lt. Birnbaum realized that survivors just wanted people to listen to their stories. He sat with them for hours hearing their stories of tragedy and heroism, of betrayal and abandonment.

“I began,” Lt. Birnbaum wrote, “To fully appreciate for the first time the heroism of those who emerged with their faith intact and who had the courage to pick up the broken shards of their lives and begin anew — marrying again, raising children, and sending those children to yeshivos and Bais Yaakovs.”

His days in the Feldafing DP camp were ones he said, “I wouldn’t trade for anything.” There was the Klausenburger Rebbe, the “dominant figure” in the camp; the Stoliner Rebbe, who attempted to hide his identity as long as possible; and the Krasne Rav, Harav Hillel Lichtenstein, whom Lt. Birnbaum helped obtain a shipment of religious articles to rebuild Jewish life in the camp.

Lt. Birnbaum’s post-army life provided a story on its own. Dressed in his uniform, with a chestful of medals adorning his shirt, he would go fundraising with Mike Tress for affidavits to allow she’eiris hapleitah Yidden to immigrate to the United States. After several months, he took up gunrunning for the young Jewish revolutionaries fighting the British-imposed blockade on Palestine.

Together with a partner, Rabbi Birnbaum in 1953 founded Mauzone, the first kosher takeout store in New York. It lasted until his aliyah in 1981.

When he and his wife moved to Eretz Yisrael, he made the acquaintance of Harav Binyomin Zev Cheshin, z”l, a mekubal from Yerushalayim. Responding to Harav Cheshin’s challenge to start davening vasikin every morning, Rabbi Birnbaum started his famous “van to the Kosel,” which picked up Harav Beinish Finkel, among other Gedolim, on its way.

In an interview with Hamodia three years ago, Reb Meyer said that, although 20 years had passed since the petirah of the Mirrer Rosh Yeshivah, his name is still firmly attached to the minyan in which he davened every morning, which still attracts more than 30 people on any given day.

In fact, several people have confirmed, for the past 20 years it was known as “Mayer Birnbaum’s minyan.”

Reb Meyer recalled several hanhagos that Reb Beinish had, such as going from minyan to minyan to “collect” Birkas Kohanim from each of the many colorful minyanim going on and that Reb Beinish would always be waiting at his house already wearing tallis and tefillin.

The relationship Reb Meyer had with Reb Beinish was a surprisingly close one.

“You have no idea how close we were, unbelievable,” he told Hamodia in the interview. “He flattered me all over the world.”

When his 12th child was born, Reb Meyer told his wife that he wanted to select a name in honor of Reb Beinish, although he was still alive.

Reb Meyer’s predawn car ride to the Kosel for the vasikin minyan, and the legend it has become among young yeshivah bachurim learning in the Mir, is chronicled in Rabbi Rosenblum’s book. People have attributed their shidduchim to it and many have tried to attend the minyan at least once in the course of their trip to Eretz Yisrael.

Until recently, Reb Meyer still went to the Kosel every day, but he stopped driving about five years ago.

Reb Mayer’s move to Eretz Yisrael heralded his retirement from the business world. He then learned for many years in Yeshivah Ohr Somayach. His tefillos were followed by a long, ever-growing list of people who needed yeshuos, whether it was the sick, those in need of a shidduch, or childless couples.

“He didn’t know them personally,” a daughter-in-law said, “but he got to know them when he davened for them every day.”

Reb Mayer had a vitality and lucidity that belied his 94 years. But two weeks ago he was hospitalized in Shaare Zedek Medical Center and was placed under sedation. He was niftar late Thursday night surrounded by his family.

Maspidim at the levayah the next day included Harav Tzvi Cheshin, the son of Reb Mayer’s mentor; Harav Yitzchok Ezrachi, a neighbor and Rosh Yeshivah of the Mir; Harav Don Segal; and his son Akivah. Kevurah was on Har Hazeisim.

Reb Mayer is survived, ybl”c, by his wife Goldie and sixteen children, plus dozens of grandchildren and great-grandchildren.