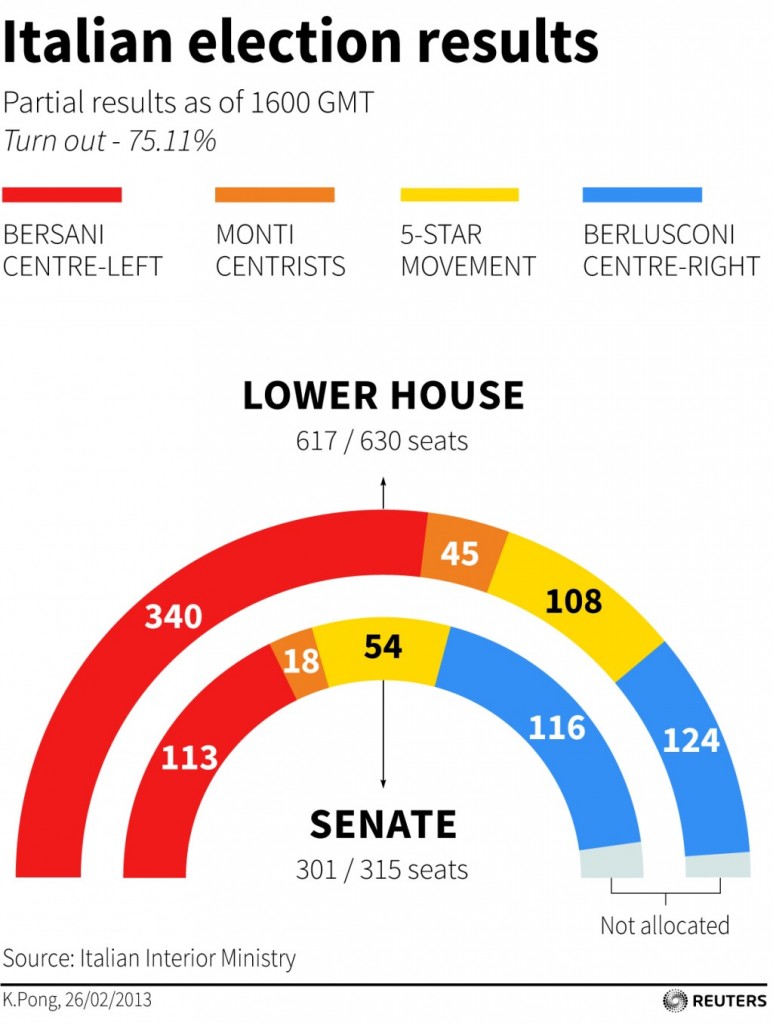 Italy’s stunned political parties searched for a way forward on Tuesday after an inconclusive election gave none of them a parliamentary majority and threatened prolonged instability and a renewal of the European financial crisis.

The results, notably the dramatic surge of the anti-establishment 5-Star Movement of comic Beppe Grillo, left the center-left bloc with a majority in the lower house but without the numbers to control the upper chamber, the Senate.

Financial markets fell sharply at the prospect of a stalemate that reawakened memories of the crisis that pushed Italy’s borrowing costs toward unsustainably high levels and brought the euro zone to the brink of collapse in 2011.

“The winner is: Ingovernability,” ran the headline in Rome newspaper Il Messaggero, reflecting the deadlock the country will have to confront in the next few weeks as sworn enemies are forced to work together to form a government.

Ratings agency Standard & Poor’s said on Tuesday that policy choices of the next Italian government would be crucial for the country’s creditworthiness, underlining the need for a coalition that can agree on new reforms.

Pier Luigi Bersani, head of the center-left Democratic Party (PD), has the difficult task of trying to agree to a “grand coalition” with former prime minister Silvio Berlusconi, the man he blames for ruining Italy, or striking a deal with Grillo, a completely unknown quantity in conventional politics.

The alternative is new elections either immediately or within a few months, although both Berlusconi and Bersani have indicated that they want to avoid a return to the polls if possible: “Italy cannot be ungoverned and we have to reflect,” Berlusconi said in an interview on his own media station.

For his part, Grillo, whose movement won the most votes of any single party, has indicated that he believes the next government will last no more than six months.

The election, a massive rejection of the austerity policies applied by Prime Minister Mario Monti with the backing of international leaders from U.S. President Barack Obama to German Chancellor Angela Merkel, caused consternation across Europe.

“This is a jump to nowhere that does not bode well either for Italy or Europe,” he said.

A long recession and growing disillusionment with mainstream parties and tax-raising austerity fed a bitter public mood and contributed to the massive rejection of Monti, whose centrist coalition was relegated to the sidelines.

Projections by the Italian Center for Electoral Studies showed that the center-left will have 121 seats in the Senate, against 117 for the center-right alliance of Berlusconi’s PDL and the regionalist Northern League. Grillo would take 54.

That leaves no party with the majority in a chamber which a government must control to pass legislation.