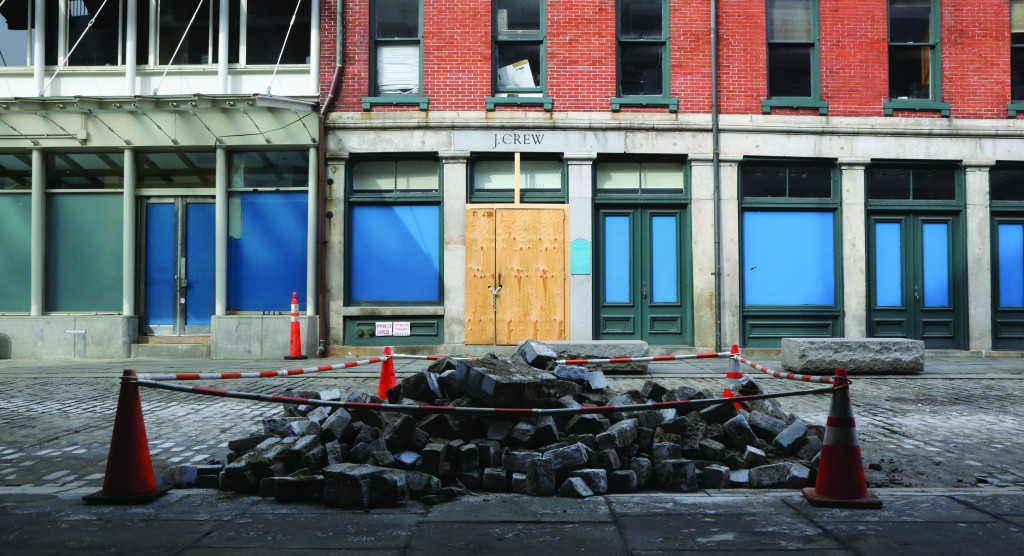 The historic cobblestone streets and 19th-century mercantile buildings near the water’s edge in lower Manhattan are eerily deserted, a neighborhood silenced by Superstorm Sandy.

Just blocks from the tall-masted ships that rise above South Street Seaport, the windows of narrow brick apartment buildings are still crisscrossed with masking tape left by their owners before the storm. Store interiors are stripped down to plywood and wiring. Restaurants are chained shut, frozen in time, saddled with electrical systems that were ruined by several feet of salt water that raced up from the East River and through their front doors.

“People have no clue that this corner of Manhattan has been hit so badly,” said Adam Weprin, manager of the Bridge Cafe, one of the city’s oldest bars that sits on a quiet street near the seaport. “Right now, it’s a ghost town and a construction site.”

Nearly four months after the storm, roughly 85 percent of small businesses near the South Street Seaport are still boarded up. It could be months before some reopen, while others may never return. On Fulton Street, the wide tourist-friendly pedestrian walkway that comprises the seaport’s main shopping district, not a single one of the major chain stores — which include Coach, Ann Taylor and Brookstone — has reopened.

Among local business owners, there is a pervasive sense that their plight has been ignored by the rest of the city. A state senator who represents the area estimates at least 1,000 jobs were lost in lower Manhattan — 450 of them in the seaport neighborhood alone.

From its red wood-frame building in the shadow of the Brooklyn Bridge, the Bridge Cafe has dealt with its share of changes over the last two centuries. It has endured economic slumps, nor’easters and the Sept. 11 terrorist attacks. But after the basement was flooded to the rafters and water destroyed the building’s wood foundation, Weprin faced the prospect of shutting its doors for good.

“The neighborhood’s been beaten,” Weprin said. “You walk around here and it’s like Chernobyl. At night, it’s vacated.”

The future of the South Street Seaport is equally uncertain. Howard Hughes Corp, which controls the former 19th-century counting houses that are home to the retail chains, said it does not yet know which — if any — of the major retailers will come back. The hope is to have Fulton Street in working order again before Memorial Day, when the summer season kicks off and the seaport will desperately need an influx of visitors.

But in a case of unfortunate timing, Pier 17, the shopping mall housed inside a rustic wooden building on the pier, is slated to close for a long-planned renovation in June that will transform it into a modern glass-walled structure with a rooftop plaza. The impending renovation has only added to the misery of shop owners who lost so much revenue since the storm and haven’t recouped their losses.