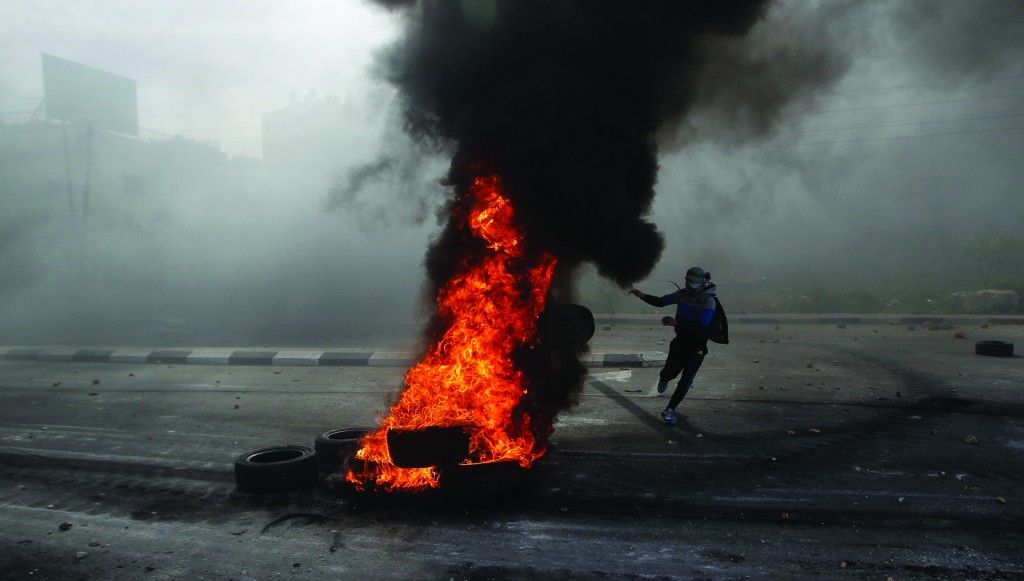 A Palestinian arrested for throwing rocks at Israeli cars in Yehudah and Shomron who later died in police custody was given a martyr’s funeral near Chevron on Monday as Israeli security forces stood on high alert.

There were dozens of stone-throwing incidents, along with IDF troops responding with tear gas and stun grenades, as the threat of a third intifada hung over the country.

A five-year-old Israeli boy was lightly injured by stones thrown at him on the road adjacent to Beitar Illit in on Monday night. He sustained a head injury and was evacuated by ambulance to a hospital.

A 13-year-old Palestinian was reported seriously hurt by IDF rubber bullets during confrontations with security forces near Beit Lechem.

A 16-year-old Palestinian who tried with others to set fire to the guard tower by Kever Rochel was shot in the head with a rubber bullet. He was treated by an IDF doctor before being transferred to Hadassah Ein-Kerem hospital.

Thousands attended the funeral of Arafat Jaradat, 30, in his home town of Saeer, just north of Chevron where he was given “military honors,” including a 21-gun salute. His death added to tensions already raised by a hunger strike by four other Palestinian inmates, although Jaradat was an obscure rioter, not affiliated with any Palestinian organization.

Stores in the Arab section of Chevron were shuttered and stone-throwers in Chevron also threw detonators and firecrackers at IDF soldiers.

The IDF “showed supreme restraint,” according to Haaretz, which is frequently critical of the military. “The forces in the field were under the command of an officer who organized a small group of sharpshooters and personally approved every single rubber bullet filed at the main rioters.”

Although there were masked gunmen at the funeral, armed men have not otherwise been seen in the streets, Haaretz reported.

Palestinians have blamed Israeli security personnel for Jaradat’s death, but an autopsy on Sunday found no clear sign of physical abuse and the cause of death remained undetermined.

Palestinian Authority President Mahmoud Abbas said he will not allow a third armed intifada, while at the same time accusing the Israelis of fomenting violence.

“The Israelis want chaos … We will not allow them to drag us into it and to mess with the lives of our children and our youth,” Abbas told reporters in his office in Ramallah.

Israeli officials confided to The Jerusalem Post that they were hopeful Abbas’s comment was meant to signal a winding down of the violence. But Netanyahu spokesman Mark Regev threw the allegation back at Abbas, saying that Palestinian officials have called for more solidarity rallies for the prisoners, which are sure to lead to further violent confrontations.

Homefront Minister Avi Dichter said Israel had to handle protests carefully, explaining that the Palestinians are trying to portray themselves as victims ahead of President Barack Obama’s visit to the region next month.

“I don’t think the Palestinian Authority will gain from an intifada, just as it didn’t achieve anything from the first or second intifadas,” he said.

“But I would say that, after conducting themselves with poor and warped thinking over the years, they don’t always recognize what’s in their best interests.”

Israel demanded on Sunday that the Palestinian Authority rein in the protests.

“They [the Palestinians] are trying to drag us into a situation where there will be dead children,” Dichter said, indicating that that would ignite another violent uprising, or intifada.

In a press release, Egyptian Foreign Minister Mohammed Amr warned that Israeli policies could lead to an explosion in the region.