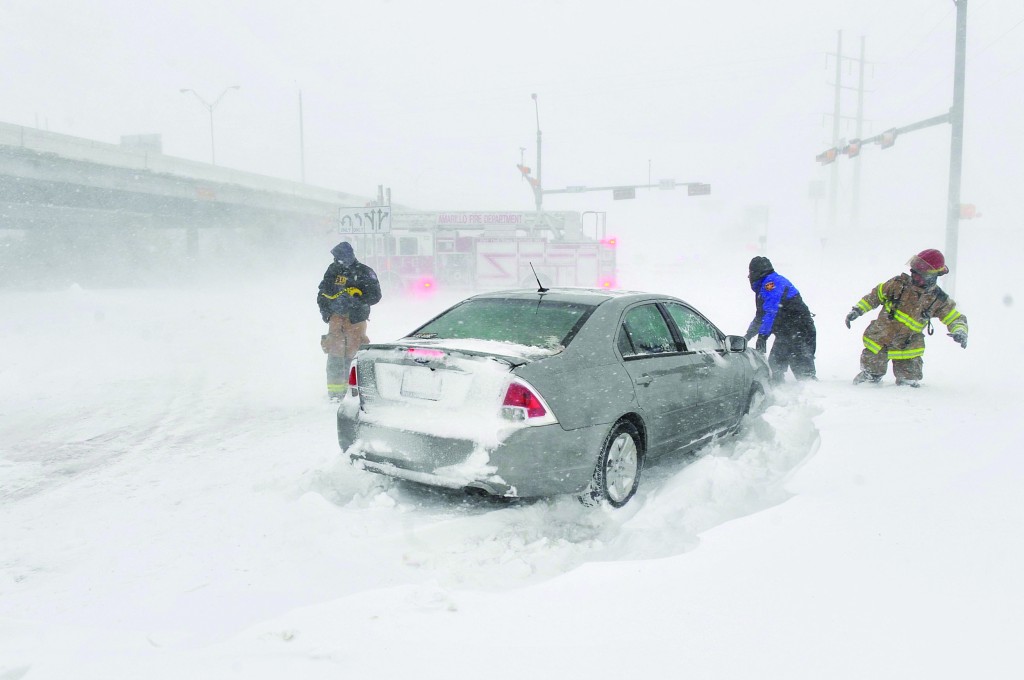 Blizzard conditions again descended on the midsection of the country Monday, bringing hurricane-force winds to the Texas Panhandle, closing highways in Texas and Oklahoma and putting already snow-covered parts of Kansas on high alert as the day progressed.

National Weather Service officials issued blizzard warnings and watches in Kansas and Oklahoma through late Monday. As the storm tracks north and east across West Texas toward Oklahoma, Arkansas, Kansas, and Missouri.

A strong low pressure system is feeding the wintry beast, Greg Carbin, a meteorologist at the Storm Prediction Center in Norman, Okla., said.

“The more intense the low, the stronger the storm as far as pulling air in,” he said. “That’s what gives us the high winds.”

But because not all of the region’s temperatures were below freezing, heavy rain and thunderstorms pelted eastern Oklahoma and Texas. National Weather Service meteorologist Victor Murphy said the system is moving east at 25 mph.

Parts of Colorado and New Mexico were left to dig out from the storm after it passed through Sunday. Up to 10 inches fell in parts of New Mexico, and the foothills west of Denver saw up to two feet of snow.

The moisture should help improve Denver athletic fields, which have been temporarily closed to protect the drought-damaged grass. It allowed the U.S. Forest Service to burn brush in northern Colorado to try to prevent future wildfires.

Colorado isn’t the only state in the storm’s way thirsting for moisture.

“Is it a drought buster? Absolutely not,” Murphy said. “Will it bring short-term improvement? Yes.” Climatologists say 12 inches of snow is equivalent to about 1 inch of rain, depending on the density of the snow.

Amarillo could set a record for daily snowfall, Murphy said. The NWS in Amarillo said Monday afternoon the city had received about 16.9 inches. The daily record is 19.3 inches set in March 1934.

Oklahoma also was under a blizzard warning, and officials warned that travel would be especially dangerous through Tuesday morning in the Panhandle and counties along the Kansas border. Forecasters said up to 16 inches of snow could accumulate in some areas, with wind gusts reaching up to 55 mph.

Oklahoma Lt. Gov. Todd Lamb has declared a state of emergency for 56 Oklahoma counties, and the Oklahoma Highway Patrol closed all highways in the state’s Panhandle, citing slick roads and limited visibility.

Parts of Kansas are bracing for anywhere from 8 to 24 inches of snow, including the city of Wichita, where residents had barely recovered from last week’s storm that dumped up to 18 inches.