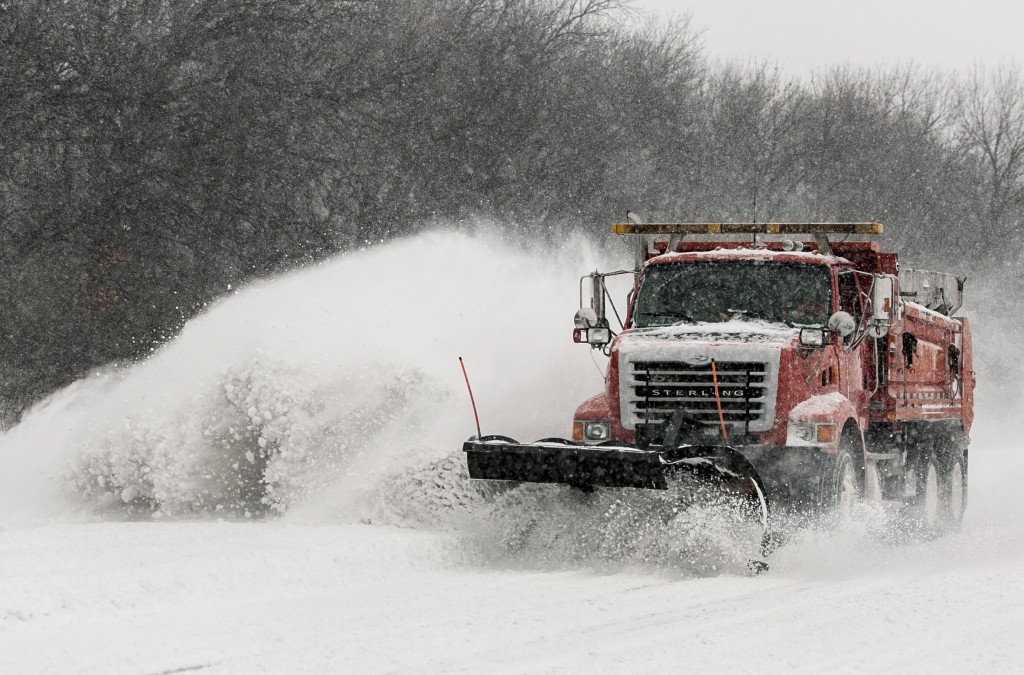 Blinding snow, at times accompanied by thunder and lightning, bombarded much of the nation’s midsection Thursday, causing whiteout conditions, shutting down large swaths of interstate highways and forcing schools, businesses and even state legislatures to close.

Kansas was the epicenter of the winter storm, with parts of the state buried under 14 inches of powdery snow, but winter storm warnings stretched from eastern Colorado through Illinois. Freezing rain and sleet were forecast for southern Missouri, southern Illinois and Arkansas. St. Louis received all of the above — a treacherous mix of snow, sleet and freezing rain.

Several accidents were blamed on icy and slushy roadways, including two fatal accidents. Most schools in Kansas and Missouri, and many in neighboring states, were closed. Legislatures shut down in Kansas, Missouri, Arkansas, Nebraska and Iowa.

“Instead of pouring rain, it’s pouring snow,” Truett said. And pouring was a sound description, with snow falling at a rate of 2 inches per hour or more in some spots.

Topeka got 3 inches of snow in one 30-minute period, leaving medical center worker Jennifer Carlock to dread the drive home.

“It came on fast,” Carlock said as she shoveled around her car. “We’re going to test out traction control on the way home.”

Snow totals passed the foot mark in many places: Monarch Pass, Colo., had 17 1/2 inches, Hutchinson, Kan., 14 inches and Wichita, Kan., 13 inches. A few places in far northern Oklahoma saw between 10 to 13 1/2 inches of snow. The National Weather Service said up to 18 inches of snow were possible in central Kansas.

Near Edwardsville, Ill., farmer Mike Campbell called the snow – or any precipitation – a blessing after a bone-dry growing season in 2012. He hopes it is a good omen for the spring.

In Colorado, the U.S. Forest Service planned to take advantage of the snow to burn piles of dead trees on federal land.