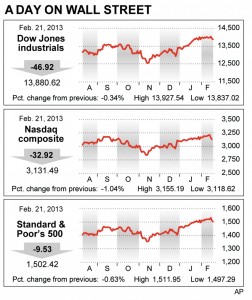 U.S. stocks continued a two-day slide Thursday on weak economic data and concern about the Federal Reserve’s resolve to keep juicing the economy.

In Europe, markets closed sharply lower after a monthly survey of European executives showed that business activity in the European Union slowed in February, a strong signal that a downturn that began last year will continue into 2013. Benchmark indexes lost 2.3 percent in France, 1.9 percent in Germany, and 1.6 percent in Britain.

U.S. indexes have soared this year to the highest levels since the financial crisis but may be ready to fall back to earth, said Kim Caughey Forrest, senior analyst with Fort Pitt Capital Group in Pittsburgh.

“I think the market has gotten ahead of itself,” she said. She said fourth-quarter earnings have generally met expectations, but only after those expectations were reduced because companies made dire projections in November and December.

Wal-Mart Stores rose after beating analysts’ profit forecasts in the fourth quarter. However, the biggest retailer warned of a slow start to the year. It gained $1.05, or 1.5 percent, to $70.26.

After a strong start to the year-end season, Wal-Mart said, the first three weeks of December were weak, and business has been volatile since then. The company attributed some of the weakness to a delay in tax refund checks that have left people strapped for cash. Wal-Mart’s customers also have less money to spend because a temporary payroll tax cut expired in December.

“Everybody’s gotten a 2-percent pay cut, and people who file their taxes early are not getting a refund back in a timely manner,” Forrest said.

Supermarket chain Safeway was the biggest gainer in the S&P 500, rising $2.84, or 14.1 percent, to $22.97 after saying its net income jumped 13 percent in the fourth quarter, helped by higher gift and prepaid card revenue.

Electric car company Tesla Motors plunged a day after reporting that its fourth-quarter net loss grew 10 percent on costs related to production of its new Model S. The stock fell $3.38, or 8.8 percent, to $35.16.

Earlier, Asian stocks had closed sharply lower. The sell-off began Wednesday afternoon in New York after the release of minutes from the Fed’s latest meeting. The meeting notes showed some policymakers want to wind down bond purchases and other measures to boost the economy.

The minutes revealed new divisions over the Fed’s low-interest rate policies. There is no sign of inflation, yet there was more evidence that some Fed officials are ready to ease off the stimulus programs before the economy has fully recovered.

The Fed’s bond-buying has been boosting markets by reducing the cost of borrowing for companies and investors, Forrest explained. When interest rates are lower, it’s possible to do business cheaper even if a company isn’t growing, she said.

The yield on the 10-year Treasury note fell to 1.98 percent from 2.05 percent early Wednesday as demand increased for ultra-safe assets.

This article appeared in print on page 10 of the February 22nd, 2013 edition of Hamodia.