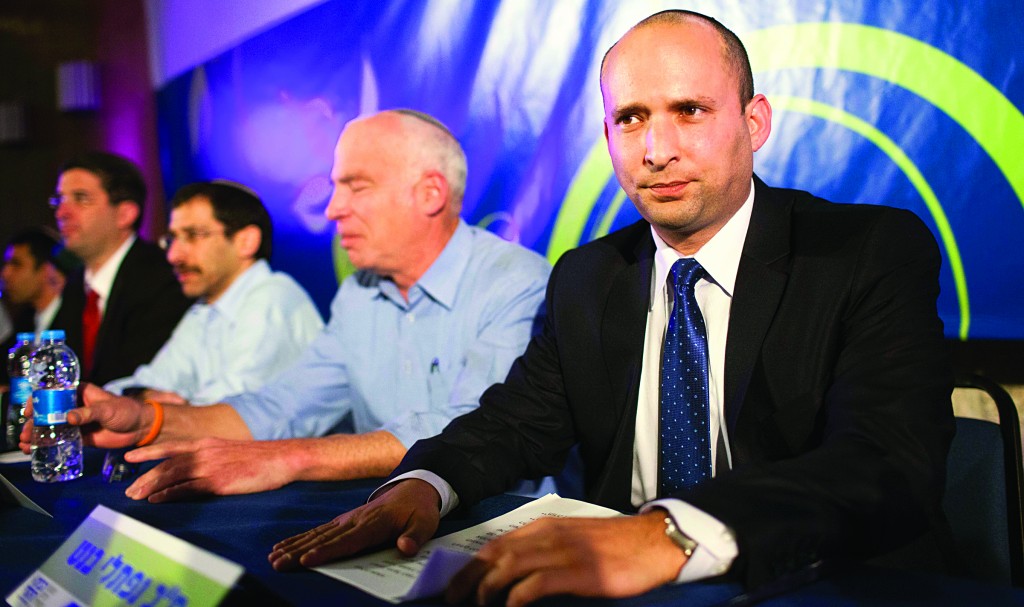 Likud officials were downplaying the significance of Tzipi Livni’s entrance into the next government, in hopes of preserving the Jewish Home party as a coalition partner, as well as quieting complaints from within their own party ranks.

“Nothing is stopping the Jewish Home from entering the coalition but themselves, and the offer for them to join the government still stands, a senior Likud source told The Jerusalem Post Wednesday morning.

“As it says in the coalition agreement, Prime Minister Netanyahu will stand at the head of a Ministerial Committee for Peace talks that will outline our policies in diplomatic negotiations,” the source said.

As one party source told Ynet, “Putting negotiations in the hands of the person who managed the talks on Yerushalayim, and who was responsible for the Gaza disengagement plan, will make it hard for Jewish Home to come to the table as part of coalition discussions.”

Remarks made by Livni at a party meeting Wednesday aimed at reassuring her liberal supporters will only serve to reinforce right-wing concerns.

Livni insisted that her criticism of Netanyahu from the last government, which she refused to join, stands.

“This time, it’s different, because Netanyahu put us in [the coalition] first,” she explained. “The question of what the government will look like is still open. It’s not a matter of portfolios or jobs, it’s the ability to influence the government’s decisions.”

She added that the Justice Ministry will allow her party to promote its worldview and prevent extremism.

A Likud official pointed out that the “Livni first” scenario need not have been.

“Jewish Home can only complain to itself,” he said. “They were given an offer to be the first partner in the Netanyahu government…Instead of joining and giving the national camp a majority, they are sticking with Yesh Atid.”

Despite Livni, MK Uri Ariel (JH) told Arutz Sheva on Wednesday that the path into the coalition remains open.

“There is progress, not in front of the cameras, but in various discussions with senior members of Likud,” he stated. However, he said, “it is not enough.”

Ariel dismissed media reports, based on “senior Likud sources,” that Jewish Home is “at war” with Likud.

Ultimately, he predicted, Jewish Home will be in the coalition. “Netanyahu needs us even if he doesn’t want us,” he said.

Jewish Home’s Central Committee met on Wednesday evening, where Chairman Naftali Bennett announced that the party will adopt his recommendations as to which MKs will serve in ministerial positions.

There was discontent within the Likud as well. The rationale of religious Zionists active in the mostly secular, centralist Likud has been that by working inside they can influence government policy has been weakened by the Netanyahu-Livni agreement.

MK Moshe Feiglin (Likud) expressed the anxiety on Wednesday, saying in response to a question about Livni, “I said what matters is not Tzipi Livni, but the Likud’s path.”

“Of course, Netanyahu has the mandate to bring in various partners and to create a broad-based, stable coalition. That said, Likud members expect that the Likud’s path will be the one leading the government, and that the Ehud Barak precedent will not return.”

“In short,” he added, “I hope that the Likud will be in the coalition, too… “

MK Eli Ben Dahan (Jewish Home) rejected such hopes. “I’m sorry to say that signing an agreement with Livni proves their influence [of Likud religious Zionists] is very small,” Ben Dahan stated. “I call for them and all the heads of regional councils in Yehudah and Shomron to prevent putting talks with the Palestinians in Livni’s hands and prevent forming a left-wing government.”

However, some observers took the Netanyahu-Livni agreement as a pragmatic, even cynical, deal, rather than a serious political shift.

”He will use her as a whitewash, as a PR (public relations) person overseas,” Yossi Verter, a political commentator for Haaretz, wrote cynically on Wednesday:

“He’ll send her often to the Americans and the Europeans, who like her, so she can explain how hard coalition life is, and how insubordinate the Palestinians are.”

Senior columnist Dan Margolit in Yisrael Hayom was outraged: “This move will strengthen in the heart of generations of younger Israelis the feeling that politicians are cynical beyond repair. A thousand civics lessons will not help to correct this harsh impression.”

Another commentator questioned the logic of Livni’s decision to join with Netanyahu now after refusing to do so four years ago when she was in a more advantageous position to influence policy. “How can she expect to achieve today, with only six seats, what she could not achieve four years ago with 28 seats?”

The embarrassing turnaround was also illustrated by Amir Peretz’s recent statement that “Our movement will not sit in a Netanyahu government, period,” and mocked the idea that Netanyahu will actually allow Livni to lead negotiations with the Palestinians.

Livni herself sidestepped specifics in an Army Radio interview. When asked on Wednesday whether Netanyahu had made her any promises to curb building in Yehudah and Shomron, Livni said the issue of reviving peace talks was “complicated.”

”After the government is formed, I will see what is needed to restart peace negotiations, what are the conditions and the positions of the United States, Europe and the Palestinians.

“Only after that will we know if there are any decisions the Israeli government needs to make,” she said.

If the cynics are correct, though, it would suggest that Livni’s participation in the government will not be a major obstacle to Jewish Home joining.

The Palestinians were circumspect in their official reaction: ”I hope [Livni’s appointment] is not a tactical move on the part of Mr. Netanyahu in preparation for the visit of Mr. Obama,” said Abdallah Abdallah, a senior official of PA President Mahmoud Abbas’s Fatah movement.

“Livni is experienced in peace negotiations, but what’s more important … is the political decision [she] will implement, and that depends on the policy of Netanyahu’s government,” Abdallah said.

Before she makes peace with the Palestinians, though, Livni will first have to make peace within her Movement party.

Tension was evident at a party meeting on Wednesday between MKs Amir Peretz and Amram Mitzna. Although Mitzna was No. 2 on the electoral list, and Peretz No. 3, it was Peretz who
was named Environmental Protection Minister, while Mitzna, will be consigned to the lesser post of Knesset committee chairman.

When Mitzna entered the room, he ignored Peretz’s outstretched hand when he approached to wish him happy birthday, responding with only a monosyllabic “yes.” It was Mitzna’s 68th birthday.