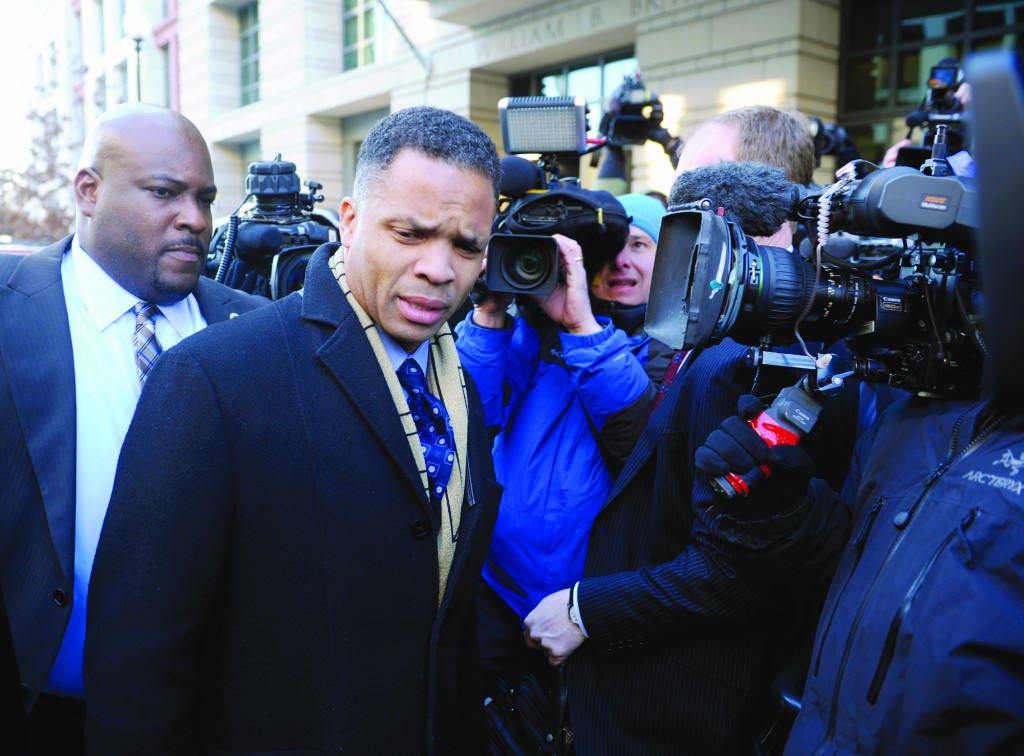 Former Rep. Jesse Jackson Jr., holding back tears, entered a guilty plea Wednesday in federal court to criminal charges that he engaged in a scheme to spend $750,000 in campaign funds on personal items. He faces 46 to 57 months in prison, and a fine of $10,000 to $100,000, under a plea deal with prosecutors.

A few hours later, his wife, Sandra, pleaded guilty to filing false joint federal income tax returns that knowingly understated the income the couple received. She faces one to two years in prison and a fine of $3,000 to $40,000.

Before entering the plea to a conspiracy charge, Jesse Jackson told U.S. District Judge Robert L. Wilkins, “I’ve never been more clear in my life” in his decision to plead guilty.

Later, when Wilkins asked if Jackson committed the acts outlined in court papers, the former congressman replied, “I did these things.” He added later, “Sir, for years I lived in my campaign,” and used money from the campaign for personal use.

Jackson dabbed his face with tissues, and at one point a court employee brought some tissues to Jackson’s lawyer, who gave them to the ex-congressman. Jackson told the judge he was waiving his right to trial.

“In perfect candor, your honor, I have no interest in wasting the taxpayers’ time or money,” he said.

Jackson had been a Democratic congressman from Illinois from 1995 until he resigned in November. He is scheduled to be sentenced June 28, and his wife July 1. Both are free until sentencing.

Since last June, Jesse Jackson has been hospitalized twice at the Mayo Clinic in Rochester, Minn., for treatment of bipolar disorder and other issues, and he stayed out of the public eye for months, even during the November elections. His attorney said after the court appearance that Jackson’s health is “not an excuse” for his actions, “just a fact.”

Jesse Jackson Jr. used campaign money to buy items including a $43,350 Rolex watch and $9,587.64 worth of furniture, according to court papers. His wife spent $5,150 on fur capes and parkas, the documents said. Under the plea deal, Jackson must forfeit $750,000, plus tens of thousands of dollars’ worth of memorabilia items and furs.