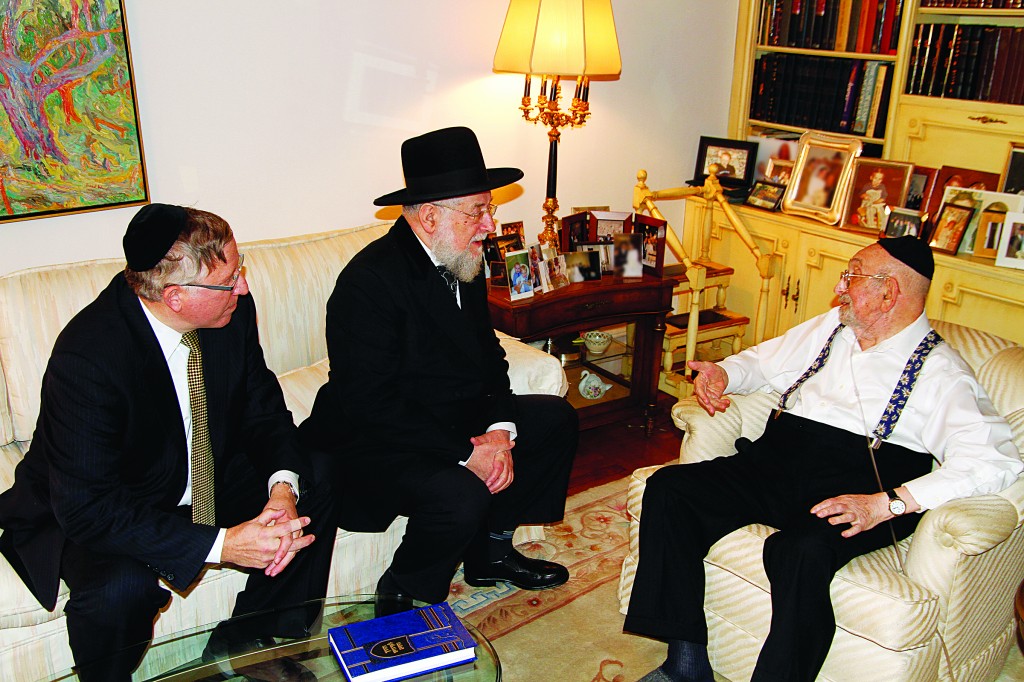 In January of 1945, Rabbi Yosef Friedenson, after suffering through the horrors of Auschwitz, Oranienburg, Sachsenhausen and Ohrdruff, was brought to Buchenwald. There he met Naphtali Lau, a fellow inmate, who was the son of Harav Moshe Chaim Lau, Rav of Piotrekow. Naphtali revealed to Yossel that his seven-and-a-half year old brother was also in the concentration camp.

“You have no idea what this is,” Rabbi Lau, speaking a classic Yiddish, declared. “I have brought you your friend’s book.”

It was the sefer, Haderech L’kiddush Hashem, based on the writings of Rabbi Lau’s father, and published to mark 70 years since Harav Moshe Chaim Lau, Hy”d, was killed in Treblinka al Kiddush Hashem.

Reb Yossel Friedenson, a preeminent Holocaust historian and longtime editor of Dos Yiddishe Vort, was born and raised in Lodz, located only 46 kilometers from Piotrekow. During the visit he recalled traveling to visit Rabbi Lau’s father at least three times, as well as the Piotrekow Rav’s frequent visits to the Friedenson home.

Reb Yossel’s father, Harav Eliezer Gershon Friedenson, Hy”d, was one of the founders of the Bais Yaakov movement and the editor of the prewar Bais Yaakov Journal. He was one of the most prominent askanim on behalf of Agudas Yisrael.

“Your father was in our house at least ten times,” Reb Yossel reminisced.

Reb Yossel expressed his hope that he would be able to write about the sefer he received in an upcoming edition of Dos Yiddishe Vort.

The fascinating conversation that followed covered a span of topics including the history of Lodz, the time they both spent in Buchenwald, Rabbi Lau’s autobiography and, of course, pre-war Jewish life.

At the conclusion of the visit, Rabbi Lau told him of a moving experience he had with Hagaon Harav Eliezer Schach, zt”l.

“I am a talmid of Harav Schach,” Rabbi Lau related. “The last time I came to visit him, he was 107 years old. I was Chief Rabbi of Israel at the time and he spoke to me like one speaks to a son.

Rabbi Lau then applied the same words to Reb Yossel.

Speaking to Hamodia after the visit, Reb Yossel said that the story of Rabbi Lau is a testament to the eternity of Am Yisrael.

“As a child survivor of Buchenwald, he came to Eretz Yisrael with only a small sack of belongings, and look what he became!” Reb Yossel marveled.