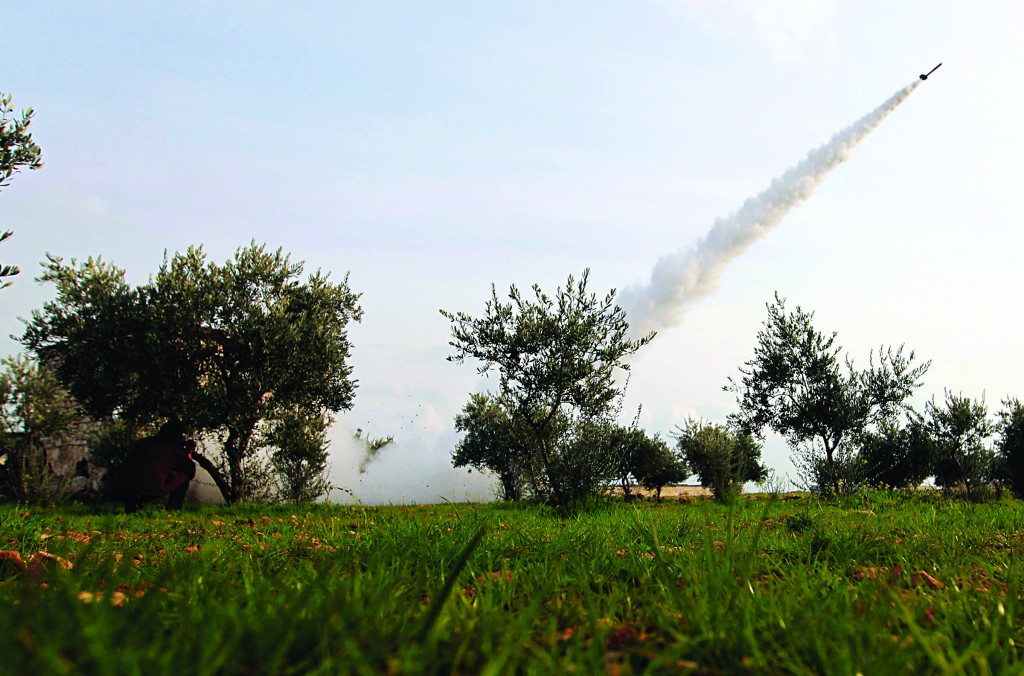 A Syrian missile strike leveled a block of buildings in an impoverished district of Aleppo on Tuesday, killing at least 33 people, almost half of them children, anti-regime activists said.

Many were trapped under the rubble of destroyed houses and piles of concrete and the death toll could still rise further if more bodies are uncovered.

The apparent ground-to-ground missile attack struck a quiet area that has been held by anti-regime fighters for many months, a reminder of how difficult it is for the opposition to defend territory in the face of the regime’s far superior weaponry.

In the capital Damascus, state-run news agency SANA said two mortars exploded near one of President Bashar Assad’s palaces. It dealt a symbolic blow to the embattled leader, who has tried to maintain an image as the head of a functioning state even as rebels edge closer to the heart of his seat of power.

No casualties were reported and it was unclear whether Assad was in the palace. He has two others in the city.

The attack was the first confirmed strike close to a presidential palace and another sign that the civil war is seeping into areas of the capital once considered safe.

“This is a clear message to the regime that nowhere is safe from now on,” said Khaled al-Shami, an activist in Damascus reached via Skype. “The fact that they had to announce it means they can no longer hide what is happening in Damascus.”

The news service, SANA, said “terrorists” fired the rounds that struck near the southern wall of the Tishreen palace in the capital’s northwestern Muhajireen district. The government refers to anti-government fighters as “terrorists.”

Assad often uses the Tishrin palace to receive dignitaries and as a guest house for foreign officials during their visits to Syria.

The capital has largely been spared the violence that has left other cities in ruins. For weeks, however, rebels who have established footholds in the suburbs have been pushing closer to the heart of Damascus from the eastern and southern outskirts, clashing with government forces.

Rebels have claimed to fire rockets at presidential palaces in Damascus before, but this strike was the first confirmed by the government.

The strike was the latest salvo in a fierce and bloody 7-month battle for Syria’s largest city and economic center, a key prize in the civil war.

Rebels have slowly expanded their control over parts of Aleppo since first storming it last summer. The city is now divided between rebel- and regime-controlled zones.

Rebel forces have been trying for weeks to capture Aleppo’s international airport and two military air bases nearby, while the government is bringing in reinforcements from areas it still controls further south and regularly bombing rebel areas from the air.

“Just in the last two months, over 250,000 people have fled into neighboring countries. These numbers, they are not sustainable,” she said at a press conference in Geneva.

The U.N. says more than 870,000 Syrians have fled to neighboring countries since the beginning of the conflict.