Benchmark crude for March delivery rose 80 cents to finish at $96.66 on the New York Mercantile Exchange. Brent crude, used to price many international varieties of oil, was down 34 cents to $117.66 per barrel on the ICE Futures exchange in London.

Official Chinese and American trade data indicate China passed the United States last year in total imports and exports by a margin of $3.866 trillion to $3.822 trillion. That is about $44 billion, or just over 1 percent of China’s total.

The Commerce Ministry has taken the unusual step of publicly denying China is the new No. 1. It says China still trailed the U.S. by $15.6 billion last year — or a razor-thin 0.3 percent — under World Trade Organization standards for valuing goods.

Beijing wants to be a global leader but insists it still is a poor country. It is wary of any change that might erode that status and fuel demands for action to stimulate the global economy or concessions on trade and climate change. 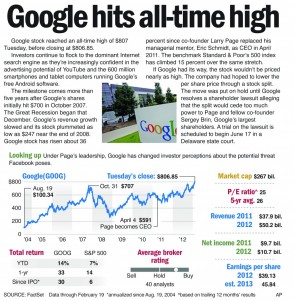 SAN FRANCISCO (AP) — Microsoft is so confident it has the internet’s best email service that it is about to spend at least $30 million to send its message across the U.S.

As part of the process, all users of Microsoft’s Hotmail and other email services operating under different domains such as MSN.com will be automatically converted to Outlook.com by the summer, if they don’t voluntarily switch before then. All the old messages, contacts and settings in the old inboxes will be exported to Outlook.com. Users will also be able to keep their old addresses.

Health insurance stocks wobbled Tuesday after data released by the federal government pointed to possible steep Medicare Advantage payment cuts in 2014, which could lead to reduced coverage or fewer options for people buying the plans.

The Centers for Medicare and Medicaid Services said Friday after markets closed that it expects costs per person for Medicare Advantage plans to fall more than 2 percent in 2014, a bigger drop than many analysts who cover the industry anticipated.

The government uses this figure as a benchmark to determine payments for these privately run versions of the government’s Medicare program that covers the elderly and disabled people, and analysts worry that this might lead to big payment cuts.