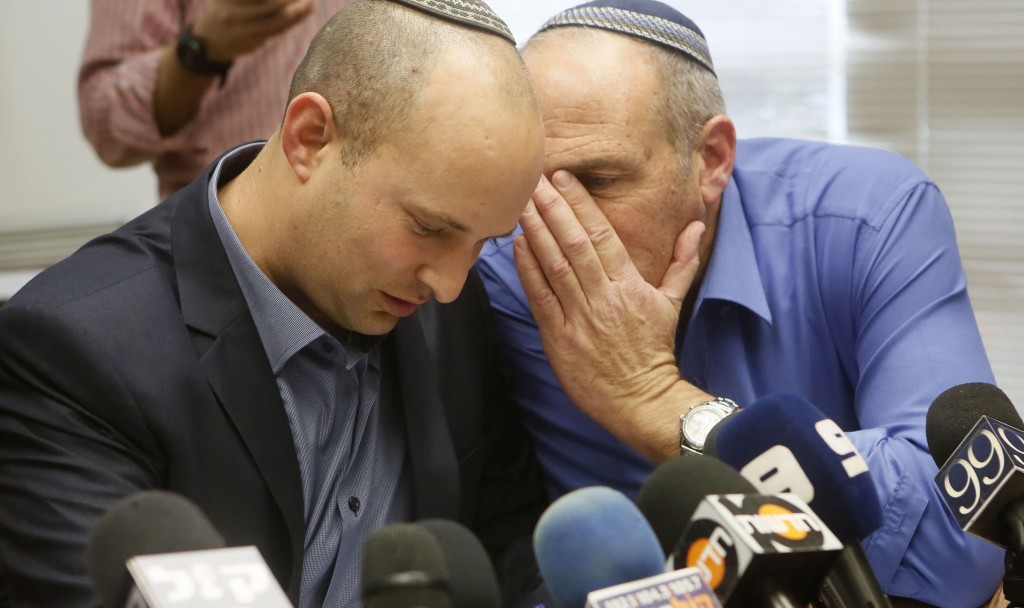 The coalition talks have reached an impasse due to the Yesh Atid-Jewish Home pact to exclude the chareidi parties, and Prime Minister Binyamin Netanyahu is fuming over it, according to sources within his Likud party.

Sources present at Netanyahu’s meeting with Likud ministers on Sunday said he referred to Yair Lapid and Naftali Bennett contemptuously, asserting that “their strategy is not to reach solutions on key issues, only to push out the chareidi parties.”

Netanyahu further denounced their self-serving attitude, caring only about advancing themselves politically rather than the good of the country.

As for Lapid’s much-trumpeted campaign to equalize the burden of IDF service by drafting chareidim, Netanyahu said that “it will neither bring equality nor ease anyone’s burden.”

Lapid and Bennet have agreed not to enter the coalition without the other, which they hope will force Netanyahu to give in to all their demands, namely Lapid’s demand to exclude chareidi parties from the government and that all yeshivah bachurim be drafted to the army or national service at the age of 18.

Israeli media reported that Netanyahu is trying to engineer a breakout from the Yesh Atid-Jewish Home siege by forming a coalition with the 57 MKs of Likud-Beiteinu, Shas, UTJ, Tzipi Livni’s Movement party and Kadima, and then give Bennett a choice between joining the coalition without Lapid or forcing another election in which the Left could come to power, which could be a nightmare for his right wing party.

In response, unnamed sources in Jewish Home told reporters they are unintimidated.  “Netanyahu is threatening us with an empty pistol. If elections are held today Likud will get 12 seats, because the public will punish him for failing to establish the most natural government — with us — which is what he should have done from the outset.”

Meanwhile, efforts were ongoing to pry Bennet from his enthrallment with Lapid.

Shas co-chairmen Arye Deri and Eli Yishai met respectively with the leader of Jewish Home’s Naftali Bennet and the leaders of the Council of Jewish Communities in Yehudah and Shomron.

One local leader told Yishai, “Bennett is making a mistake if he is seeking a temporary deal with Lapid rather than a stable bond with Shas.”

Yishai warned the leaders that “if there will be a diplomatic process, Lapid will throw Bennett out of the government. We [in Shas], however, are not a spare tire for the Left.”

Sources close to Bennett denied any anti-chareidi cabal. They insisted that if Netanyahu would seriously address the problem of “equalizing the burden” and reforming the electoral system, agreements with his and Lapid’s party could be reached in a short time.

“We want to enter the Israeli government to faithfully serve the people of Israel,” said Bennett, adding, “We are talking about the Netanyahu government and therefore we’ve said all the time that we have one candidate and that is Netanyahu.”

“Once they decide to negotiate,” said Bennett, “a government can be established within 24 hours.”

However, he has not backed down from his demand to draft yeshivah bachurim.

While Lapid and Bennett continued to play the part of idealists unwilling to discuss perks before principles, Tzipi Livni denied a report that she had accepted the Justice portfolio as the price of her joining the coalition. She was said to be close to an agreement.

“The Likud’s first partner is Livni, who will conduct negotiations [with the Palestinians], the same Livni who ran on a
campaign of creating a Palestinian state, who would divide Yerushalayim, and who said Netanyahu is leading Israel to a disaster,” said Jewish Home MK Ayelet Shaked sarcastically.

Shaked said it was incredible that the prime minister was offering the Finance Ministry to  Yacimovich, whose socioeconomic views have been totally at odds with his.

“Suddenly, Netanyahu will agree to an economic plan that costs 138 billion shekels and become a social democrat?” she asked.