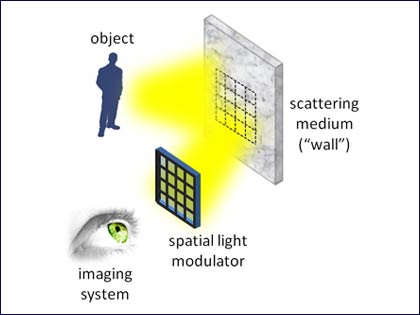 A research team at Israel’s Weizmann Institute of Science in Rehovot has developed a tool for seeing through semi-opaque objects such as human skin or eggshells. They believe this foundational research paves the way for a new kind of microscope, one that can see inside deep tissues and could one day do away with the need for cancer biopsies.

Their handmade invention, based on simple, cheap and readily available equipment, can also see around corners. While they are not the first in the world to be able to achieve these feats, they are the first to do it without the use of lasers — and they can do it in real time.

“Other teams used special lasers and scanned their target point by point,” says Ori Katz who worked on the project with Eran Small, under the guidance of Prof. Yaron Silberberg.

“Our technique is more straightforward and it can be done in such a way that any second-year physics college student can understand what’s going on.”

A simple digital camera, regular halogen light and a spatial light modulator found in digital projectors enabled this advance, says Katz. The field is called “wave front shaping,” and it allowed the team to study how light is absorbed by a semi-opaque object and then scattered.

While a human body, for instance, doesn’t appear to be transparent, when you shine a flashlight on the back of your hand in the dark, you’ll see that some light does shine through, Katz explains. This is called “scattered light.”

Once it was thought to be too difficult to make sense of scattered light because it appeared to be incredibly random and chaotic. But now with new HD imaging screens the researchers can amplify and analyze the scattering patterns.

By developing an algorithm that projects the inverse pattern, the researchers are able to detail what can be found inside an object that the naked eye could never decipher.

While they don’t think it will replace MRIs, they do think that it will help cut back the need for invasive procedures such as biopsies, or radiation-based imaging techniques  that aim to detect cancerous cells.

This basic premise of science could be developed so that using a non-ionizing radiation source like a halogen light, a doctor could look for lumps or ascertain what kind of material is inside a suspected tumor just by looking through a microscope placed on the outside of your skin.

Using a white wall like a mirror, the team used the same tools to see around corners. They can also see into a second room provided that there is a door open.

“When you look at a white wall, you see white because it reflects about 99 percent of the light. The surface of a wall is not as smooth as a mirror and it scatters and scrambles all the directions of light hitting it,” says Katz.

“We took a small portion of the wall, a couple of millimeters, and learned its properties and can now use it as a mirror. Since we know where each photon came from we applied the inverse wave pattern to see hidden optical images,” Katz explains.