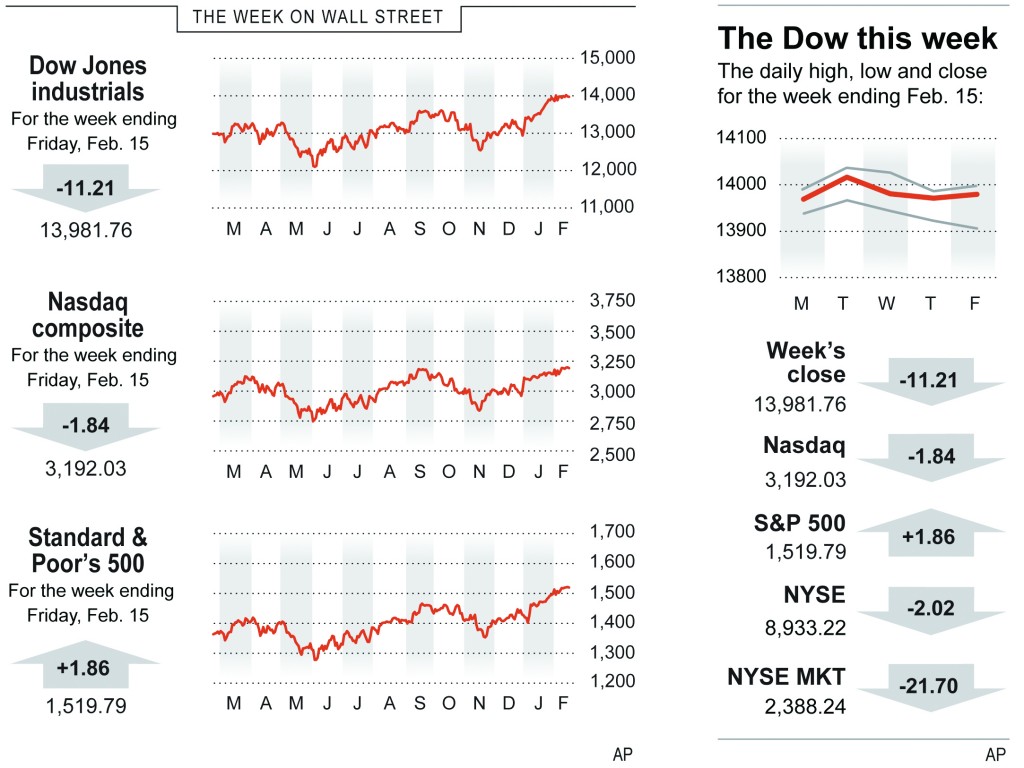 The Standard & Poor’s 500 ended the week nearly two points higher, enough to give it a seventh straight week of gains. That’s the longest stretch of advances in more than two years.

Investors piled into stocks at the beginning of the year after lawmakers reached a last-minute deal to avoid the “fiscal cliff” of sweeping tax hikes and spending cuts. The gains continued as investors were encouraged by signs that the housing and jobs markets are recovering. Company earnings have also held up well.

There are signs, however, that the rally is running out of steam.

The Dow Jones industrial average rose 8.37 points to close at 13,981.76 Friday, but ended the week down 11 points. The index has now edged lower for two straight weeks.

“We’ve just had such a fast start to the year,” said John Fox, manager of the FAM value fund. “It just makes sense that you are going to have a leveling or a slowdown.”

Walmart was the biggest decliner in the Dow Friday. The stock fell $1.52, or 2.2 percent, to $69.30 after Bloomberg News published excerpts from an internal e-mail that said sales in February were a “total disaster.” The retailer, which reports earnings next week, said that sometimes internal communications lacked “proper context” and “are not entirely accurate.”

Energy companies also contributed to the slump, following the price of crude oil lower. Chevron dropped 75 cents, or 0.6 percent, to $114.96.

Herbalife gained 47 cents, or 1.2 percent, to $38.74, and climbed as high as $44.93 after the billionaire investor Carl Icahn disclosed that he had accumulated a 13 percent stake in the company. The stock of the dietary supplement maker slumped last year after Pershing Square Capital Management’s William Ackman described it as a massive pyramid scheme and placed bets that it would fall.

Investors are continuing to put money into stocks. Lipper, a unit of financial data provider Thomson Reuters, reported that $2.4 billion flowed into stock funds this week, marking the sixth straight week of increases. In January $37.4 billion went into stock funds, the most in that month since 2000.

The yield on the 10-year Treasury note, which moves inversely to its price, has risen as investors have put more cash into stocks. The yield rose 1 basis point to 2.01 percent, having started the year at 1.70 percent.