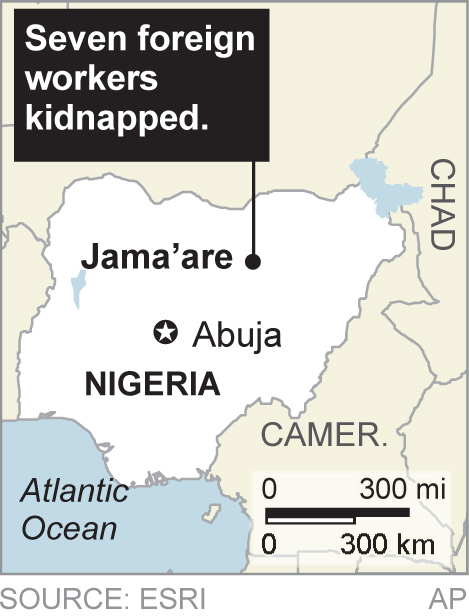 Gunmen attacked a camp for a construction company in rural northern Nigeria, killing a guard and kidnapping seven foreign workers from Britain, Greece, Italy, Lebanon and the Philippines, authorities said Sunday, in the biggest kidnapping yet in a region under attack by Islamic extremists.

The gunmen then targeted a workers’ camp for Lebanese construction company Setraco, which is building a road in the area, Muhammed said. The gunmen shot dead a guard at the camp before kidnapping the foreign workers, the spokesman said.

“The gunmen came with explosives, which they used to break some areas,” Muhammed said.

One British citizen, one Greek, one Italian, three Lebanese and one Filipino were kidnapped, said Adamu Aliyu, chairman of the government area that encompasses Jama’are. He said one of the hostages was a woman, and the rest were men.