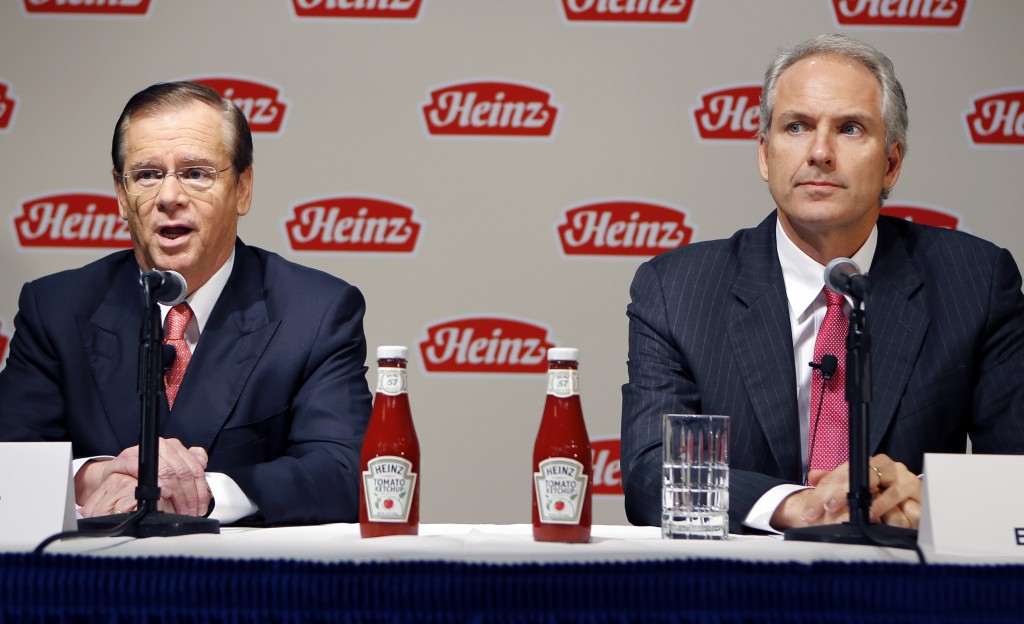 Billionaire Warren Buffett, the most closely watched investor in America, is putting his money into ketchup, agreeing to buy H.J. Heinz Co. for $23.3 billion in the richest deal ever in the food industry.

For his money, the Oracle of Omaha gets one of the nation’s oldest and most familiar brands, one that’s in refrigerators and kitchen cupboards all over the U.S.

The deal is intended to help Heinz accelerate its expansion from a dominant American name into a presence on grocery shelves worldwide. The Pittsburgh-based company also makes Classico pasta sauces and Ore-Ida potatoes, as well as a growing stable of sauces suited to regional tastes around the world Buffett’s investment firm, Berkshire Hathaway, is teaming with investment firm 3G Capital to snap up Heinz, which had long been a subject of takeover speculation. New York-based 3G is best known for its acquisitions of Burger King and its role in the deals that created Anheuser-Busch InBev, the world’s biggest beer maker.

The deal, expected to close in the third quarter, sent shares of Heinz soaring. The company’s stock price was up nearly 20 percent at $72.45 in afternoon trading on the New York Stock Exchange.

Berkshire remains the most expensive U.S. stock but it’s still below its all-time high of $151,650, reached in December 2007. That came before the financial turmoil of 2008 and just after an exceptionally profitable quarter that was helped by a $2 billion investment gain.

The plans to take Heinz private apparently began to take shape on a plane in early December. In an interview with CNBC, Buffett said he was approached at that time by Jorge Lemann, a fellow billionaire and a co-founder of 3G. The two had known each other since serving on the board of Gillette about 12 years ago.

Soon after that encounter, two of 3G’s managing partners traveled to Pittsburgh to have lunch with Heinz CEO William Johnson and raise the prospect of buying the 144-year-old company.

“The offer was such that I simply felt compelled to take it to my board,” Johnson said at a news conference yesterday. Over the next several weeks, he said, the board worked out details of the transaction.

Berkshire is putting up $12.12 billion in return for half of the equity in Heinz, as well as $8 billion of preferred shares that pay 9 percent, according to a filing with the Securities and Exchange Commission. 3G Capital will run Heinz, and Berkshire will be the financing partner.

By taking the company private, Johnson said, Heinz will have the flexibility to react more quickly without the pressure of satisfying investors with quarterly earnings reports. The company’s push to go global began more than a decade ago, and about two-thirds of its sales already come from outside the U.S.

Heinz is increasingly focusing on emerging markets, where it expects to get about a quarter of its sales this year. Like other packaged food companies, it is betting that staking an early claim in countries with multiplying ranks of middle-class customers will secure its own future.

The ever-expanding business reaches back to 1869, when Henry John Heinz and neighbor L. Clarence Noble began selling grated horseradish, bottled in a clear glass to showcase its purity. It wasn’t until 1876 that the company introduced its flagship product, marking the country’s first commercial ketchup.

Heinz didn’t become a public company until years later in 1946. In that regard, Johnson noted at the news conference, the deal was returning the company to its roots as a privately held entity.

Heinz is a prize because it has the type of name recognition that takes years to build, said Brian Sozzi, chief equities analyst for NBG Productions. One testament to the strength of the brand has been the company’s ability to raise prices even in the competitive market, he said.

“There isn’t going to be another Heinz brand,” Sozzi said.

Johnson stressed that Heinz would remain in its native Pittsburgh as a condition of the agreement with 3G and Berkshire Hathaway. The only change will be when Heinz no longer appears in stock listings.

“It’s our kind of company,” Buffett said. “I’ve sampled it many times.”