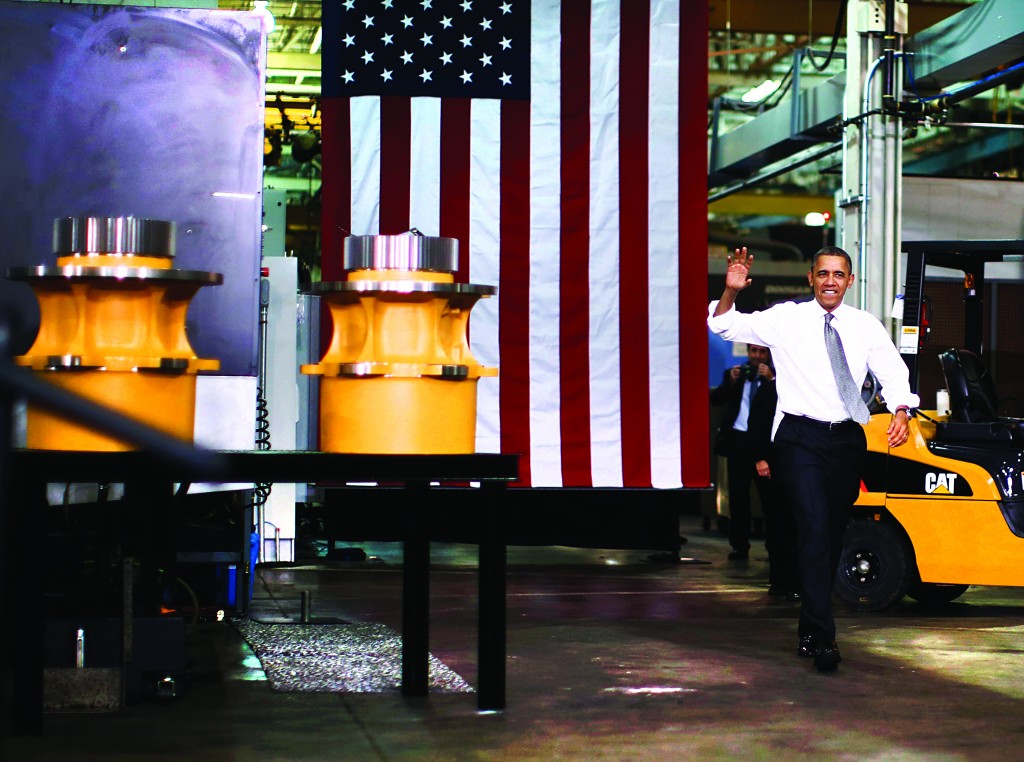 President Barack Obama visited a truck parts plant on Wednesday to highlight the role of U.S. manufacturing in reviving the economy, and follow up on his State of the Union message of strengthening the middle class.

“I believe in manufacturing,” he said, standing before a backdrop of massive parts made for 400-ton mining trucks. “It makes our country strong.”

Even though manufacturing makes up only roughly 12 percent of the economy, the White House argues that those numbers do not represent the importance of a sector that produces jobs that pay well and creates economic benefits beyond individual factories.

A day after his annual address to Congress in which he argued that the economic recovery must focus on creating opportunities for middle class workers, Obama hit the road for a three-day tour to rally public support for his proposals.

The president said on Tuesday he would pursue policies that would bring more jobs to the United States, train workers for the demands of changing technology, and ensure that workers could earn enough to escape poverty.

The Linamar Corp plant Obama visited is making engine blocks and wheel axles for giant mining trucks, and is emblematic of the type of manufacturing renaissance he hopes will take place more broadly.

The Canadian company employs 150 people with a plan to expand to 650 in coming years. Local officials attracted the company after a Volvo manufacturing plant shut its doors here in 2010 and moved more than 200 jobs out of state.

The president signed a toolbox and asked machinists about their work, stopping to inspect a gleaming silver hub.

Obama devoted a sizeable portion of his State of the Union address to describing how he sees manufacturing as a linchpin for expanding well-paying middle class jobs.

China has in the last few years eclipsed the United States as the world’s leading manufacturer. One reason is China’s low labor costs, and these have risen recently, making U.S. factories more competitive.

Obama renewed his call on Wednesday to Congress to support a plan to invest $1 billion in 15 manufacturing hubs across the country.

The president has said he would use executive powers to launch the first three hubs, with the defense and energy departments partnering with businesses, universities and community colleges to invest in the training and development centers.

He also proposed to lower taxes for manufacturers to 25 percent from the current level of 35 percent and offer tax breaks, while putting in place a minimum “offshoring” tax.

Obama will face opposition in Congress for the plan from Republicans, who believe government spending needs to be reined in because of ballooning deficits.

What About The Debt?

Mitch McConnell, the top Republican in the U.S. Senate, accused Obama of not paying enough attention to reducing the federal debt and deficit, as sweeping public spending cuts know as the “sequester” loom.

“I’m especially disappointed he chose not to seriously address the transcendent issue of our time, which is finding a way to control our spiraling debt before it controls us,” he said.

Critics from labor groups were also underwhelmed by Obama’s plan. “I saw no mention of his campaign pledge to create one million new manufacturing jobs,” said Scott Paul, president of the Alliance for American Manufacturing, which represents the United Steelworkers union.