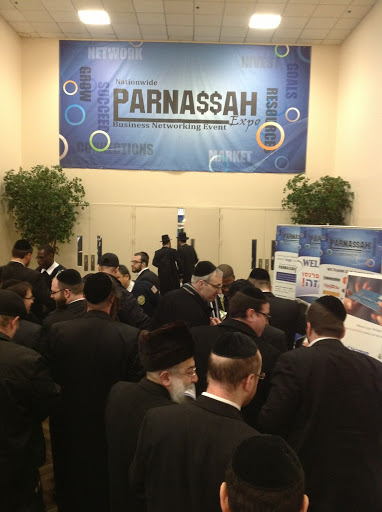 “This is by far the Jewish community’s largest business networking ever.”

Kevin Cummings, President and CEO of Investors Bank, the largest bank based in New Jersey, could barely hide his amazement at what he saw on Tuesday at the Meadowlands Exposition Center. The Nationwide Parnassah Expo and Business Networking Event drew an unprecedented crowd of businesspeople, professionals, activists, and those newly embarking on a career or entrepreneurial path. Mr. Cummings joined New Jersey Lieutenant Governor Kim Guadagno, Assemblyman Gary Schaer and many other dignitaries who addressed the Expo during its full schedule of seminars on pertinent business and career topics.

Parnassah Expo founder and director Reb Duvi Honig says that the community’s response to the event exceeded even his own ambitious expectations. People flocked from across North America, filling the massive 61,000 square feet to capacity. Shortly after the 8-hour Expo opened its doors at noon, the lines in the lobby were out the door and the Exposition Center’s 6,000 parking spots were filled, despite the throngs of people carpooling or arriving via mass transit.

“Last year, we held our inaugural Expo in a Lakewood hall and it was immediately overflowing,” Reb Duvi said happily. “This year, we expanded it to a venue like the Meadowlands and we’re back to the same ‘no parking left’!’”

Indeed, the vision behind the Parnassah Network organization, which hosted Parnassah Expo, was borne out in front of our eyes on every inch of the expo floor. Yidden of all ages, backgrounds, garb and talents were milling about, comfortably conversing and learning.

Employers fielded resumes, businesses showcased what they have to offer potential employees, entrepreneurs and investors networked, and networking pavilions in every major business field had lively roundtables and Q & A sessions among a diverse group of newcomers to business as well as veterans in the fields.

Even in today’s world of lightning-speed global communication, the power of face-to-face networking between members of our community fills an irreplaceable niche. “We already fielded over 100 resumes of qualified individuals, way more than we expected,” remarked Aron Hacoen of Centers Business Office, about halfway through the Expo. “Instead of just looking at papers, we got to personally meet the prospects, which makes the hiring process a lot clearer and more efficient for all.”