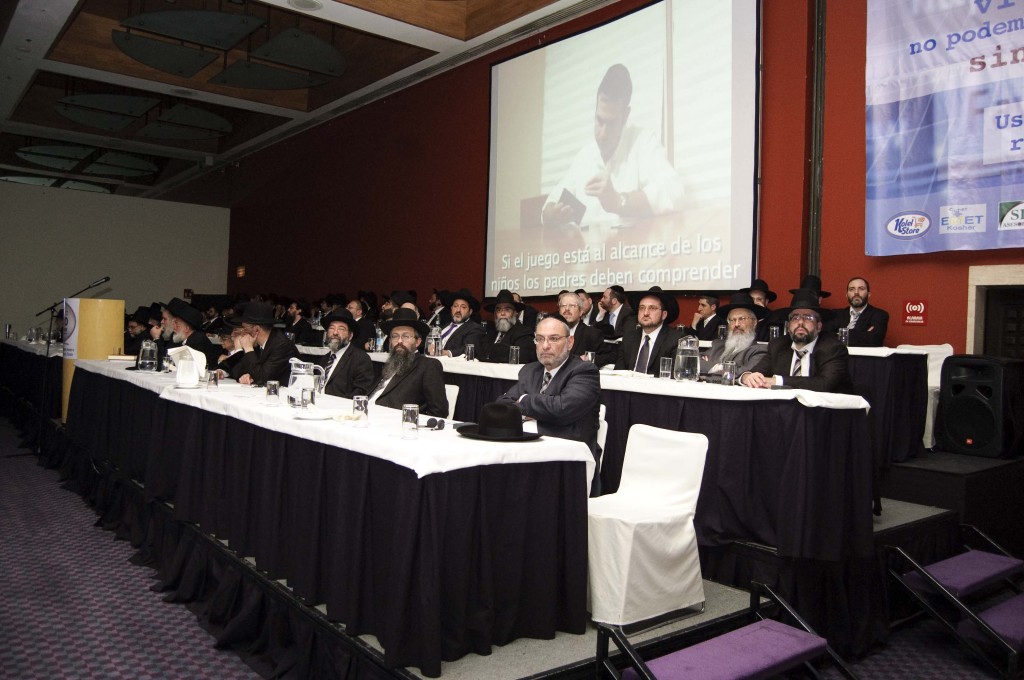 The effects of the historic Citi Field asifah last May continue to have an impact on Jewish communities near and far. On Monday evening, 2 Adar/Feb. 11, a similar asifah took place in Mexico City to raise awareness of the need for vigilance in internet use, under the auspices of Ichud HaKehillos LeTohar HaMachane and the Technology Awareness Group (TAG). The venue for the event was the Hotel Camino Real. The participants were addressed by Harav Dovid Ozeri, Rav of Yad Yosef Torah Center of Brooklyn; Harav Ephraim Wachsman, Rosh Yeshivah of Yeshivas Meor Yitzchok of Monsey; and Rabbi Nechemia Gottlieb, director of Ichud HaKehillos LeTohar HaMachane.

The event opened with introductory remarks by Rabbi Benny Cain, who along with Rabbi Rafi Harari, both chavrei hakollel at Kollel Maor Abraham, conceived the idea to open an Ichud Hakehillos office in Mexico and to organize the asifah.

Rabbi Nechemia Gottlieb stressed in his remarks the dangers of the internet and the undesirability of its use by anyone who does not have a pressing need to use it for business or other such matters.

Rabbi Ozeri recalled that he was struck by the extent of growth of the Mexico City community — home to several kollelim and numerous shuls and batei medrash — since his last visit there 30 years ago.

He recounted that a granddaughter of the Chofetz Chaim was drawn to the blandishments of the secular world and wondered why her holy grandfather would not “see the light” and share her world. The Chofetz Chaim put things in perspective for her: “They [the nations of the world] make bombs and planes, while we [Torah Jews] make mentchen.” Similarly, the images of secular culture, as transmitted on the internet and via other modern technology, serve to wreak havoc on the greatness of man, while Torah serves to build up gadlus ha’adam.

Rabbi Ozeri shared with the olam in the large hall frightening statistics as to the profitability of inappropriate websites in order to illustrate the global extent of the problem.

He related that a yeshivah bachur approached him to suggest to his father that he be sent to an out-of-town yeshivah. The problem was that the family, its frumkeit notwithstanding, had an unfiltered internet connection at home. The bachur was getting addicted to its use by going online in the middle of the night when the family was asleep. The opportunity was too tempting and he wished to avoid the nisayon altogether by learning away from home, despite his success in his present, local yeshivah. Such is the degree of this daunting nisayon for our young people.

The Rav said that the day before the CitiField asifah, the secular media had reported on how menacing a phenomenon is the internet. Yet there is a difference between how the secular world and, l’havdil, the olam haTorah responds to such an alarming account. Only the Torah community accepts with love and seriousness the words of mussar and admonishment its members hear from their Rabbanim, and steadfastly act upon these messages. The secularists hear the facts and yet, for the most part, continue in their ways despite the harm involved.

Harav Wachsman noted that we have just entered the month of Adar, when we increase in simchah. “How much simchah the Ribbono shel Olam has as He looks down upon the Torah enclave of Mexico City and the incredible maamad taking place here!” exclaimed Harav Wachsman.

The Rosh Yeshivah pointed out that there are certain elements in Yiddishkeit whose operation we are moser nefesh to continue, despite the huge expense involved, such as yeshivos and kashrus. The reason is that without their existence, the entire structure of Yiddishkeit that we strove so valiantly to build up can get lost, chas v’shalom. The present efforts to preserve the sanctity of Klal Yisrael by combating the nefarious impact of modern technology fall into the same category, he said.

Harav Wachsman pointed out that in the Purim story, Achashverosh urged the Yidden to indulge in material pleasures in an uninhibited way. This is the essence of the internet — one can pursue every type of amusement unashamedly and without anyone knowing about it.

In Megillas Esther, the extravagance of the king’s feast is conveyed by the fact that the drinks were served in golden goblets. It is instructive that we read the words “v’cheilim mi-keilim shonim — no two goblets were alike” (1:7) according to the trop of Megillas Eichah, which demonstrates how spiritually injurious is the pursuit of unlimited pleasure, so widely encouraged on the internet.

The yetzer hara will allow us to keep all the mitzvos of the Torah, as long as our neshamah is not nourished by Yiddishe ideals but by those of the nations of the world, averred the Rosh Yeshivah. The yetzer hara harnesses the power of our imagination in influencing us to go after enticements that appear enjoyable, although they are essentially devoid of substance.

Regarding the internet in particular, “If you don’t need it, don’t have it,” thundered Harav Wachsman.

The Rosh Yeshivah recalled that in a summer camp, a large group of 10- and 11-year-old campers all admitted that they had seen inappropriate material on the internet on the computer in their homes. Where is the parental responsibility? he asked.

In the Russian army, there was a Jewish soldier who was determined to fast on Yom Kippur although he knew that such conduct was not feasible during the war and could even lead to severe punishment were the authorities to know. He knew, however, that loss of a tooth would enable him to be sent away from the front to the first-aid facility, where he would sit out Yom Kippur and would be able to fast. With no dental tools or anesthesia, he managed to extract a tooth and gain his exemption from battle. The soldier managed to fast on Yom Kippur for six years in a row using this uncomfortable strategy. Such is the spiritual stamina of a Yid to overcome tests and challenges to his ruchniyus.

Harav Wachsman said that during the war years, when his mother and her siblings were compelled to dress like non-Jews, his mother would nightly whisper into the ears of her siblings their Jewish names, so that they would remember their roots. “Do that tonight for your children,” urged the Rosh Yeshivah.

At that point, Harav Wachsman underscored the message by leading the assembled in a stirring rendition of the song “V’zakeini lir’os banim,” which greatly moved the tzibbur in the large hall, and cemented the effect of the inspiring divrei chizuk they had just heard.

An educational video was shown, which informed the crowd of the opening of the TAG office in Mexico. At present, the group has 25 offices in various Jewish communities, which receive a total of around 400 calls daily requesting guidance on internet use.

Hamodia learned from the askanim that while the hall had been prepared for 1,200 attendees, several hundred more showed up, making for an overflow crowd. Askanim related that the crowd was visibly moved by the inspiration generated at the maamad, and left on a note of resolve to implement the information they had learned.