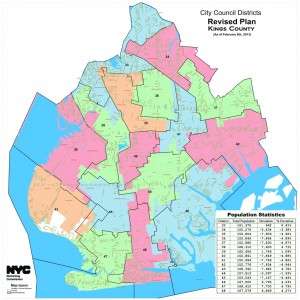 The City Council maps likely to be final for the next 10 years were released last Monday, leaving elected officials and community organizations bristling at what they view as the marginalization of south Brooklyn’s Orthodox population.

“Save Flatbush” posters were being circulated and local councilmen are threatening to vote against the map if it is not changed. But that is an extremely unlikely scenario at this late juncture since the council has until March to vote the lines down or a court will impose one. And a movement to move council primaries to as early as June adds an urgency for candidates running.

A group of activists, primarily those living in Flatbush whose districts would be affected by the once-in-a-decade map redrawing, had wanted to completely reshape the boundaries of the City Council districts in south Brooklyn — home to more than a half million mostly-Orthodox Jews — to reflect their growing numbers.

The activists felt that, as a “community of interest,” mandated by the city charter to have its own representation, the Orthodox community should have an impact in more than the single district they currently have.

The biggest chunk of the Orthodox community in Boro Park, Flatbush, Bensonhurst and nearby neighborhoods is in the 44th district, represented by David Greenfield.

But eight other legislators have smaller parts, from Brad Lander’s several tens of thousands of Orthodox families to Vincent Gentile’s couple of thousand.

Mr. Lander acknowledged that his overall slice of Boro Park diminished but said he was happy to have much of what was taken away in previous versions restored in the final map.

“I am pleased to continue representing a nice piece of Boro Park — a little smaller than before but still very significant,” Mr. Lander said. “I look forward to doing my best to serve the community.”

Mr. Lander said he was happy with the lines but did not want to commit yet to voting for it if the map came up at the council. Mr. Nelson, however, said that he is joining Mr. Greenfield in “blasting” the commission and promised to vote against it.

“It is abundantly clear that the plan does not comply with the ‘fair and effective representation’ guideline intended to protect racial and language minority groups,” Mr, Nelson said in a sharply worded statement. “Here in the 48th council district, the plan, if adopted as redrawn, will create a super-concentrated Russian language minority district.”

Mr. Nelson charged that the map discriminates against the Orthodox Jewish community by “pushing” them into a district where “there is little to no shared common religious, social, cultural, ethnic or economic interests.”

The fight to consolidate the nine districts into six — three of them having the majority and three having a significant placement — has long been a dream of many Orthodox organizations.

But several obstacles have stood in the way.

For one, each of the city’s 51 districts must consist of approximately 160,000 people, with six districts specifically earmarked by federal mandate to be a majority of African-Americans.

Three of those six border the center of the Orthodox community — Jumaane Williams’s and Mathieu Eugene’s, and Lew Fidler’s current seat when the new maps come into force — making any changes more complex and sensitive.

But local officials were convinced that a way could have been found to add enough Jews to surrounding districts to give the community additional clout, without running afoul of the Voting Rights Act.

A series of hearings passed under the Independent Districting Commission, but their eventual map changed the lines so much that Orthodox activists accused them of deliberately diluting their power. However, a last-minute change, in which a district was altered to allow disgraced former Assemblyman Vito Lopez (D-Brooklyn) to run in a Council district that favored him, caused Speaker Christine Quinn to return the maps to the commission for a third round.

That raised the hopes of Mr. Goldenberg and others that with a new game plan, as well as a partnership with Mr. Greenfield, previously an ardent critic of “super-Jewish” districts, they could have a controlling hold on at least two districts. Well over 100 members of Jewish groups testified over a few days of hearings in January.

Monday’s lines erased that optimism. While a few hundred Orthodox voters were moved east from Mr. Williams’s district to Mr. Nelson’s, padding the latter’s Orthodox representation to about 30 percent of his district, 2,000 Russian speakers were added from the east, to make it a Russian majority neighborhood.

And complaints were raised that Mr. Williams’s district was emptied of any substantial Orthodox population, depriving the community of what used to be a district they could have an impact in.

“What they’ve accomplished is that they have completely marginalized us,” Mr. Goldenberg, who testified at all three sets of commission hearings, said.

Mr. Greenfield said that the new lines are progress from previous versions, but he was disappointed that the commission did not go further.

“It was better than the first draft, for sure. They made improvements over those lines,” he said. “But in terms of what we wanted in the second draft, we did not get what we wanted. There were things that could have been done that would have made the district neater, cleaner and happier.”

Mr. Greenfield said that with some relatively simple maneuvers, the commission could have spread the community among five districts instead of the current nine.

While other Council members, particularly those representing Asian districts, complained that the lines reduce their strength, Mr. Greenfield and Mr. Nelson were the only ones to say that they would fight the map.

“Unless there are changes made,” Mr. Greenfield said, “I’m inclined to vote against it.”

There are no Council hearings scheduled on the lines, and the map does not even need a Council vote to become permanent. The only way to send it back to the commission for a redo is if a Council majority specifically votes against it or the U.S. Department of Justice deems the lines at variance with the 1965 Voting Rights Act, which establishes a minimum of black districts.

Chaskel Bennett, an activist who testified at the hearings, is not ready to give up yet.

“This is terribly wrong,” Mr. Bennett said. “We have seen exponential growth over the past 10 years and instead of strengthening the council district and the voice of the people, this process has done just the opposite and undermined it.”

There are 15 commissioners, chaired by Carl Hum. Seven were appointed by Mayor Michael Bloomberg, five by Ms. Quinn and three by the Council minority leader, making it unlikely that the commission would go against the speaker’s wishes.

And Mr. Goldenberg claimed that during one of the hearings, one of the commissioners clearly said that part of its mandate was that “the elected officials’ electability was taken into account.”

The commissioner later denied saying so.

Mr. Greenfield, who likely emerges as the only “super-Jewish” councilman, said that his goal from now is to work with his city council colleagues on behalf of the community.

“We will make lemonade from lemons,” he added.

Mr. Goldenberg put the blame for the map on the city’s political establishment and the commission, which he says did not live up to its charter to remain independent.

“When 200 people show up at a hearing for it and they were not taken into account,” he said, “it shows that this was not a fully independent commission.”

“At the end of the day, the speaker holds five seats on the commission, and the commission is not apolitical, it’s all political appointments,” Mr. Goldenberg said.

This article appeared in print on page D1 of the February 13th, 2013 edition of Hamodia.