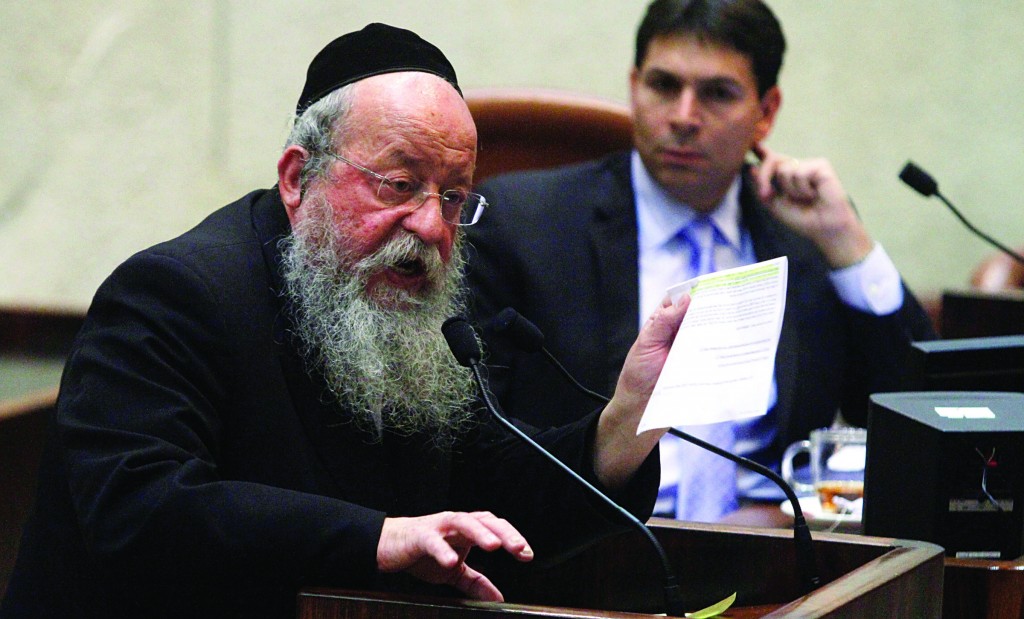 Convening for the first time three weeks after national elections, the 19th Knesset opened with an unexpected and dramatic confrontation between the leader of secular forces seeking to impose a military draft on yeshivah students and a representative of the chareidi parties defending the right of those students to continue their Torah studies undisturbed.

The full Knesset plenum and hundreds of spectators and media sat riveted as Yesh Yatid leader Yair Lapid made his first speech in the Knesset, an aggressive statement of his uncompromising stance on military service which threatens national discord.

In addition to reiterating his insistence on abolishing the status quo which has granted exemptions for full-time yeshivah students since the country’s inception, Lapid declared that Israel “cannot avoid ‘equality in sharing the burden’ just because 10% of the population threatens the other 90% with a civil war. There will be no civil war.”

In a direct challenge to the chareidi community and its Torah leadership, Lapid said that “whoever is involved in this debate is entitled to have his voice heard … But he must also know that even if the state decides against that which is most holy in his eyes, he must heed that decision.”

As soon as Lapid had finished “laying down the law” of democracy, veteran United Torah Judaism MK Rabbi Menachem Eliezer Moses took the podium and issued a resounding rebuttal.

The outgoing deputy education minister rebuked the freshman MK for his distorted presentation of a minority which rules over the majority and refuses to shoulder its share of the national burden.

Citing the famous remark of former Prime Minister Ariel Sharon which has become a byword of Israeli politics — “what you see from here, you don’t see from there” — Rabbi Moses expressed his hope that now from “here,” his new vantage point in the Knesset, Lapid will begin to see things differently than he did from “there,” before he entered politics.

Addressing Lapid directly, Rabbi Moses quoted statistics to show the extent of the burden that majority is placing on society. “Allow me to correct you, with facts that perhaps you did not see from ‘there’:

“30,000 pending police cases against Israeli youth … 60,000 students using drugs … 200,000 students involved in drinking and drunkenness … 2,000 public school teachers physically assaulted by their students …” This, he said is the fruit of the non-chareidi state educational system in Israel.

“You spoke about 90 percent versus 10 percent. But in the educational sector the majority and minority have changed, even though the budget remains as it was in the past, 90 percent of the money going to the majority. In 2012, the educational budget was 60 billion shekels. But only 5 billion was allocated to chareidi schools. This, when the percentage of chareidi enrollment in the early grades stands at 32 percent of the total, in grades 7-8 at 26 percent. … This,” observed Moses with a cynical inflection, “is your exploitation of the majority by a minority.”

“The government faces a massive budget deficit. If you take the bachurim into prison, it will cost a lot more to the state.”

He concluded by quoting the words of the Belzer Rebbe at the recent Moetzes meeting in Bnei Brak, who said that if necessary the Gedolei Yisrael will go to prison with the yeshivah bachurim, lest the study of Torah in Israel cease.

It is worth noting that although Lapid’s speech was widely covered in the Israeli media, MK Rabbi Moses’s response was not.

On Tuesday, Jewish Home chairman Naftali Bennett made his first speech to the Knesset, which also dwelt largely on the draft issue. Though his tone was more conciliatory, it was unclear how different his position was from Lapid’s. While referring to the chareidim as “our brothers,” he said that the draft situation “cannot continue,” and urged them to serve in the army.