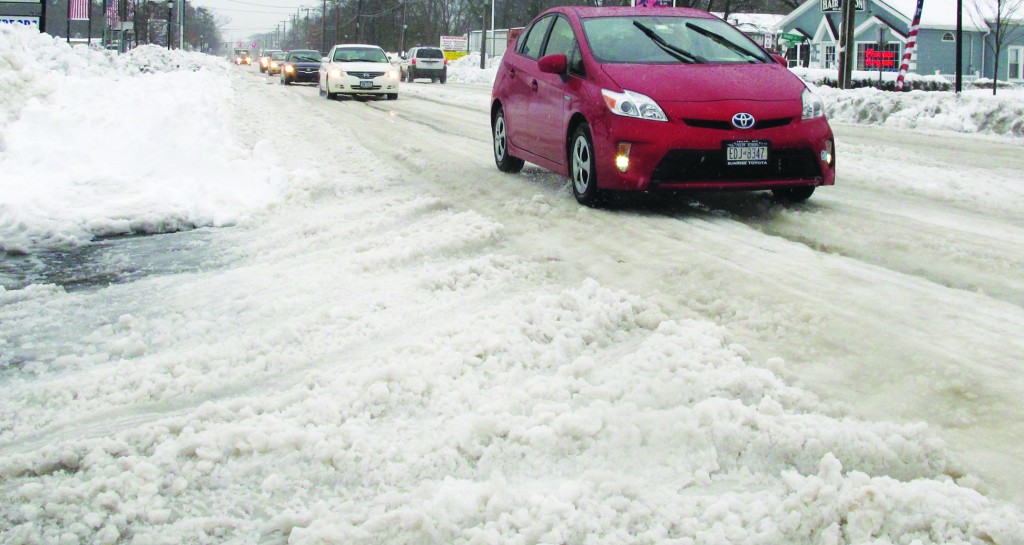 The workweek opened with a white-knuckle ride Monday in the snow-clobbered Northeast as drivers encountered unplowed streets, two-lane roads reduced to a single channel and snowbanks so high it was impossible see around corners.

Schools remained closed across much of New England and New York, and about 140,000 homes and businesses were still waiting for the electricity to come back on after the epic storm swept through on Friday and Saturday with 1 to 3 feet of snow that entombed cars and sealed up driveways.

The storm was blamed for at least 15 deaths in the U.S. and Canada, and officials warned of a new danger as rain and higher temperatures set in: roof collapses.

In hard-hit Connecticut, where some places were buried in more than 3 feet of snow, the National Guard used heavy equipment to clear roads in the state’s three biggest cities.

“This is awful,” said Fernando Colon of South Windsor, Conn., who was driving to work at Bradley International Airport near Hartford on a two-lane highway that was down to one lane because of high snowbanks.

Most major highways were cleared by Monday, but the volume of snow was just too much to handle on many secondary roads. A mix of sleet and rain also created new headaches. A 10-mile stretch of Interstate 91 just north of Hartford to Massachusetts was closed briefly because of ice and accidents.

In New York, where hundreds of cars became stuck on the Long Island Expressway on Friday night and early Saturday morning, some motorists vented their anger at Gov. Andrew Cuomo for not acting more quickly to shut down major roads, as other governors did, and for not plowing more aggressively.

“There were cars scattered all over the place. They should have just told people in the morning, ‘Don’t bother going in because we’re going to close the roads by 3 o’clock.’ I think Boston and Connecticut had the right idea telling everybody to stay off the roads and we got a better chance of clearing it up,” said George Kiriakos, an investment consultant from Bohemia, N.Y.

On Monday morning, he said, conditions were still miserable: “It’s just as slick as can be. You’ve got cars stuck all over like it’s an obstacle course.”

Cuomo has defended his handling of the crisis and said that more than one-third of all the state’s snow-removal equipment had been sent to the area. He said he wanted to give people the chance to get home from work. “People need to act responsibly in these situations,” he said.

The number of homes and businesses without power was down from a peak at 650,000. Nearly 120,000 of those still waiting were in Massachusetts.

Jim and Brenda Stewart of Marshfield, Mass. were using their fireplace to stay warm. Brenda, a nurse, said they were getting a bit bored but that she was reading and painting snow scenes to pass the time.

While many attempted to resume their work-week routines, others remained hopelessly stranded.

In Hamden, Conn., which received 40 inches of snow, nurse Sandy Benoit said she could not leave the house because her driveway had not been plowed. She didn’t think her street was plowed either, but she couldn’t be sure because she had to turn back after walking part of the way in knee-deep snow.

Across the region, big piles of snow blocked sight lines at intersections and highway ramps, making turning and merging hazardous. Some drivers decided the safe thing to do was to stay in the tracks cut by the cars ahead of them.

Peter Starkel, chief of the volunteer fire department in Columbia, Conn., said was difficult to maneuver emergency vehicles on the snow-narrowed roads. During one emergency medical call, “we physically could not turn the vehicles around,” he said. “So we had to back about a half-mile down the road to the closest intersection just to get out.”

In North Haven, Conn., First Selectman Michael Freda said that with many driveways still to be cleared, people were running out of heating oil and prescription medication. “What this is creating, particularly in the senior citizen sector, is a psychological anxiety,” he said.

Connecticut Gov. Dannel P. Malloy said there have been about six roof collapses so far involving barns and other structures.

Officials said people should try to clear flat or gently sloped roofs to relieve the weight – but only if they can do so safely.

Officials warned of the danger of carbon monoxide poisoning. In Boston, two people died Saturday, overcome by fumes, sitting in running cars. A teenager died trying to stay warm while his father shoveled, and the car’s tailpipes were clogged with snow.