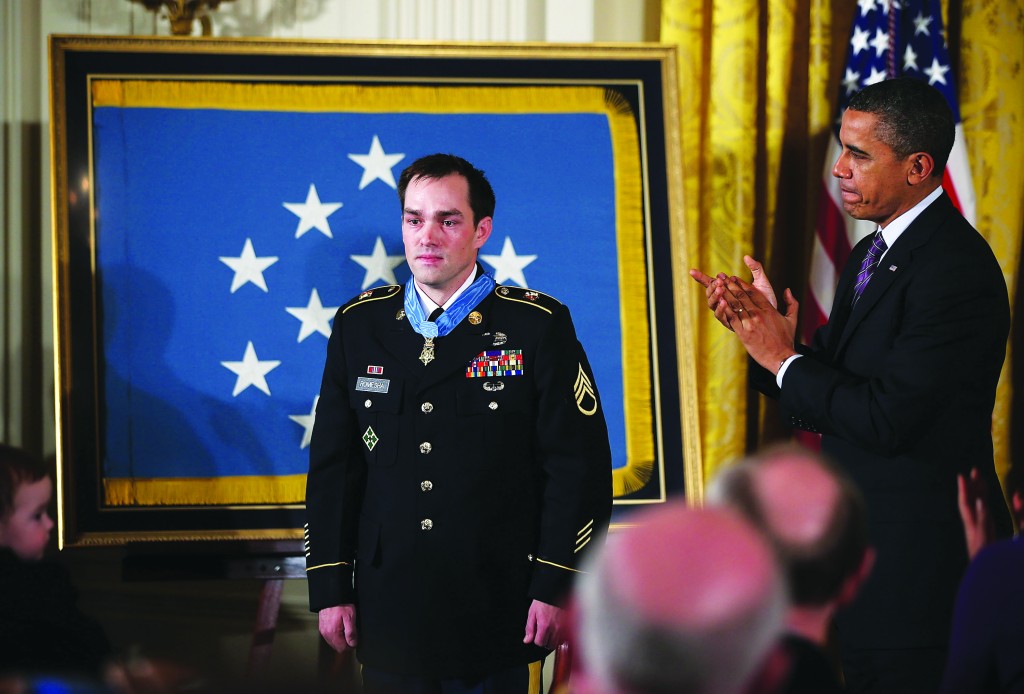 A veteran who helped “defend the indefensible” at a vulnerable Army outpost in Afghanistan received the nation’s highest award for military valor Monday at a tearful White House ceremony that also honored the eight men who did not survive a Taliban attack.

President Barack Obama lauded former Staff Sgt. Clinton Romesha’s bravery in fighting back an intense daylong barrage by enemy fighters. The Taliban descended on Combat Outpost Keating in the mountains near the Pakistan border at 6 a.m. on Oct. 3, 2009, shaking Romesha out of his bed into what Obama said has been called one of the most intense battles of the war in Afghanistan.

The Americans were outmanned 53 to more than 300, but most survived against those odds. “These men were outnumbered, outgunned, and almost overrun,” Obama said.

Romesha, 31, listened to the commendation while fighting back tears, sometimes unsuccessfully, the families of his fallen comrades sitting together and crying near the back of his East Room audience. Other troops who fought that day also watched as the president placed the medal hanging from a blue ribbon around Romesha’s neck.

“I’m feeling conflicted with this medal I now wear,” Romesha told reporters outside the West Wing after the ceremony. “The joy comes from recognition for us doing our jobs as soldiers on distant battlefields, but is countered by the constant reminder of the loss of our battle buddies, my battle buddies, my soldiers, my friends.”

Eight U.S. soldiers were killed in the fighting and other 22 wounded, including Romesha, who was peppered with shrapnel from a rocket-propelled grenade in the hip, arm and neck. But he fought through his wounds to help lead other soldiers to safety, defend the burning camp from encroaching Taliban fighters, personally taking out at least 10, and retrieve the bodies of the fallen Americans.

Romesha also served twice in Iraq and is the fourth living Medal of Honor recipient for actions in Iraq or Afghanistan.