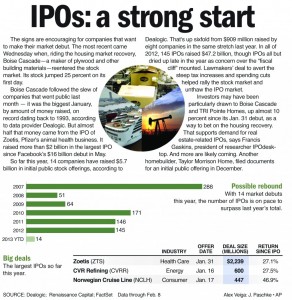 Stocks edged higher on Wall Street Friday after the government reported that the U.S. trade deficit narrowed sharply in December. The major indexes were also boosted by strong earnings reports.

The government estimated that the U.S. economy contracted at an annual rate of 0.1 percent in the last three months of 2012. Orlando estimates that growth may now be revised to show growth of 0.5 percent.

Shares of LinkedIn, the online professional networking service, jumped $27.44, or 22 percent, to $147.60 after the company reported fourth-quarter results late Thursday that beat analysts’ forecasts. AOL soared $2.20 to $33.61 Friday after the internet company said its quarterly revenue grew for the first time in eight years, helped by strength in worldwide advertising.

Currently, analysts are expecting earnings for the fourth quarter of 2012 to rise 6.5 percent for S&P 500 companies, according to data from S&P Capital I&Q. That’s an increase from the 2.4 percent growth rate recorded for the preceding quarter.

Wall Street also braced for what was forecast to be the largest winter storm in more than a year with up to 2 feet of snow forecast along the densely populated Interstate 95 corridor from the New York City area to Boston and beyond.

Markets are little changed for the week, suggesting that a rally that pushed the major indexes close to record levels early this year may have stalled.

The Dow had its best January in almost two decades and is up 6.9 percent on the year. The S&P 500 is 6.4 percent higher in the same period. A last-minute budget deal to avoid the “fiscal cliff” and optimism about the housing market and a gradually improving jobs market have powered the rally.

Stocks have benefited as investors poured a net $4.1 billion into stock mutual funds since the start of the year, according to data provided by Lipper.

“I’m very encouraged by the fact, that finally, for the first time in many years, individual investors seem to be participating in this,” said David Kelly, chief global strategist at J.P. Morgan Funds.

As stocks have gained, Treasurys have slumped. The yield on the 10-year note rose, which moves inversely to its price, rose one basis point to 1.97 percent.

This article appeared in print on page 8 of the February 11th, 2013 edition of Hamodia.