State of the Union a Sleepless Frenzy for Speechwriters 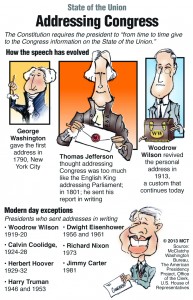 Cody Keenan haunts the basement of the West Wing at all hours, laboring over the State of the Union address.

The pressure is on the ruddy 32-year-old wordsmith; the nationally broadcasted address Tuesday will be his first major effort since President Barack Obama named him chief White House speechwriter.

In the small club of past presidential speechwriters, the State of the Union is known as a notoriously miserable task. It’s also a peculiar puzzle, as much policy document as speech, but dressed up with prime-time-worthy prose.

When successful, it can set a tone, seize a moment or shift a debate. As often as not, it is forgettable, dull or memorable only for mishaps.

The first State of the Union in a second term has an added burden; it can set the agenda for the relatively brief window of productivity for a lame-duck president. In Obama’s case, expectations were raised by last month’s inaugural speech, which surprised many by laying out an assertive liberal agenda. 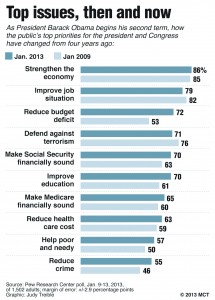 Speechwriters often begin working on the address months in advance, and experts say the process can be intense, not to mention stomach-churning. Interest groups, aides, agencies and first ladies have been known to want their way with it and their words in it.

“It’s probably the hardest thing I’ve ever done, and I’ve done a lot of hard things,” said Don Baer, a chief speechwriter and adviser in the Clinton administration and now chief executive of Burson-Marsteller, an international communications company.

“Everybody wants their program, their project. You get rooms full of suggestions, memos from Cabinet departments you didn’t even know existed,” said Joshua Gilder, who worked as a senior speechwriter in the Reagan White House. “They have legitimate reasons for trying, but as a speechwriter you have to weigh that against the need for the president to give a coherent message and not put everybody to sleep.”

Other addresses have made news with their turns of phrase.

President George W. Bush’s characterization of North Korea, Iraq and Iran as the “axis of evil” sparked an international debate.

Clinton’s 1996 speech became known for its declaration that the “era of big government is over.”

For an Obama speechwriter, there is a heavy emphasis on the writing because the boss, a successful author, has strong opinions about word choices, cadence and emphasis, said David Axelrod, Obama’s longtime message guru.

Obama launched the writing of Tuesday’s speech in an Oval Office session, during which he discussed with Keenan his overall goals and ideas about particular words and phrases.

This article appeared in print on page 2 of the February 11th, 2013 edition of Hamodia.