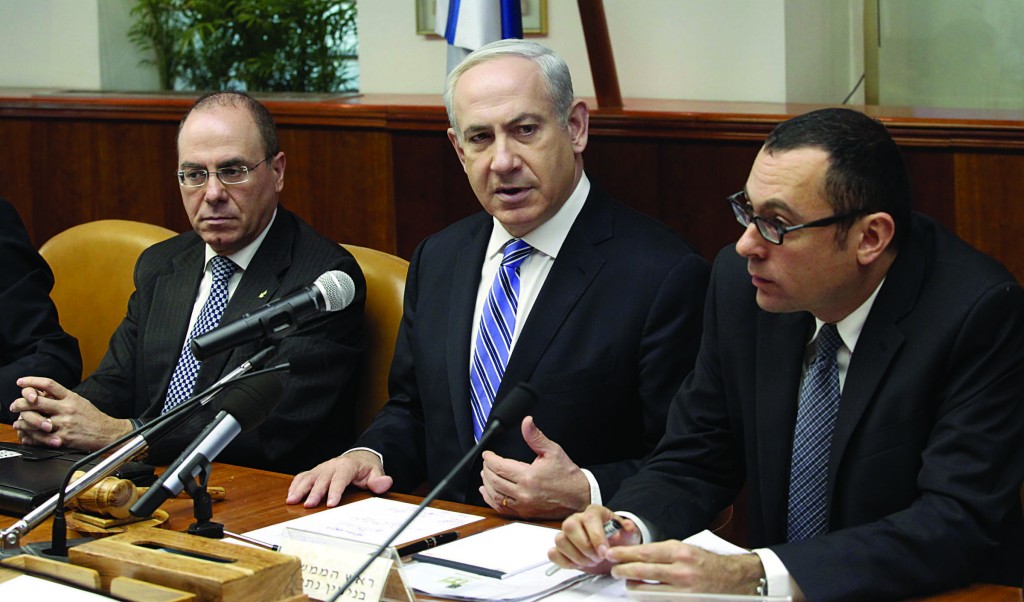 Conflicting claims about who will be the next foreign minister swirled around the coalition talks as a meeting between Israeli Prime Minister Binyamin Netanyahu and Yesh Atid leader Yair Lapid was held over the weekend.

While former foreign minister Avigdor Lieberman reiterated that Netanyahu has promised to keep the post for him when he can return to it after his trial on corruption charges, Likud sources were saying that the prime minister has yet to make a decision on the matter.

Lieberman told reporters once again that the deal he reached with Netanyahu in October, when Likud and Yisrael Beiteinu merged, gave him the right to choose among the government’s top three portfolios — defense, finance and foreign affairs — and he prefers the latter.

“The Foreign Ministry will remain with Yisrael Beiteinu,” Lieberman declared over the weekend.

But senior Likud officials tried to shoot down Lieberman’s claim of a right of return to the Foreign Ministry, insisting that whatever Netanyahu may have said in the past, he would decide on the Foreign Ministry appointment when the time comes. That time, they said, hasn’t come yet, The Jerusalem Post reported.

The Likud sources added that Netanyahu would not rule out the possibility of keeping the Foreign Ministry for himself.

Two factors militate against Lieberman: Lapid’s strong position and his own weakened one.

“The voter wanted Netanyahu to be prime minister and Lapid to be the senior partner,” Vice Premier Silvan Shalom of Likud-Beiteinu told Army Radio ahead of the Netanyahu-Lapid meeting Thursday night at the prime minister’s residence in Yerushalayim.

“And the voter also wanted there to be a national unity government … so we would like to see everyone inside,” Shalom said. “We are making every effort vis-a-vis the chareidim too.”

Afterward, they put out a statement that the meeting went very well and they will meet again soon.

Lapid’s fledgling party took 19 seats in the January elections, making it the No. 2 party in the country and a force that Netanyahu feels he must reckon with. However, statements made by Lapid since the elections about his future prime ministerial ambitions and a list of demands for ministerial posts have clouded any bright coalition prospects.

Lapid’s reported insistence on drafting yeshivah students in particular will make it difficult for Netanyahu to assemble the broad coalition, including the chareidi parties, that he desires.

Thursday’s meeting was designed to bridge some of the personal and policy gaps between the two.

Lieberman has sought to capitalize on Lapid’s missteps, and criticized him again in an interview on Motzoei Shabbos.

“My impression is that he is not conducting negotiations but dictating ultimatums,” said Lieberman. “He is acting like he sees himself as the de facto prime minister, and after a year and a half in the government he believes he will become the prime minister de jure.”

At the same time, Lieberman’s indictment puts his return to government in doubt, despite expressions of confidence that he will be vindicated. The Likud-Beiteinu merger may also be a stumbling block. Instead of boosting their electoral showing, the two parties lost Knesset seats, and some in the Likud view Lieberman as a liability, not an asset.

As Lieberman tries to undercut Lapid, Lieberman’s own former No. 2, former deputy foreign minister Danny Ayalon, was undermining him.

Ayalon opined that Netanyahu should appoint Lapid as foreign minister and not Lieberman.

“It would be strange [to appoint Lieberman], and it would harm Israel and its image,” Ayalon told Army Radio. “After the last term, that should be obvious to everyone with eyes in their head. Making him foreign minister again would not be learning from experience.”

“There was no reason for [the international community] to talk to him when he would not deal with key issues,” Ayalon said. “He was seen as irrelevant. I tried to rehabilitate things. On certain things I succeeded.”

However, he said that around the world Lieberman “was treated like a leper.”

“The greatest damage that he did happened when he said things and didn’t stand by them. He said that if [Palestinian Authority President Mahmoud] Abbas goes to the United Nations, Israel will topple the PA, and that didn’t happen. His statements harmed Israel’s deterrence and made Lieberman irrelevant in the international arena,” Ayalon said.

Ayalon said it was also a mistake to announce the advancement of the E1 construction plan near Yerushalayim following the U.N.’s decision to give the Palestinians non-member observer status.

He blamed Lieberman for the crisis with Ankara following an incident where the Turkish ambassador was placed on a low chair while he scolded him for an anti-Israel tirade. He said the crisis spiraled out of control because Lieberman did not let him apologize immediately after his comments, when he did not think cameras were running, led the news.

“In retrospect I regret that my apology did not come sooner,” Ayalon said. “I wanted to put out an apology immediately after the report, but Lieberman opposed it, so our message came out only after a few hours.”

Ayalon also revealed that he still did not know why he was pulled from Yisrael Beiteinu’s electoral list. He said Lieberman has yet to offer a proper explanation to him or senior party officials.

Lieberman dismissed Ayalon’s comments, observing that “he spoke about me in superlatives for four years. Only since I told him he was not on the list and explained why I have heard bad things from him, especially via the police. Now I am glad I left him off the list.”

In other coalition maneuverings, Likud officials confirmed that former foreign minister Tzipi Livni was likely to enter the coalition in return for a prominent say in negotiations with the Palestinians.

“Livni is a very important actor in politics. I will certainly be happy if she joins the coalition. We haven’t spoken about a specific post,” said Lieberman.

“It’s clear she will want to be involved in the negotiations with the Palestinians, but she isn’t entering a vacuum. There is someone who led these contacts for the past four years — Yitzchak Molko.”