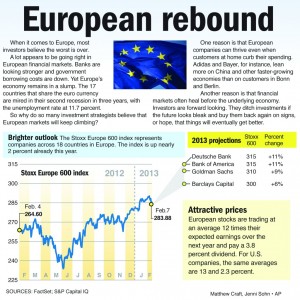 WASHINGTON (AP) – A jump in energy-related exports and a steep decline in oil imports lowered the U.S. trade deficit in December to nearly a three-year low.

The improvement suggests the economy grew in the October-December quarter instead of shrinking as the government estimated last week.

A brighter outlook for trade also illustrates how a boom in oil and gas production is reducing crude oil imports and making the U.S. a leader in the export of fuels. And it shows that higher domestic sales of fuel-efficient cars are lowering dependence on oil.

European Council President Herman Van Rompuy announced that the agreement had been reached after two days of nearly round-the-clock negotiations — the longest negotiations of his tenure in office. The final total was about 40 billion less than the European Commission had originally proposed.

The issue of what to give to the EU was made more difficult because, he said, its members were struggling with poor economic growth and harsh austerity measures.

Boeing Warns That 787 Deliveries Could Slip

Boeing acknowledged on Friday that it may not be able to deliver its 787 as fast as hoped.

The company said it has told customers expecting the next 787 deliveries that those planes have either been delayed, or at risk for a delay.

Boeing is still building the long-range, fuel-efficient planes, and it said on Friday that it has no plans to slow production.

This article appeared in print on page 9 of the February 11th, 2013 edition of Hamodia.