After Election, Rubio On Rise in GOP 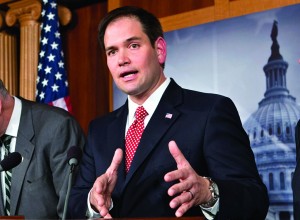 Marco Rubio is taking center stage as Republicans search for a new leader.

In the nearly 100 days since President Barack Obama won a second term, the Florida senator has taken calculated, concrete steps to emerge as a next-generation leader of a rudderless party, put a 21st-century stamp on the conservative movement and potentially position himself for a presidential run.

The bilingual Cuban-American lawmaker has become Republicans’ point person on immigration, and he pitches economic solutions for middle-class workers. He is an evangelist for a modern, inclusive party that welcomes more Hispanics and minorities, but says Republicans must stay true to their principles.

“In a way, he’s trying to save us from ourselves,” says Al Cardenas, the chairman of the American Conservative Union who gave Rubio his first job in politics as a South Florida field staffer during Kansas Sen. Bob Dole’s 1996 presidential campaign. “He gives us comfort against the naysayers who say we need to change our basic beliefs to attract a wider audience.”

Rubio will give the Republican response to Obama’s State of the Union address Tuesday. Rubio advisers say his rebuttal will offer economic prescriptions for a sluggish economy and try to counter what they call Obama’s government-centered economic approach.

The speech comes as demand for the 41-year-old son of immigrants has soared and the party has tried to recover from significant electoral losses and map out a path ahead.

Call it the “it” factor.

The former Florida House speaker has been on a Republican rocketship since 2010, when he knocked off Gov. Charlie Crist in a Senate race that showed the tea party’s clout. He introduced presidential nominee Mitt Romney at the Republican National Convention last year and attended dozens of rallies and fundraisers for the GOP ticket during the campaign.

His rise draws comparisons to Obama, who moved from Illinois senator-elect to Democratic presidential nominee within four years. Both win accolades for their oratory skills and sought a lower profile at the start of their Senate careers.

Since November’s pummeling, Rubio has taken a series of public and private steps to raise his already high profile and create the political, organizational and message framework he’d need should he decide to seek the White House.

On election night, Rubio promoted “upward mobility policies” and counseled Republicans to renew their pitch to people from minority and immigrant communities. He made a quick trip to Iowa in mid-November for GOP Gov. Terry Branstad’s birthday party, which placed him before influential party activists in the important electoral state. Branstad lauded Rubio as the “kind of inspirational leader that’s going to help point us in the right direction.”

Behind the scenes, Rubio has bolstered his political action committee, Reclaim America PAC, to help him raise money, elect fellow Republicans and essentially create a campaign-in-waiting.

Rubio, who took hard-line positions on immigration policy such as branding Sen. John McCain’s proposal in 2010 a form of amnesty, has shifted gears on the issue. He spent months meeting with different groups in the debate before releasing a set of principles with fellow senators that pairs increased border security with a possible path to citizenship for an estimated 11 million illegal immigrants.

Indeed, the focus on immigration could be a boon or a bust for Rubio. If he rallies Republicans behind a plan that offers some resolution, he could be connected to a big legislative victory. But if the plan draws the wrath of Republican activists, it could hinder his ability to seek the big prize in 2016.

This article appeared in print on page 2 of the February 11th, 2013 edition of Hamodia.