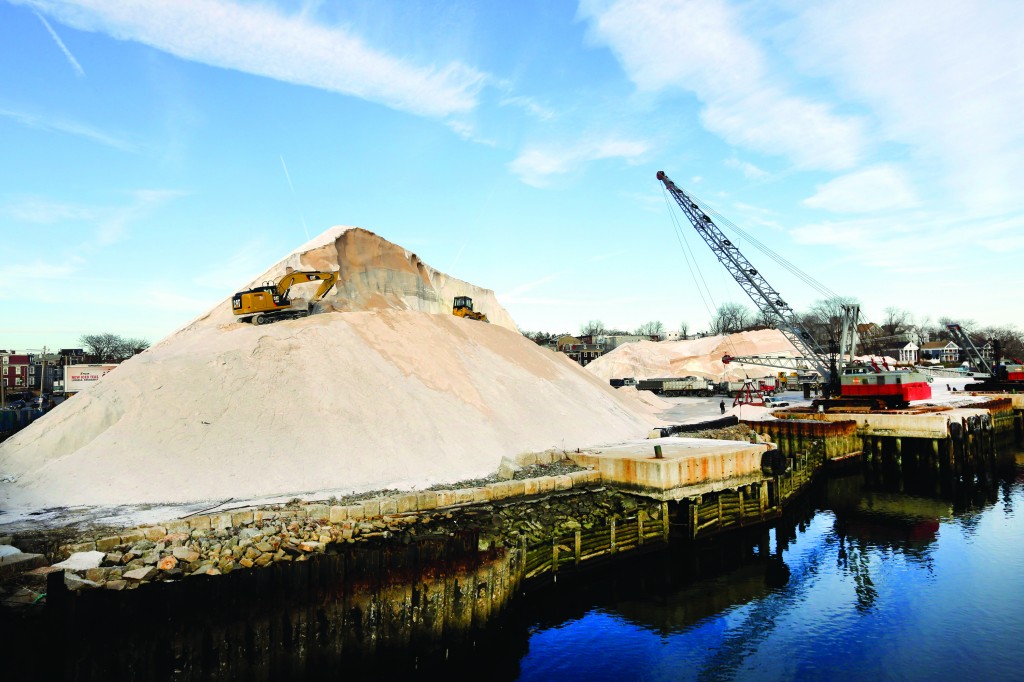 From New Jersey to Maine, people stocked up on food and other storm supplies, and road crews readied salt and sand ahead of what forecasters warned could be a weather history-maker. Boston and Providence, R.I., called off school on Friday, and airlines canceled more than 500 flights and counting, with the disruptions certain to ripple across the U.S.

At 4:25 Thursday afternoon the National Weather Service posted blizzard warnings for New York City and its suburbs, Boston, much of lower New England, and parts of New Jersey.

In Taunton, Mass., National Weather Service meteorologist Alan Dunham said southern New England has seen less than half
its normal snowfall this season, but “we’re going to catch up in a … hurry,” with 1 1/2 to 2 feet forecast.

“Everybody’s going to get plastered with snow,” he said.

The snow is expected to start Friday morning, with the heaviest amounts falling at night and into Saturday. Wind gusts could top 60 mph. Widespread power failures were feared, along with flooding in coastal areas still recovering from Superstorm Sandy in October.

New York City was expecting around 5 to 10 inches of snow. Mayor Michael Bloomberg said plows and 250,000 tons of salt were being put on standby.

“We hope forecasts are exaggerating the amount of snow, but you never can tell,” he said.

In New England, it could prove to be among the top 10 snowstorms in history, and perhaps even break Boston’s record of 27.6 inches, set in 2003, forecasters said. The storm is arriving just after the 35th anniversary of the blizzard of 1978, which paralyzed New England with more than 2 feet of snow and hurricane-force winds from Feb. 5-7.

The last major snowfall in southern New England was well over a year ago — the October 31 storm of 2011.

Parts of the New York region still cleaning up from Superstorm Sandy are bracing for the winter storm, Mayor Michael Bloomberg noted that if bad weather has to happen, it’s better to have it on a weekend.

On Long Island, Southampton Town Supervisor Anna Throne-Holst says officials are concerned about the impact of the storm in areas that were hit hard by Sandy.

The big storm heading for the Northeast is already disrupting air travel.

The aviation tracking site FlightAware shows United Airlines has already canceled more than 370 flights for Friday in advance of the storm. New England could get smacked with up to two feet of snow, while New York City is currently expecting 4 to 6 inches.

FlightAware shows that airports with the most cancellations on Friday are Newark Liberty, Boston’s Logan International and LaGuardia, in that order.

On Thursday, the biggest weather problems are in Chicago. O’Hare has seen 84 canceled departures.

Delta Air Lines Inc., which has a hub at New York’s LaGuardia, said it is still putting its weather plan together. As of midafternoon on Thursday it had canceled 99 flights for Friday, according to FlightAware. American Airlines has scrapped 43 flights.

United and Delta have both issued so-called “weather waivers,” allowing passengers flying in the storm-affected areas on Friday or Saturday to change their flight date without paying a change fee.

Having learned from storm mismanagement and the bad public relations that followed, U.S. airlines have rewritten their severe weather playbooks. They’ve learned to cancel flights early and keep the public away from airports, even if that means they’ll have a bigger backlog to deal with once conditions improve.

In addition, reservation systems have been programmed to automatically rebook passengers when flights are canceled. And travelers now receive notifications by email, phone or text message.