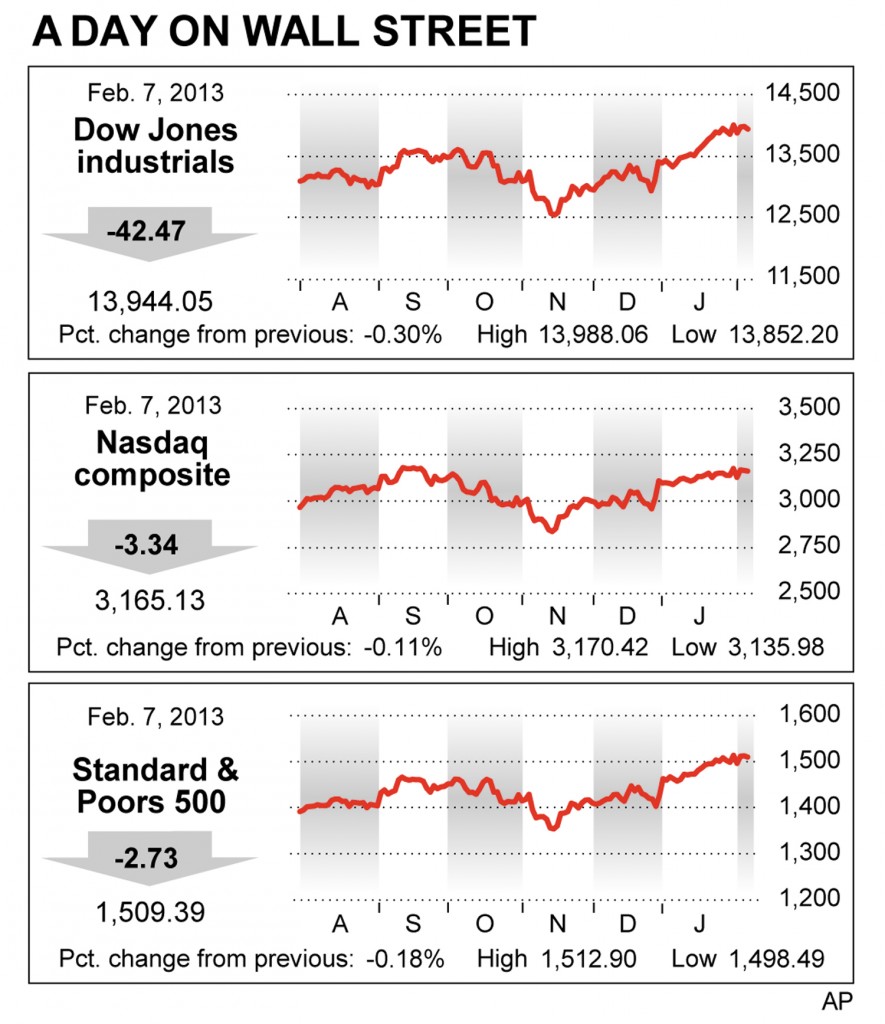 Stocks slumped on Wall Street yesterday, and the rally which has pushed indexes close to record levels stalled.

The Dow Jones industrial average fell 42 points to 13,944, after sliding as much as 134 points earlier. The index has edged lower this week, after logging its best January in almost two decades.

“We had such a big January, some type of weakness, or consolidation, make sense here to us,” said Ryan Detrick of Schaeffer’s Investment Research in Cincinnati.

The S&P 500 has lost an average of 0.58 percent in February over the last 20 years, making it the weakest month for stocks, according to research by Schaeffer’s.

Stocks fell as weaker earnings and worries about Europe overshadowed healthier signs for the U.S. economy.

But the stock price of News Corp. fell 66 cents, or 2.3 percent, to $27.52 after the media conglomerate cut its forecast for annual earnings. Weakness at several businesses, including its Fox broadcast network, should offset a gain in earnings in the most recent quarter.

Investors also worried about comments from European Central Bank president Mario Draghi. He pledged to keep a close eye on the rising euro, fearing that the currency’s rally in recent months could hurt exports and further harm the region’s fragile economy.

“You could have very weak growth in Europe for the next five or ten years,” said Michael Sheldon, chief strategist at RDM Financial Group. “There’s a lot of austerity going through the European markets, so it’s going to be a long time before they re-establish themselves.”

Most of Europe’s major stock indexes ended the day lower. Only Germany and Greece bucked the trend.

Europe has returned to investors’ radar screens after several months of relative quiet. Stocks fell on Monday, partly because of a spike in borrowing costs for Italy and Spain. That reignited concerns that those countries won’t be able to service their debts.

Still, some say that the decline is more of a pullback than a sell-off. That will give investors a chance to buy stocks at lower prices in anticipation of the market resuming its rally.

Stocks have jumped this year on optimism that the housing market will sustain its recovery and the job market will slowly heal. Corporate earnings growth has also accelerated.

As stocks fell yesterday, bonds rallied. The yield on the 10-year Treasury note, which moves inversely to its price, fell 1 basis point to 1.95 percent.

n Sprint Nextel Corp. fell 3 cents, or 0.5 percent, to $5.74. The country’s third-largest wireless carrier lost $1.3 billion in its latest quarter as it revamped its network to take on larger competitors. The company also lost 243,000 customers in contract-based plans.

n DeVry surged $4.29, or 16.4 percent, to $30.41 after the struggling for-profit education company reported better-than-expected earnings and analysts praised its cost-cutting and restructuring efforts.