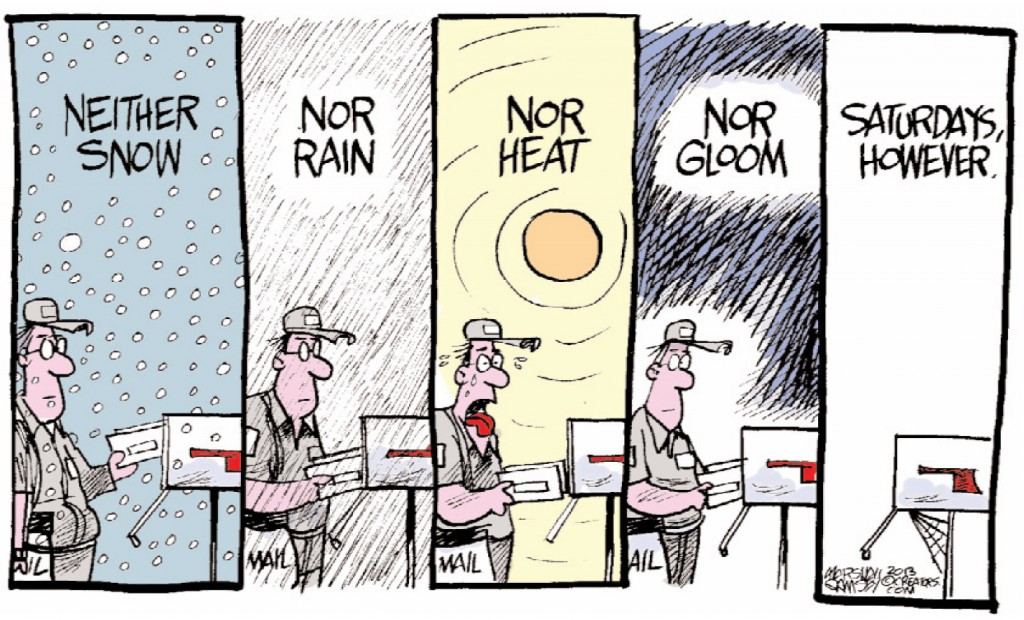 Saturday mail may soon go the way of the Pony Express and penny postcards. The Postal Service said Wednesday that it plans to cut back to five-day-a-week deliveries for everything except packages to stem its financial losses in a world radically re-ordered by the internet.

“Our financial condition is urgent,” declared Postmaster General Patrick R. Donahoe. But Congress has voted in the past to bar the idea of eliminating Saturday delivery, and his announcement immediately drew protests from some lawmakers. The plan, which is to take effect in August, also brought vigorous objections from farmers, the letter carriers’ union and others.

The Postal Service, which suffered a $15.9 billion loss in the past budget year, said it expected to save $2 billion annually with the Saturday cutback.

Mail such as letters and magazines would be affected. Delivery of packages of all sizes would continue six days a week.

The plan accentuates one of the agency’s strong points: Package delivery has increased by 14 percent since 2010, officials say, while the delivery of letters and other mail has plummeted. Email has decreased the mailing of paper letters, but online purchases have increased package shipping, forcing the Postal Service to adjust to customers’ new habits. 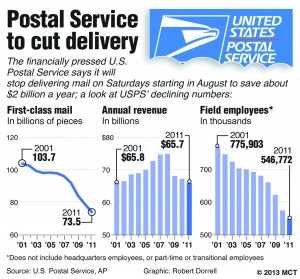 In fact, the Postal Service has had to adapt to changing times ever since Benjamin Franklin was appointed the first postmaster general by the Continental Congress in 1775. The Pony Express began in 1860, six-day delivery started in 1863, and airmail became the mode in 1918. Twice-a-day delivery was cut to one in 1950 to save money.

But change is not the biggest factor in the agency’s predicament — Congress is. The majority of the service’s red ink comes from a 2006 law forcing it to pay $11 billion a year into future retiree health benefits, something no other agency does. Without that and related labor expenses, the mail agency sustained an operating loss of $2.4 billion last year, lower than the previous year.

Congress also has stymied the service’s efforts to close some post offices in small towns.

Over the past several years, the Postal Service has advocated shifting to a five-day delivery schedule for mail and packages — and it repeatedly but unsuccessfully has appealed to Congress to approve the move. An independent agency, the service gets no tax dollars for its day-to-day operations but is subject to congressional control.

The proposed change is based on what appears to be a legal loophole — and that may be a gamble. Congress has long included a ban on five-day-only delivery in its spending bills, but because the federal government is now operating under a temporary spending measure rather than an appropriations bill, Donahoe says it’s the agency’s interpretation that it can make the change itself.

“This is not like a ‘gotcha’ or anything like that,” he said. The agency essentially wants Congress to keep the ban out of any new spending bill after the temporary measure expires March 27.

“Let’s see what happens,” he said. “I can’t speak for Congress.”

Two Republican lawmakers said they had sent a letter to leaders of the House and Senate in support of the elimination of Saturday mail. It’s “common-sense reform,” wrote Darrell Issa of California, chairman of the House Oversight and Government Reform Committee, and Tom Coburn of Oklahoma, top Republican on the Senate Homeland Security and Governmental Affairs Committee.

The Postal Service is in the midst of a major restructuring throughout its retail, delivery and mail processing operations. Since 2006, it has cut annual costs by about $15 billion, reduced the size of its career workforce by 193,000, or 28 percent, and has consolidated more than 200 mail processing locations, officials say.