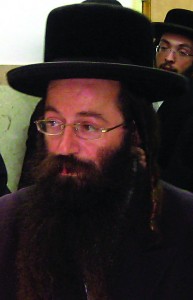 Communities on two continents mourned the sudden petirah of Reb Yisrael Leib Uri, z”l, whose ready smile — despite a lifetime of suffering — touched the hearts of all he encountered. The 36 year old Rachmastrivka chassid was attending a family wedding and was deep in conversation with one of his young sons when he suffered a fatal heart attack.

Shortly after his birth at a Yerushalayim hospital, doctors discovered a serious heart defect. As a child and as an adult, Yisrael Leib underwent numerous complex operations and medical procedures.

Seeking to aid the plight of his struggling parents, Yisrael Leib’s uncle, the Rachmastrivka Rebbe of Yerushalyim, zy”a, took the child into his own home, and he and, ybl”c, the Rebbetzin took the sickly boy into his own home and raised him like his own son.

“He merited in his youth to be raised at the knees of my father, the Rebbe, zt”l,” the present day Rachmastrivka Rebbe of Yerushalayim wrote in an open letter seeking to raise funds for the grieving widow and her three children. “He grew up in my father’s house, and served Hashem with mesiras nefesh,” the Rebbe adds.

Forced to frequently travel to the United States for medical treatment, he became a familiar, and much respected figure in New York community as well in Yerushalayim.

“He was filled with emunah in Hashem and emunas tzaddikim,” his cousin, Rabbi Shulim Herbst told Hamodia yesterday. “Despite his suffering he was constantly mechazek himself as he sought to continuously rise ever higher — together with his family members — in avodas Hashem.”

“Yisroel Leib was truly a extraordinary person,” an acquaintance told Hamodia. Despite all the tribulations, all the pain, the constant rounds to doctors, the years of physical therapy, he never uttered a word of complaint. He was always with a wonderful smile.”

His relationship with his three sons — the oldest of whom is only sixteen — was also described as remarkable. He devoted much time and energy to oversee their chinuch, and they have now lost a father, a teacher, a counselor, and their bastion of moral support.

He is survived by his devoted parents, his wife Mrs. Chumie Uri, nee Blau, and his three sons, Yochanan, Chaim and Reuvein.

Due to his pre-existing health condition, the niftar was ineligible for the areivim program or affordable life insurance. An urgent fundraising event on behalf of his widow and orphans will take place on Sunday night at the Boro Park home of Rabbi Hirsh Meilech Teitelbaum, a grandson-in-law of the Rachmastrivka Rebbe, shlita, and noted maggid shiur in the Rachmastrivka and Satmar kehillos. The address is 1220 42nd street, Brooklyn NY 11219. Checks made payable to Cong. Rachmastrivka can be mailed to the above address.

This article appeared in print on page D30 of the February 6th, 2013 edition of Hamodia.