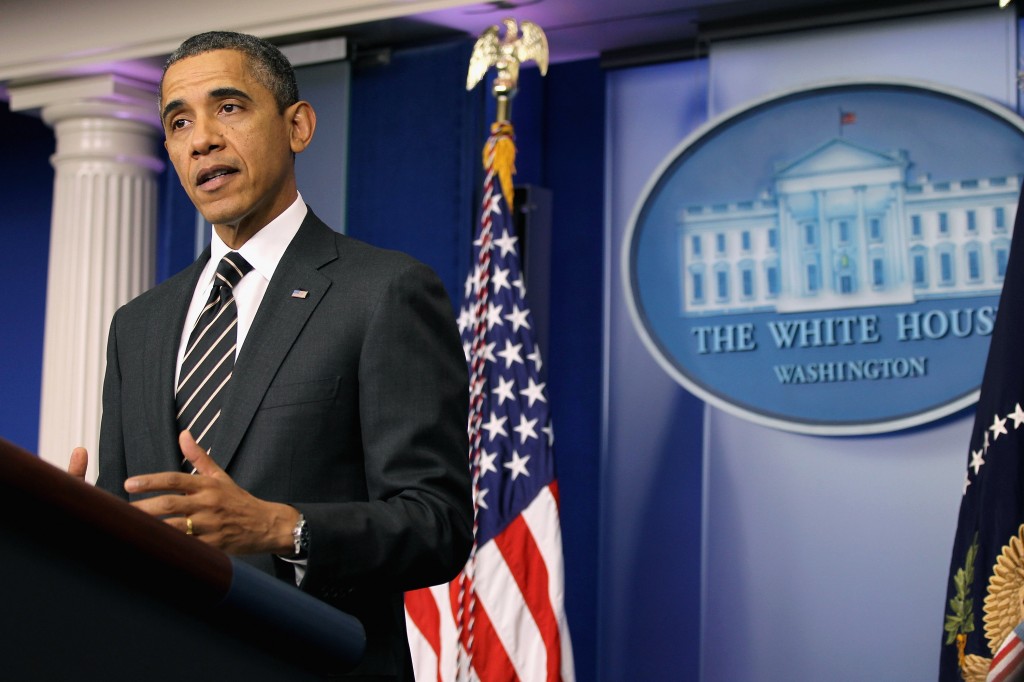 President Barack Obama is asking Congress for a short-term deficit reduction package of spending cuts and tax revenue that will delay the effective date of steeper automatic cuts now scheduled to kick in on March 1. Obama said the looming cuts would be economically damaging and must be avoided.

The president reiterated his insistence on long-term deficit reduction that combines taxes and cuts, a blend that faces stiff resistance from anti-tax Republicans in Congress.

Obama made his case Tuesday afternoon in the White House briefing room, just minutes after the Congressional Budget Office released revised budget projections that showed the deficit will drop to $845 billion this year, the first time during Obama’s presidency that the red ink would fall below $1 trillion. The budget office also said the economy will grow slowly in 2013, hindered by a tax increase enacted in January and by the automatic spending cuts scheduled to take effect this spring.

It is those cuts that Obama is seeking to put off with less onerous measures. Neither the president nor White House aides specified what those measures should be.

“There’s no reason that the jobs of thousands of American who work in national security or education or clean energy, not to mention the growth of the entire economy, should be put in jeopardy just because folks in Washington couldn’t come together to eliminate a few special interest tax loopholes or government programs that we agree need some reform,” he said.

Obama said Congress needs more time to work out a 10-year plan worth more than $1 trillion in deficit reduction. Obama did not place a time span or a dollar amount on the short-term plan. Officials said he will leave that to Congress. 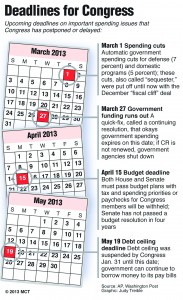 His request comes as some congressional Republicans were signaling that they might allow the automatic cuts to kick in as the only viable means of achieving deficit reduction, even though it cut into programs they support, such as defense.

The president’s request would continue what has become a common practice in Washington — dealing with fiscal issues in small steps in hopes that over time Congress and the administration are able to agree on broader and more lasting policies. In his remarks, Obama alluded to the incremental nature of the work ahead.

“Let’s keep on chipping away at this problem together, as Democrats and Republicans, to give our workers and our businesses the support that they need to thrive in the weeks and months ahead,” Obama said.

Finding deficit reductions of up to $85 billion would put off the automatic cuts, known as a “sequester” in government budget language, until the start of the new fiscal year.

Obama has insisted that any efforts to reduce the deficit be “balanced” between spending cuts and new tax revenue. Obama already won about $600 billion in higher taxes at the start of the year and congressional Republicans say they are not about to approve more tax revenue. While the Senate has a Democratic majority, the House is controlled by the GOP.

In a statement earlier in the day, House Speaker John Boehner, R-Ohio, said that additional tax hikes were out of the question.

“President Obama first proposed the sequester and insisted it become law,” Boehner said. “Republicans have twice voted to replace these arbitrary cuts with common sense cuts and reforms that protect our national defense. We believe there is a better way to reduce the deficit, but Americans do not support sacrificing real spending cuts for more tax hikes. The president’s sequester should be replaced with spending cuts and reforms that will start us on the path to balancing the budget in 10 years.”

The automatic cuts are part of a 10-year, $1 trillion deficit reduction plan that was supposed to spur Congress and the administration to act on long-term fiscal policies that would stabilize the nation’s debt. Though Congress and the White House have agreed on about $2.6 trillion in cuts and higher taxes since the beginning of 2011, they have been unable to close the deal on their ultimate goal of reducing deficits by about $4 trillion over a decade.

If the automatic cuts are allowed to kick in, they would reduce Pentagon spending by 7.9 percent and domestic programs by 5.3 percent. Food stamps and Medicaid would be exempt, but Medicare could take up to a 2 percent reduction, under the plan.

The automatic cuts were supposed to take effect Jan. 1. But Obama and congressional Republicans struck a New Year’s deal that extended Bush era tax rates for all but the wealthiest Americans and put in place about $24 billion in deficit reduction. That delay effectively postponed the automatic reductions to March 1.