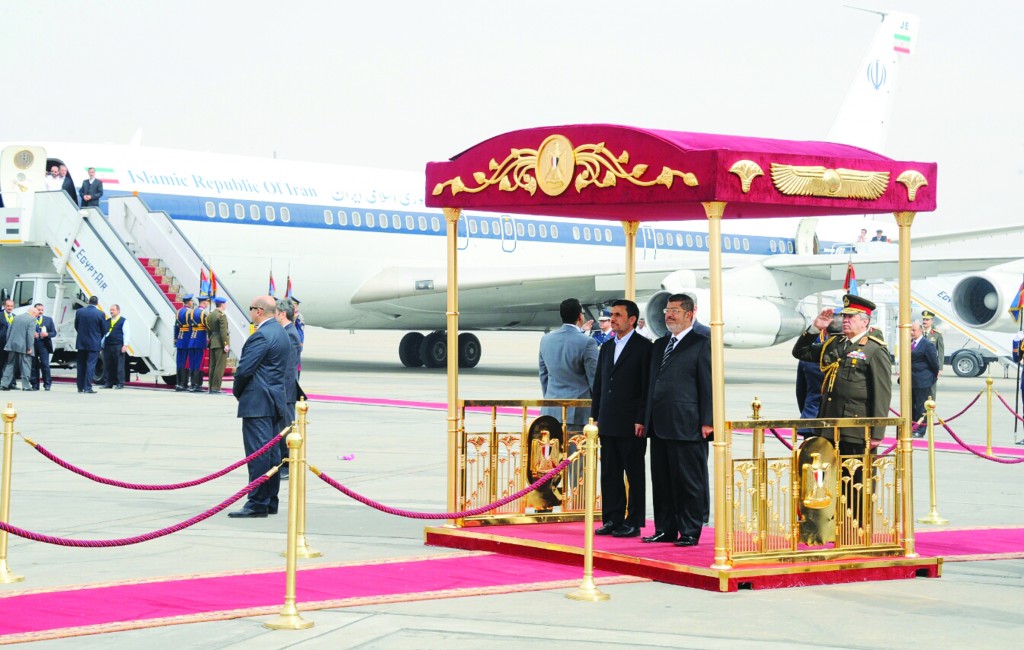 Iranian President Mahmoud Ahmadinejad arrived to a red-carpet welcome by Egypt’s new Islamist leader in a historic trip to strengthen relations between the two nations after decades of estrangement and suspicion.

Iran seeks a closer bond with Cairo as part of a strategy to broaden its influence in the Middle East at a time when Tehran’s closest ally, Syria, is enmeshed in a civil war and Ahmadinejad faces increasing pressure from Arab states in the Persian Gulf.

President Mohammed Morsi warmly greeted Ahmadinejad at the airport in a stark recognition of Egypt’s redrawn political landscape since an uprising toppled autocrat Hosni Mubarak two years ago. Mubarak had refused formal diplomatic ties with Iran, viewing the Shiite Muslim-led theocracy as a threat to the Arab Sunni Muslim world.

Those misgivings were quickly evident Tuesday when a leading cleric condemned Iran’s policies. But Morsi and his Muslim Brotherhood are intent on restoring Egypt’s stature as a leading regional power. Tehran views Cairo as a potential economic partner and pivotal player in the Palestinian-Israeli conflict. Iran is struggling with the prospect of losing influence in Syria while trying to survive Western sanctions over its nuclear program.

“I will try to pave the ground for developing cooperation between Iran and Egypt,” Ahmadinejad was quoted as saying by Iranian state media. “If Tehran and Cairo see more eye-to-eye on regional and international issues, many (issues) will change.”

Ahmadinejad’s visit is the first by an Iranian leader since Egypt gave sanctuary to the deposed shah during Iran’s 1979 Islamic Revolution. The bitterness intensified when Egypt signed a peace treaty with Israel. In the years before his downfall, Mubarak, a staunch U.S. ally, allowed informal exchanges but rebuffed overtures for a thaw.

The exuberant Ahmadinejad was once praised by many Egyptians for his defiance of the West. But since the revolution here gave rise to Sunni Islamists, he has become a curiosity, reviled by ultraconservatives mistrustful of Shiite ambitions and criticized by reformers over Iran’s crackdowns on civil liberties and anti-government protesters.

“Iran-Egypt relations are so complicated and deep that they will not be solved by one trip from the Iranian president,” said Masoud Salimi, a political analyst in Tehran. “We should not expect any breakthroughs. But there will be talks about the Syrian crisis that may bear fruit toward finding a solution.”

The three-day visit comes as Ahmadinejad and Morsi face potent challenges to their leaderships. Ahmadinejad’s power, notably in foreign policy, has been scaled back in recent months by Ayatollah Ali Khamenei, Iran’s supreme leader. Morsi has been trying to suppress days of protests against his rule that have killed more than 50 people and questioned the Muslim Brotherhood’s hold on the government.

Ahmadinejad is in town to attend a meeting of the Organization of Islamic Cooperation, which is certain to highlight the differences between him and Morsi over Syria. Morsi has sided with Gulf Arab countries in supporting the overthrow of Syrian President Bashar Assad, a possible outcome that could upset Iran’s ties with the terrorist groups Hezbollah in Lebanon and Hamas in the Gaza Strip.

Egypt relies on $1.3 billion in U.S. military aid and needs Western support for a $4.8 billion loan from the International Monetary Fund. Yet Morsi has also been adamant to show that Egypt’s new foreign policy will not mirror the pro-Western leanings of Mubarak.

“I don’t believe there will be tangible economic or political developments coming out of this visit. It’s just a message to the Gulf and U.S.,” said Magdy Sobhi, an analyst at the Al-Ahram Center for Political and Strategic Studies in Cairo.