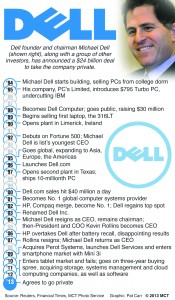 Dell to Go Private in $24.4B Deal Led by Founder

SAN FRANCISCO (AP) — Slumping personal computer maker Dell is bowing out of the stock market in a $24.4 billion buyout that represents the largest deal of its kind since the Great Recession dried up financing for such risky maneuvers.

The complex agreement announced Tuesday will allow Dell Inc.’s management, including eponymous founder Michael Dell, to attempt a company turnaround away from the glare and financial pressures of Wall Street.

Dell stockholders will be paid $13.65 per share to leave the company, 25 percent more than the stock’s price of $10.88 before word of the buyout talks trickled out three weeks ago. It’s a steep markdown from the shares’ price $24 six years ago when Michael Dell returned for a second go-round as CEO.

The credit-rating agency gave high marks to mortgage-backed securities because it wanted to earn more business from the banks that issued the investments, the Justice Department alleges in civil charges filed in federal court in Los Angeles.

The government is demanding that S&P pay at least $5 billion in penalties.

TOKYO (AP) — An investigation into a lithium ion battery that overheated on a Boeing 787 flight in Japan last month found evidence of the same type of “thermal runaway” seen in a similar incident in Boston, officials said Tuesday.

The Japan Transportation Safety Board said CAT scans and other analysis found damage to all eight cells in the battery that overheated on the All Nippon Airways 787 on Jan. 16, which prompted an emergency landing and probes by both U.S. and Japanese aviation regulators.

They found signs of short-circuiting and “thermal runaway,” a chemical reaction in which rising temperature causes progressively-hotter temperatures. U.S. investigators found similar evidence in the battery that caught fire last month on a Japan Airlines 787 parked in Boston.

The Institute for Supply Management said Tuesday that its index of non-manufacturing activity dipped to 55.2 in January, down from 55.7 in December. Any reading above 50 indicates expansion.

The modest decline from December’s strong reading suggests the industry was not greatly hampered by an increase in Social Security taxes that reduced take-home pay for most Americans.

TOKYO (AP) — Toyota Motor Corp. raised its fiscal year profit forecast Tuesday to triple what it eked out for the disaster-struck previous year, as the world’s top automaker continued on a comeback roll as sales surged, especially in the U.S.

Underlining its solid recovery, Toyota is now expecting fiscal year profit of 860 billion yen ($9.3 billion). It had initially expected a 780 billion yen ($8.5 billion) profit. It had marked a 283.5 billion yen profit through March 2012.

This article appeared in print on page D38 of the February 6th, 2013 edition of Hamodia.